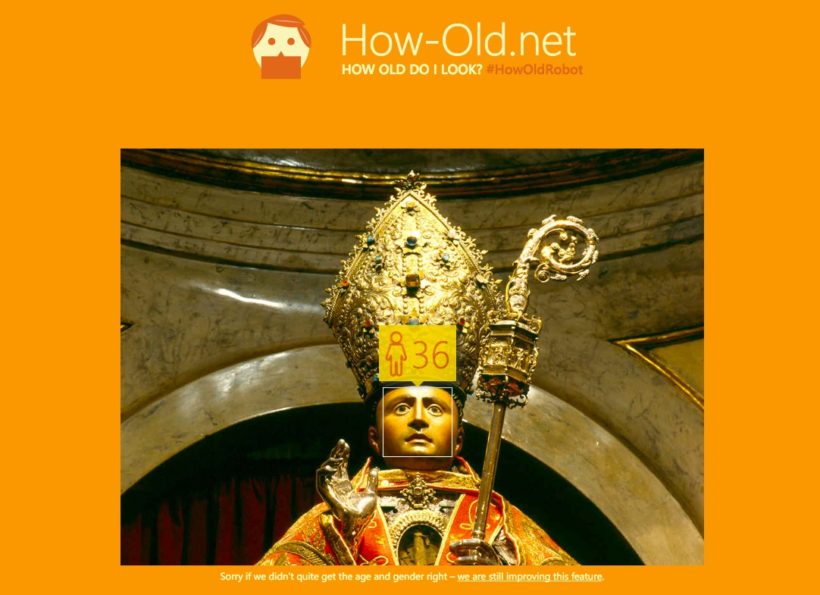 At some time a lot of you have probably thought about putting Caravinagre and San Fermín through the Microsoft application that attempts to forecast the age from the image… well, we have done so and the #howoldrobot tells us that Caravinagre is 66 years old, San Fermín is 36 and the ‘Europe’ Giant is 33. The average age of the Giants and their retinue is 35, with widely different predictions being made. 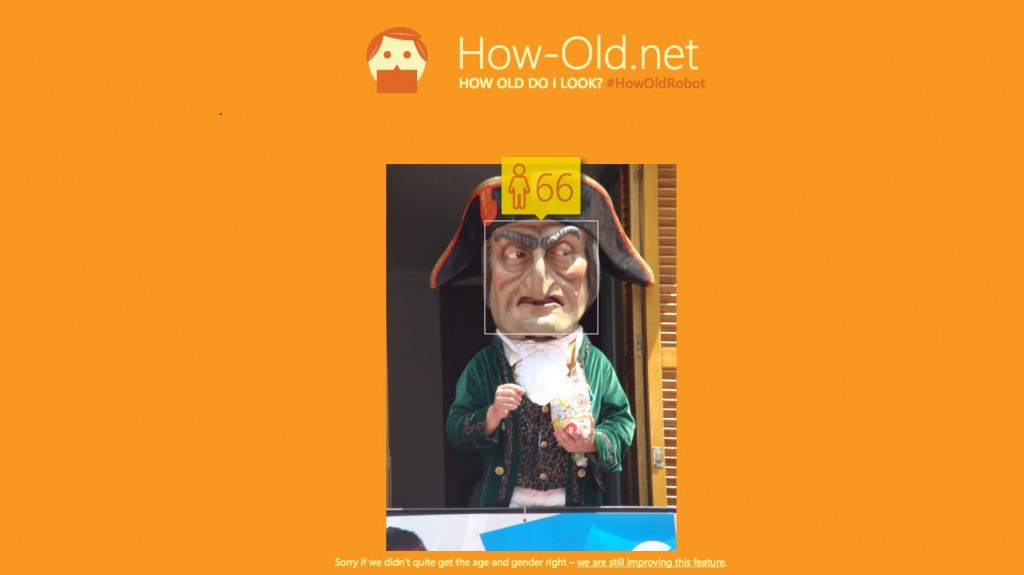 In the case of Caravinagre, the prediction made by the appliance is a bit scary because it is quite close to the truth. This particular “kiliki” is in fact 74 years old. Caravinagre was made in the Porta-Coeli workshops in Valencia in 1941. However, in the case of San Fermín and some of the giants, the forecasts are not so realistic; indeed, the gentle features of the saint and some of the giants made by Tadeo Amorena are a long way older than the thirties. Perhaps the appliance fails here because of the smooth features of these sculptures…

How-old.net has become very popular and well-known in spite of the fact that everything began just as a stratagem in order to carry out a demonstration by two Microsoft engineers at a Congress. This appliance, now so popular, came into being as a result of a stratagem used to demonstrate the capacity of the Azure system from Microsoft that allows APIS to be developed to show machines how to do different tasks (‘machine learning’). These FACE APIs from Microsoft, which integrates this system, can gather identities, age, sex, etc…  and after trying out this stratagem we have to admit that there is no doubt about its potential for the future. 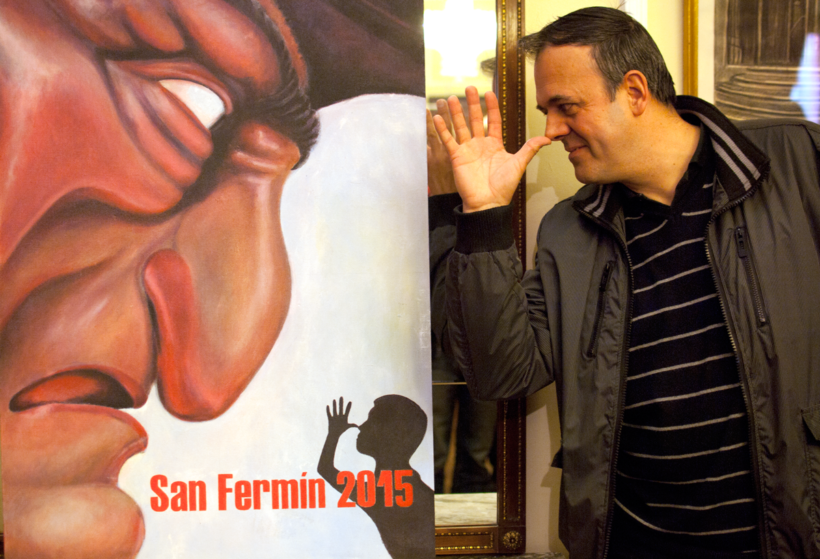 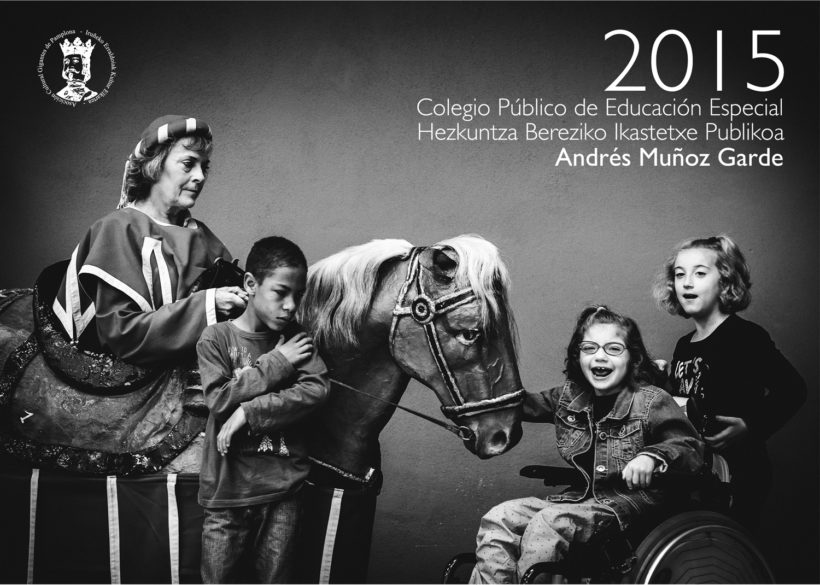 This Saturday the 2015 Calendar goes on sale for five euros which has been produced by the Public College Andrés Muñoz Garde school in Pamplona. The calendar features as protagonists both the pupils and the different paper-maché characters from the Sanfermin Giants and Bigheads Entourage.

Sales of the calendar will be made along the route taken by the entourage on the feast day of San Saturnino, patron saint of Pamplona. This parade will start at 9.15 a.m. from the Coach Station in Pamplona. After the parade the calendar can also be bought at the school located at nº 27 Pedro I Street.

The photo session took place at the beginning of last November and it was a great fiesta occasion for the pupils in the school. The photography work remains concealed in among so much lying, so much kissing and hugging and the result is highly acclaimed as can be checked out from the images found on the school blog page. 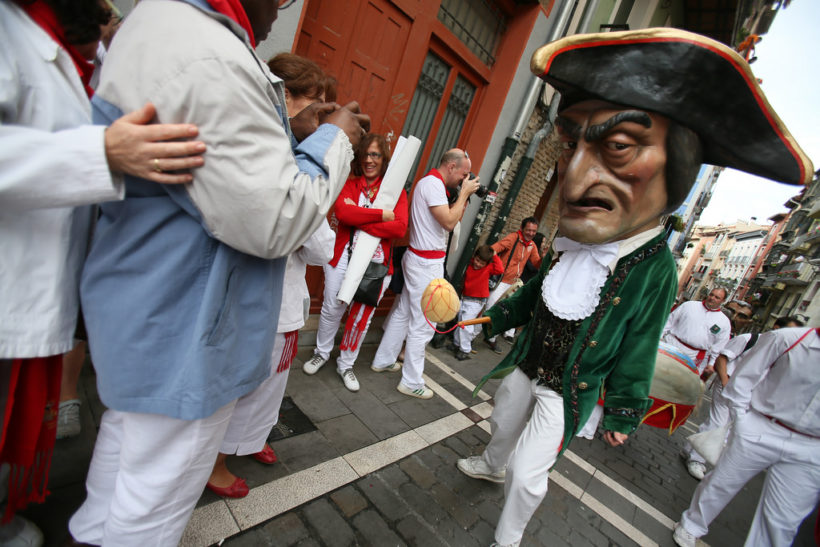 The terror of all the kids in Pamplona, and indeed, the rest of us as well; Caravinagre. There are various big-heads among the entourage of The Giants but the worst one is, without any doubt, this one. In this photo, we can see how he is already lurking in wait for the camera, which, after taking his photo, will then get what it deserves for daring to photo his fearful face. 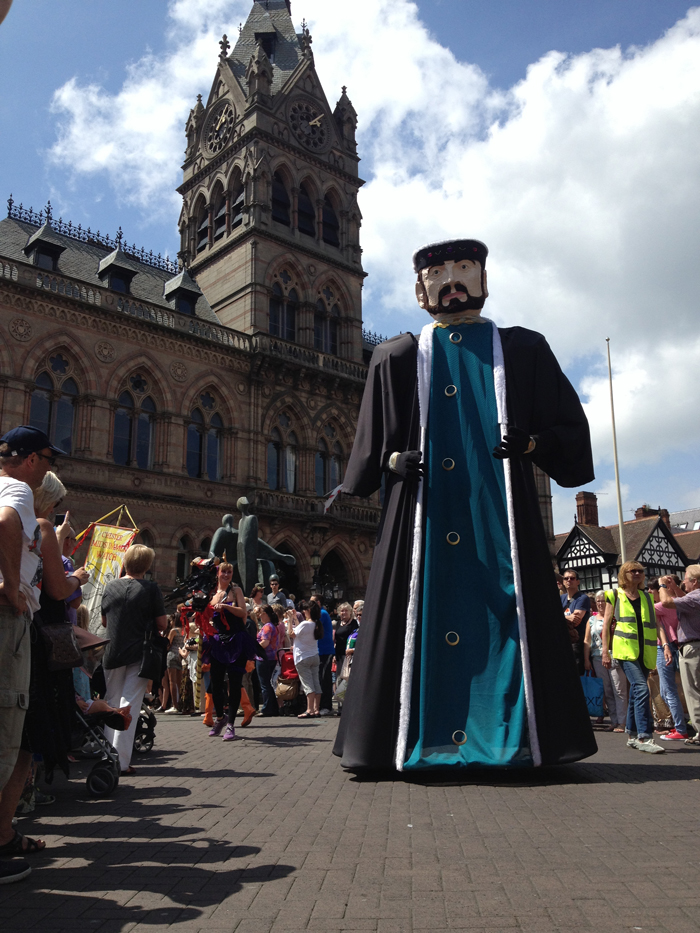 The picture is familiar in many ways, but the setting is not.
Beyond the Walls – Echoes in a different country, by Mat Dowsett
Spanish Language version (here)

I have a wonderful book that describes all of the giants of Navarra with histories and pictures. The “gigantes” have become one of the features of Navarran fiestas that we love the most and that we look forward to seeing the most. Now that we have a young daughter we are looking forward to taking her to see these incredible creations in towns up and down the ancient kingdom.

But look closely at the picture and you will see that the background is a little less familiar. In fact this is not Navarra, not even Spain. This is England. In Chester, an ancient Roman city in the North West of England, close to Liverpool, at Midsummer every year they have a parade of many different kinds of animals, figures and mythical creatures. Included in this parade is a family of Tudor giants – a father, mother and two daughters. They proudly take their place and parade through the streets with the rest of the characters and it is a scene that reminds me distinctly of Navarra.

You might think that Chester has taken inspiration from Northern Spain but incredibly the history of this period is no less than 500 years old. The Midsummer parade was very popular in Tudor England and was first recorded in 1498 when Chester was unique in England for having an entire family of giants. Sadly the parade was abandoned in the 1670s but was revived 25 years ago in 1989 and has found a place in the hearts of the people of Chester once again being a colourful parade accompanied by music, drums, dancers and led by dignitaries of the city.

It is also interesting to note that there is also a parade of giants in Chester on a number of occasions through the year with many other giants (many much more modern in conception) joining the more traditional. So that it can truly be said that Chester in Cheshire is the spiritual home of English giants. 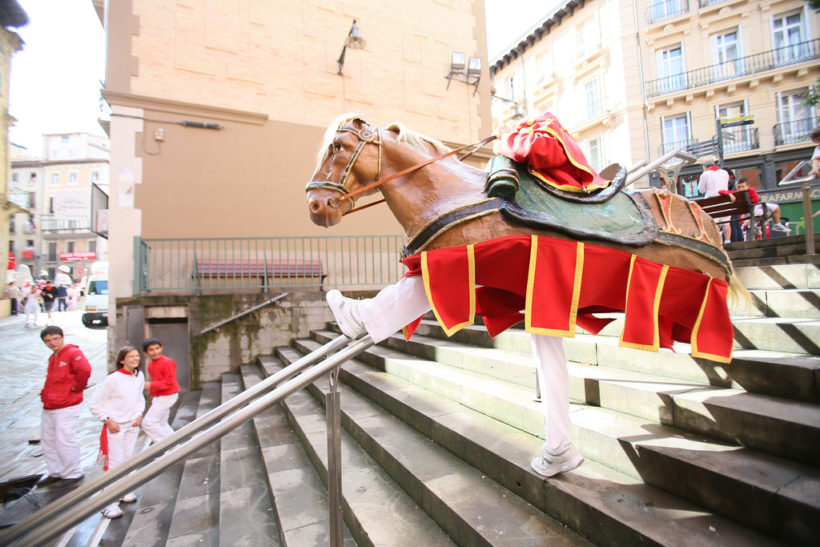 Every year in Sanfermin we’ve found lot of things everywhere, but this year is the first time we’ve found a beheaded “zaldiko” trying to get on a railing. This happened the past 14th July while The Comparsa was doing the traditional farewell, and they were few the lucky ones that saw this.

As you can see from the video, during yesterday’s procession in honor of San Fermín, the man carrying  Braulia, the American Queen, suffered a twisted ankle and   caused the giant to suffer this resounding fall just at the end of the Calle Mayor Street.

As a result of the accident, Braulia was almost toatally decapitated and suffered some serious damage to the neck. The figure had to taken out of the procession and repaired as quickly as possible, to ensure that it can continue to appear in the different parades which will take place over the coming days.

It seems that the repair work was successfully carried out as Braulia has appeared today completely restored as if nothing had ever happened. this is by no means the first time that these giant figures have suffered mishaps from falls. It happened to the African Queen not so long ago, when her nose was damaged after the man carrying the figure slipped up in the parade. (See the fall here) 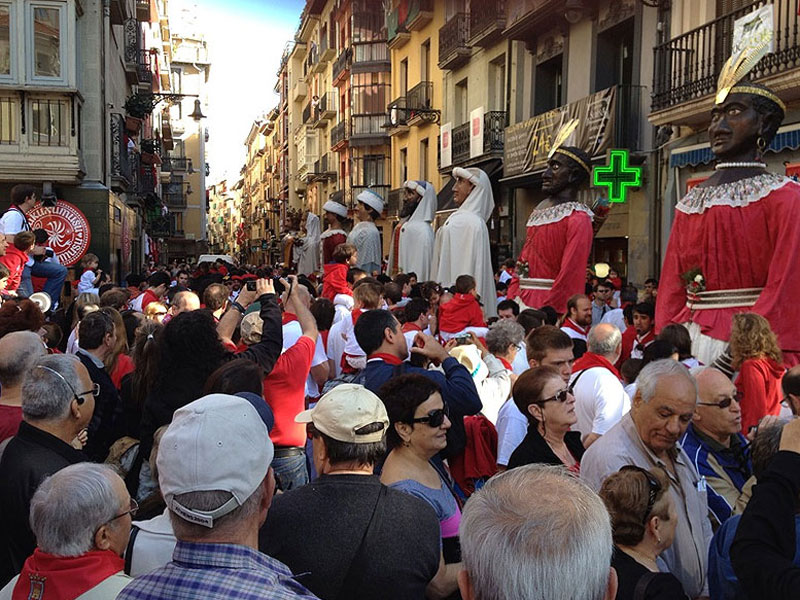 Exactly in the year when two of the Kilikis figures, “Patata” and “Napoleón” are celebrating their hundredth annivesary, as well as two of the Zaldikos, the number one and number six, the whole entourage of the Giants and their figures have visited one of the Kukuxumusu Drawing Factory stores and they danced for all the public who happened to be nearby.

Just after ten o`clock this morning, the Giants’ Entourage made a stop on their daily parade through the streets ,in front of the Kukuxumusu store and dedicated a special dance to the firm. In exchange a small aperitif was handed round by Kukuxumusu staff to keep up the strength and spirits of the giant-sized figures and their followers so as to be able to continue their parade in front of the citizens of Pamplona around the city, as they do each morning of fiestas. 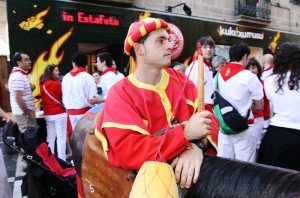 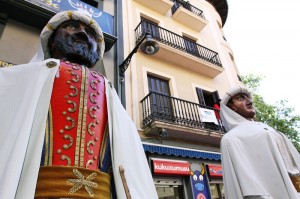 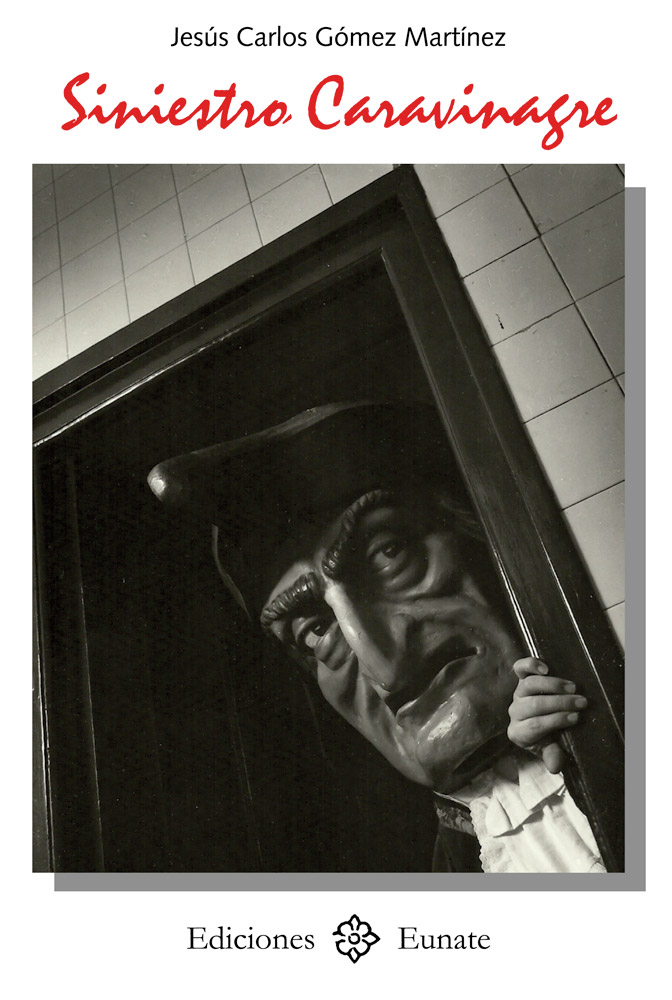 The Pamplona writer Jesús Carlos Gómez Martínez has just launched his latest book and the theme is the Sanfermin fiestas. The novel in its original Spanish version goes under the title “Siniestro Caravinagre” and the book features the popular Kiliki figure of Caravinagre (‘Vinegarface’), the detective Zero and the writer himself who has narrated the story. He gives us a singular view of Caravinagre, – dark, malicious and cruel. As the author states on the back cover of the book, the same character has threatened the author and all the readers who dare read the book. The book is now on sale at all bookshops in Pamplona in an edition from the publisher, Ediciones Eunate. The book is quite short with just 118 pages and it goes on sale at a price of 16 euro. ISBN: 978-84-7768-226-4

Jesús Carlos Gómez Martínez has long had a special relationship with the Sanfermin fiestas ever since he won the First International San Fermin Journalism Prize in 1991. He is also author of La historia Secreta de los Kilikis de Pamplona and of Sanfermines forever. On his own web page there is a full list of the prizes and awards earned by this writer.