Kukuxumusu edits Sanfermin.com and also designs T-shirts for all the partying and what's more, finds time to create plenty of fun and even to have lots of fun, during the fiestas

Kukuxumusu is a firm from Iruñea/Pamplona that, among many other things, is in charge of running Sanfermin.com to help people learn all about the Sanfermin fiestas in a practical and fun way.

Kukuxumusu has had a close relationship with the Sanfermin fiestas even since the firm first came into being, back in the Sanfermin fiestas of 1989. For that reason, Kukuxumusu dedicates an important part of its time to creating ideas, drawings and T-shirts with which to have fun with during the greatest fiesta party in the whole wide world.

The T-shirts of the running of the bulls
Kukuxumusu offers a new and complete collection of T-shirts every year for Sanfermin fiestas as well as some other articles and items that help dress the whole fiesta scene in blazing colors of red and white and which are filled with singular humorous drawings to liven the scene up with. Within the new collection there is always one special drawing of the year, a special unique T-shirt that pays homage to some aspect of the Sanfermin fiesta which captures some singular aspect of the fiestas in a humorous and fun way and which people can wear to raise some smiles and laughs.

These T-shirts can be purchased Online.

In addition, every year Kukuxumusu thinks up some new things to do to contribute to the fun scene in Sanfermin, as you can see at our blog page.

Mr. Testis is the main protagonist of the running of the bulls in the Kukuxumusu drawings. He is blue, pot-bellied and has yellow horns and he is always seen in the nude. It is a long time now since he has remembered that he was originally brought in to run the running of the bulls. Mr. Testis has stayed around to enjoy the Sanfermin fiestas and some of the things Kukuxumusu get up to during the rest of the year.

Mr. Testis is getting involvement each year in more and more things. Ever since he abandoned the two-dimensional drawings and became a giant teddy he can be seen at any hour in any place during the Sanfermin fiestas. Wherever there is a party, Mr.Testis is likely to appear.

Mr. Testis is also a compulsive looker-on. He enjoys all the best sites for watching the happenings in the fiestas. From some eighty balconies, throughout the fiestas Mr.Testis can be seen appearing on the balconies as an exceptional looker-on.

Kukuxumusu loves the have the foreigners come to town. That’s why, ever since 1996, it organizes a “Guiri Day” for the foreigners in homage to the foreigners who come from all over for the fiestas. In this way, Kukuxumusu wishes to recognize their contribution to the fiestas and show the real image of these many foreigners. Without them the party would not be the same.

In 2004 an award was created for the “Guiri del año” (foreigner of the year) where the stimulus of some particular foreigner to the Sanfermin fiestas is acknowledged. Each year Kukuxumusu travels to that person’s country to hand over the award. The award is made up of a kind of commemorative figure of a globe with horns Then, during the fiestas a special meal is held for the winner which is attended by the previous years winners and some representatives from Kukuxumusu. Here, although many different tongues are spoken, everyone understands each other perfectly. 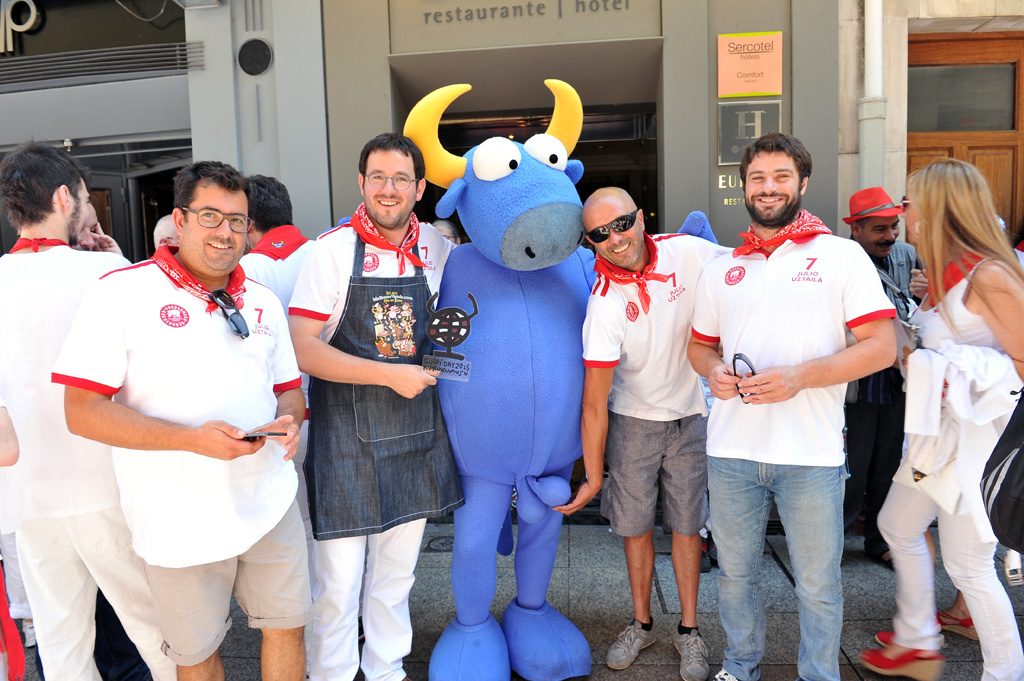