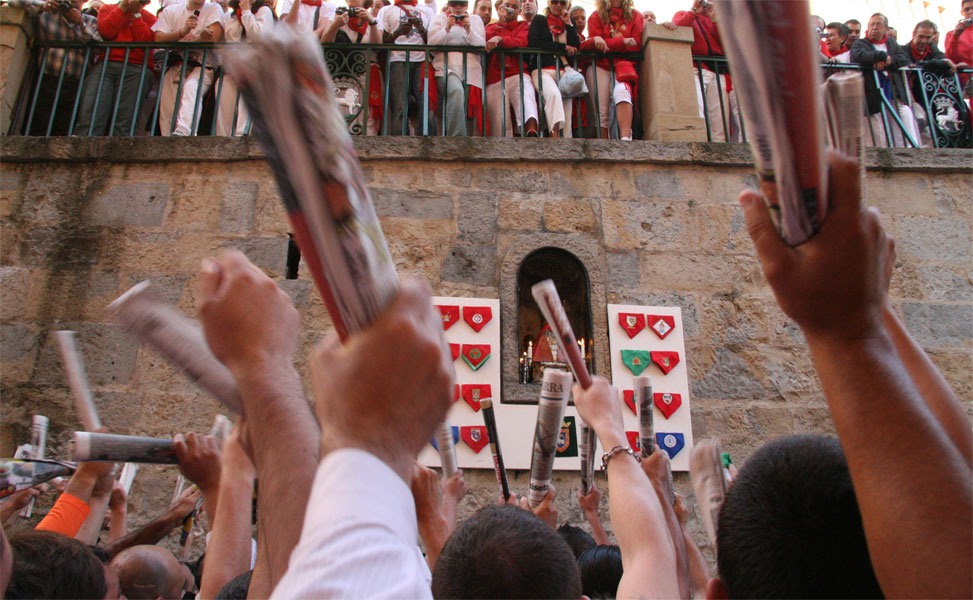 Before the start of the Running of the Bulls, the runners located at the first stretch in Santo Domingo sing a homily to beseech the protection of San Fermín, patron saint of the fiestas

Just before the run starts, the runners gathered at the first stretch of the course at the slope of Santo Domingo Street beseech the protection of San Fermín, patron saint of the fiestas by singing a short homily which goes:

Since 2009, this is also sung in Basque language as some of the runners wish to have it sung in that language:

As to the origins of this homily there is some general confusion. This is due to the fact that its authors and those who made it known worldwide are not one and the same. Really this song first became well-known in a different milieu – as part of the repertoire of a musical group from Navarra called the Los Iruña´ko. They made it as well-known as their own extensive career in music proved to be throughout the decades of the 50s and 60s of the XX century.

However, the original authorship goes back to a group of friends in Pamplona during the early years of the 1950s. They wrote the words and air at that time without thinking of it being actually sung to the image of the saint before the Running of the Bulls. The famous group Los Iruña´ko recorded their version and as such it is legally registered for Columbia Records and for Zafiro and it is exploited on iTunes by Open Records. After the homily had become so celebrated back in those years, several runners in the early sixties started to sing it before the bullrun and in this way the tradition began to set in to sing the homily each morning before an image of the saint placed in a niche on the wall in Santo Domingo.

The “Little Cape” of San Fermín

A “capotico” is the little cape which covers the figure of the saint while it rests in the chapel within the church of San Lorenzo. All the copies of this figure, such as the small one in the niche in Santo Domingo, also show the saint with this little cape covering his body. Within the world of bullfighting there exists an expression “to toss the cape” meaning to help a bullfighter who finds himself in a dangerous situation and this has become a well-known and popular saying, very similar to the sense of the English expression of “throwing someone a line” when they are in a tight spot. Thus, it is said that San Fermin lends a helping hand when he makes a “capotico” to get some runner out of a tight corner.