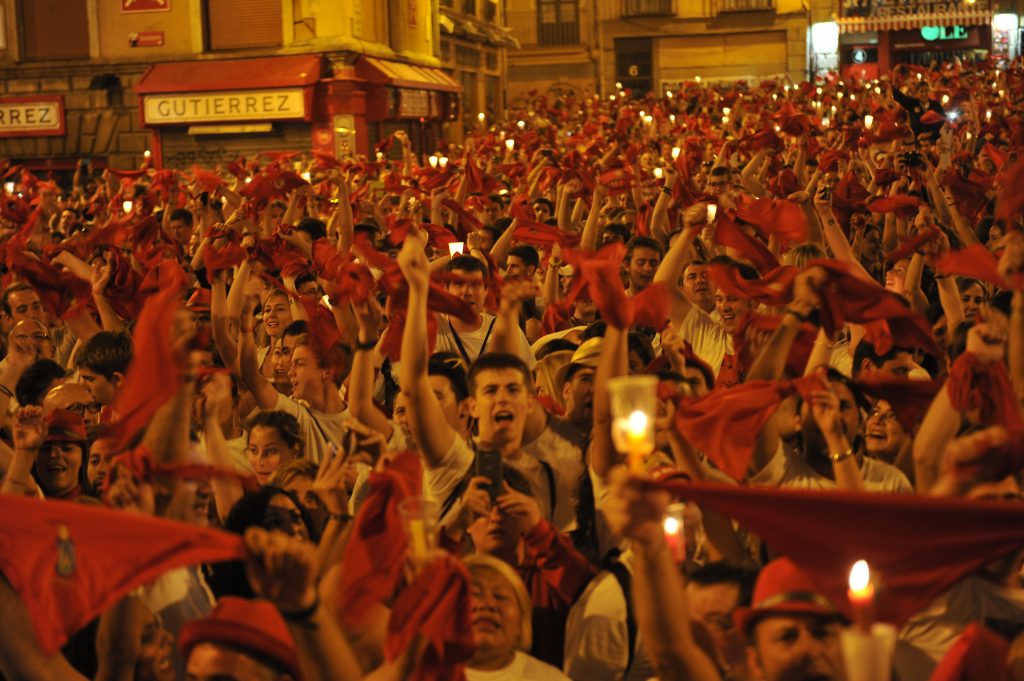 At midnight on the 14 th July the fiesta formally closes with the ceremony called the "Pobre de Mí."

This takes place in front of the Town Hall, where the fiesta was opened 8½ days earlier. There are other events also taking place in the city, (such as the Peñas gathering in the main square – the Plaza del Castillo, for their own celebration).

However, in front of the Town Hall a large crowd gathers to sing “Pobre de Mí, Pobre de Mí, que se han acabado las fiestas, de San Fermín.” (Poor me, poor me, for the fiesta of San Fermín has come to a close).

This is a very sad occasion because it is the end of the fiesta, (though many are relieved because they cannot take any more), but they still look forward to next year and even sing “Ya falta menos” (there is not long to go).

Unlike the Txupinazo there is not too much of a crush at the Pobre de mí. Children can attend without too much hassle. The only problem is to watch out for fallen candlecrease. It’s a custom to attend the closing night with a lighted candle. However, most people have sense enough to keep the lit candle within a plastic cup. And that’s that, the fun is over for another year. Although there are many people who refuse to face up to the fact.

They stubbornly continue partying through the night despite the fact that the city is returning to normal. Bar after bar pulls down its shutters. In the early morning light these last lonely revellers seem out of place on the quiet streets. The only thing to do is to run the encierro de la villavesa.

The red necktie is a classic symbol of the Fiestas. It is put on when the rocket goes off at 12.00 midday on the sixth of July. And it is worn until the closing of the Fiesta on the night of the fourteenth, when the Pobre de Mí – (Poor me) is sung by the sad crowd. Here, the multitude gather once more under the facade of the Town hall, in the gloom of the midnight air, with glimmering candles in hand, to bide a sad farewell to the Fiesta for another long year.

In the last years a new fad has come into fashion – so new that there is no official name yet for this rite – whereby the people, after having sung their sad farewell to the Fiesta, head for the church of San Lorenzo, where the statue of the Saint is kept, and they deposit their necktie and candles on the gates of the old church.

This Rite is becoming increasingly popular, despite the dim view taken by the authorities. The problem is that the greasy candles leave a pool of dirty grease on the ground and the local Parish Priest was the first to protest against this “vandalism” in the local press when the custom began. No doubt, as soon as a solution is found for getting rid of this mess, the rite will become officially accepted, as has happened with so many other customs throughout the long history of the San Fermin Fiesta