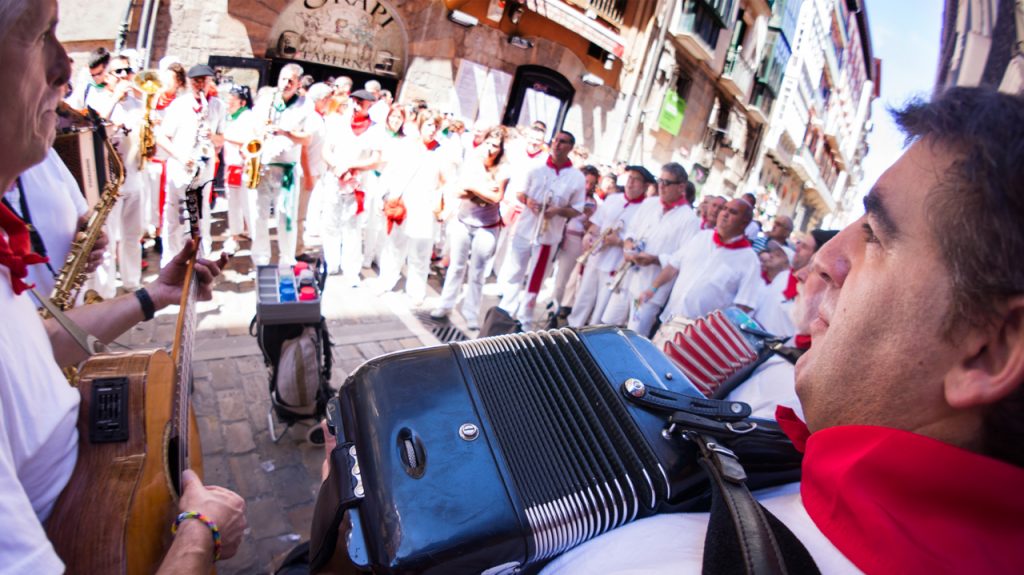 At all hours of the day and especially at night spontaneous groups are forever playing just for fun.

At all hours of the day and especially at night spontaneous groups are forever playing just for fun. But the quality is usually good: txalaparta, groups from East Europe, African music, groups from the Andes, new and old rock players, etc. Sometimes they also dance. It’s not something you will find in the programme. It just depends on when and where you are.

Of course, there are also admission concerts at night and open-air dances for free. You can have a look at the official programme. In the mornings there are also singing concerts on offer. 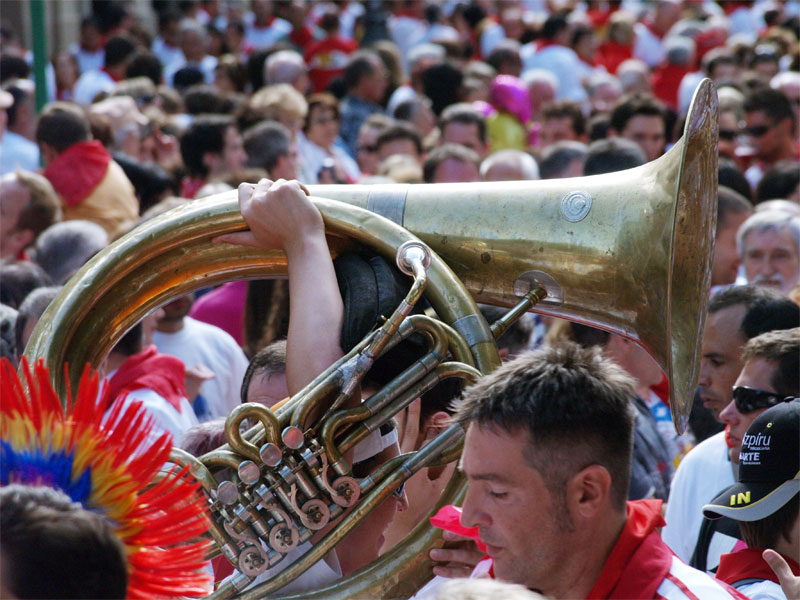 Music during Sanfermin is, above all, Brass-band music (rass bands that you meet up with all over the streets of the old part of town). That is to say, the typical loud wind instruments and the big drum.This is the music of the “Peñas”. When you come, you will get an overdose of this continual “Thump-thump” beat. Even days after the Fiesta is over, you will have that sound echoing round your head.

The hymns of the “Peñas” are the best pieces from this limited “repertoire” of the brass bands. They play them day and night at all hours and in all sorts of places, but mainly in the street But they are at their most characteristic during the bull-fights and immediately afterwards when they parade out of the ring. All the old traditional tunes of Sanfermin are of a similar style: the riau-riau, the ice-box cart, the squad gets up, the boss is a bollocks, etc. This music is bellowed out without inhibitions.

The “Peñas” can be seen every day and night except the 6th. and especially in the old quarter of the city- around Jarauta street. They are continually instigating impromptu dances in the streets, which are one of the best things about the whole Fiesta. A good session of wild dancing with one of them will leave you feeling as good as new.

Then there are other brass bands who have been contracted by the Town Hall to enliven the streets of the town day and night. They play a similar-type of music, but without the same spontaneous sparkle even though the quality may be a little better. The best of them by far is a band called Jarauta 69, who usually gather every night at 1:00 a.m. in Descalzos street in front of the bar “Lambroa” where they create a great atmosphere where an impromptu dance gets off at about one in the morning. After that they make every day a different parade through the streets of the old part of the city. 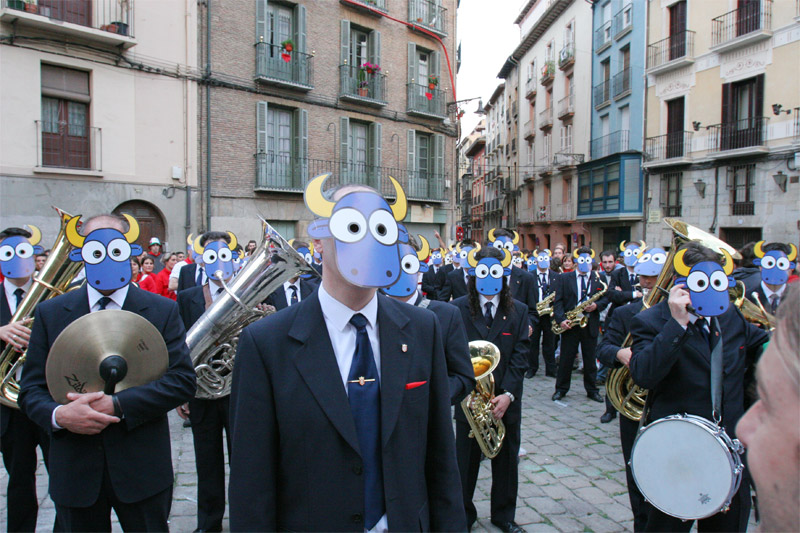 The Pamplona Brass Band taking part in the riau-riau during Sanfermin fiestas, and also in the daily morning Dianas, the procession of the 7th and the bullfights. Before the formation of The Pamplonesa City Hall official band, there were three military bands that had the task of creating the musical “parade” in Pamplona. These were the Regimiento Almansa noº18, Regimiento de América noº.14 and the Regimiento Constitución noº29. In 1919, Silvanio Cervantes, Manuel Zugarrondo and Vicente Sádaba proposed the idea to the City Hall of creating a band made up of a mixture of military musicians and other civilian musicians from the city. The City hall accepted the proposal and let a room to them at the Music Academy. However, very soon there were some problems about who would be in charge of the band and the City Hall withdrew the premises. The musicians went with their instruments to the Paseo de Sarasate Avenue in protest and soon they were given new premises at the school in Compañia Street.

On 24th of September, 1919, the “Pamplonesa” band was formed with Vicente Sádaba as first president, Manuel Zagarrondo as vice-president and Silvanio Cervantes as conductor. There were a total of 37 musicians in the band and its official name was The Pamplona Music Band. The first performance took place on the 11th of October when the band marched through the streets playing a pasadoble and a jota. The band was first contracted by The City Hall for Sanfermin fiestas in 1920. They took part in all the events organized in the street; the txupinazo opening rocket, the Riau-Riau on the 6th, the procession on the 7th and the early morning Dianas …they even played some afternoons in the La Taconera park at The Bosquecillo.

The band tends to gather an assorted collection of people behind it. Some of the crowd are made up of early morning risers, mothers with young children and seniour citizens usually. At the same time there is a large crowd of the late night revellers who are still on a high and perhaps waiting for the bull-running to begin at 8 o´clock. It´s worth having a look a the scene at least once. 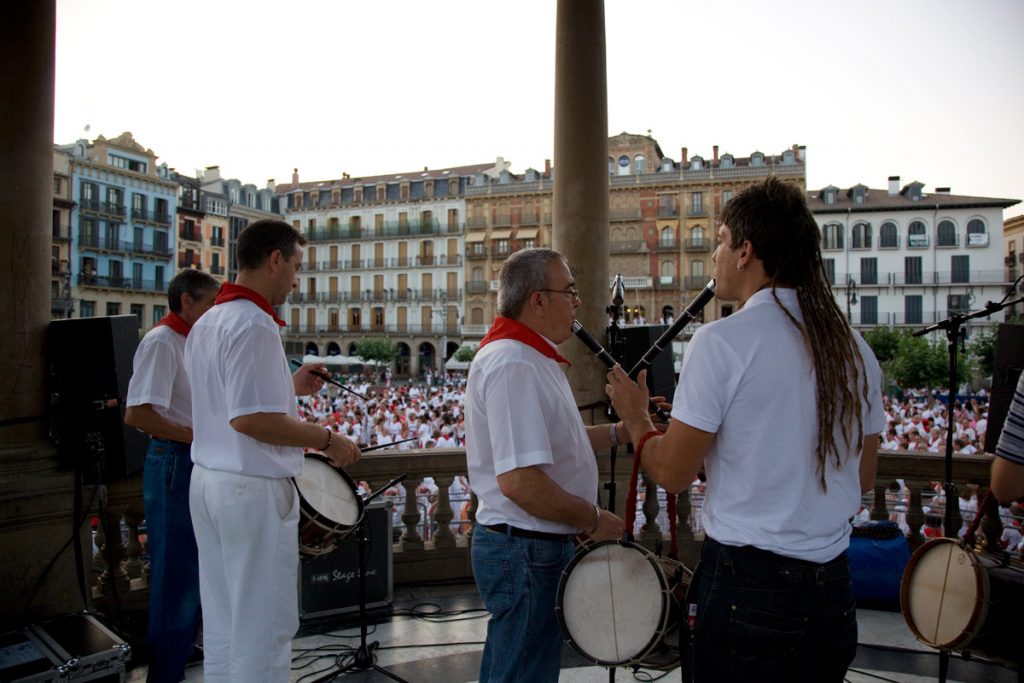 But there are more things than just bugles and drums to be heard during these days. Perhaps the most characteristic instrument is the Basque “Gaita”. Here is the authentic sound of Sanfermin, the music which makes the Giants dance, the music which rings out at decisive moments in the bull-fight, the music which sets off the “era” dance in the main square at 9.00 in the evening. This is a kind of bagpipe but without the bag of air and its traditional sound is enough to lift off the traditional beret from the head of the locals.

This entourage is known as the “Comparsa” and it can be seen at various times of the day parading in the streets, surrounded by children, parents, grandparents and the crowd in general, all dancing to the sound of the “gaita (dulzaina)” and the “ttun-ttun”. A group of “ttunttuneros” accompanies the darkest of all the queens, maintaining the presence in the “comparsa” of the oldest of its instruments. The giants usually dance: waltzes, polkas and jotas. From their height of four metres, it’s quite a sight to see. 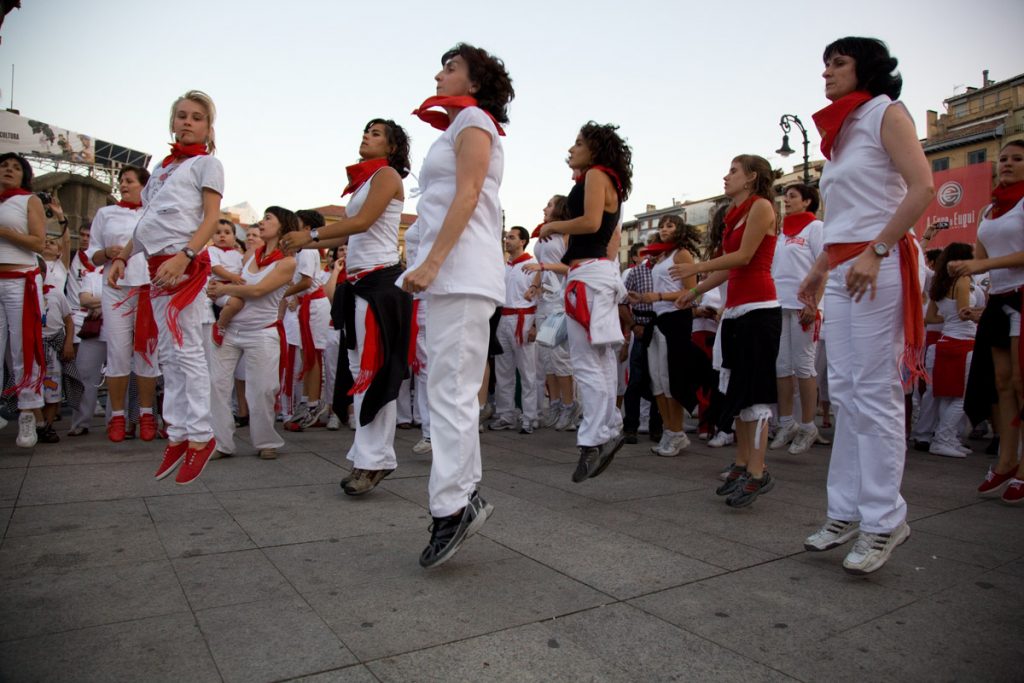 The Dance of the “Era”

This traditional dance takes place each evening during fiestas at 21.00 in the main square of the Plaza del Castillo in the center of Pamplona. It is danced to the tune of “la Era”

This is a very popular and traditional event which attracts a large crowd and it can be fun for all those who wish to take part. The dancers welcome anyone and everyone as the dance is simple and it is just a question of copying what you see the other dancers doing. Better to go in pairs as the dance in itself is made for pairs. There is no limit to the number of dancers taking part. The dancers dance around the kiosk or bandstand located in the main square and the music comes from the flute players who play the different melodies.

The dance of the” Era” is made up of six distinct elements, each one with its own music melody and with its own steps that include choreography made up of the “la cadena”, la “jota vieja”, vals, fandango, boleras and the la corrida. When the first notes are struck up by the flute players, one of the pairs of dancers offers a scarf to the other pair, and as the scarves are held in a “chain”, all the dantzaris or dancers begin to spin round and round. The couple directing the dance then stop and lift the scarf over their heads and the rest of the dancers must pass under it.

Once this phase is completed, the la Jota begins-and this is an even livelier dance than the previous one. Then come the el Vals, el Fandango and las Boleras. The dance comes to a close with a Correcalles or general spreading out of all the dancers.

The Jazzfermin cycle has now become a stable tradition as it has been celebrated annually ever since 1996. A thoughtful program with a distinct style in comparison with the wild partying contributes to creating a special bubble of space within the Sanfermin atmosphere. As each year passes this cycle attracts more and more followers to the quietness of the small square in Los Burgos (New Place from 2010) from Monday through Thursday, avoiding the weekend crush.