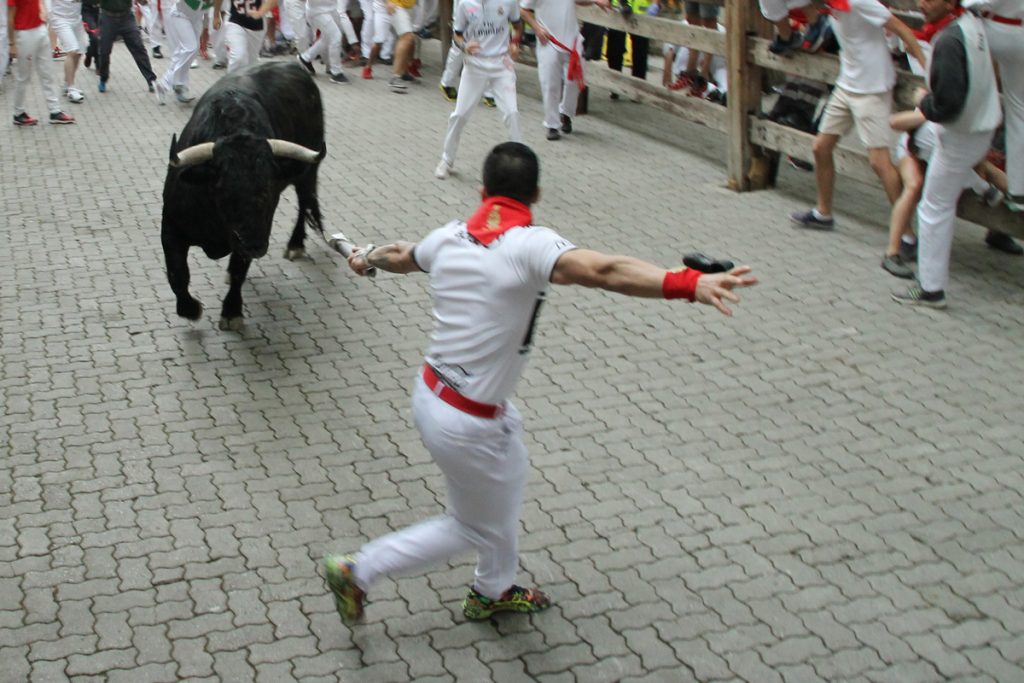 To run the course in a “correct manner” is not as easy as it might seem. However, outlined below are some points to help you to take part in the event and avoid problems with the bulls and with the norms of the event

When you are running keep a constant eye on the distance between you and the bulls. They´ll be up your ass before you know it. At the same time, Be aware of the runners in front of you, particularily fallen runners who can easily trip you up. 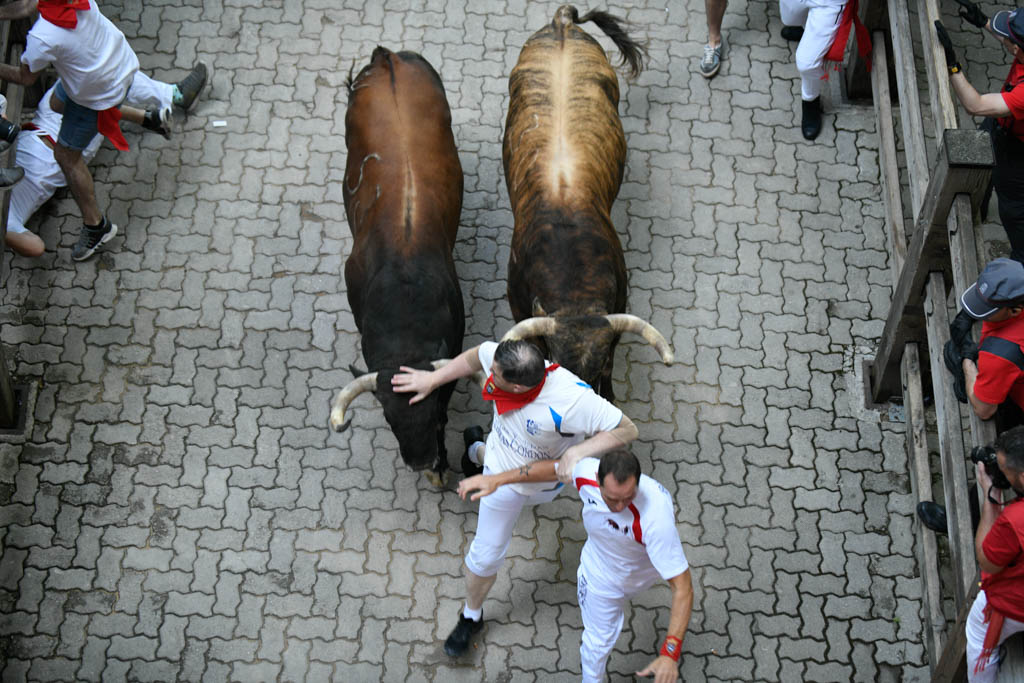 Be aware of what’s going on around you

Look for the place where you plan to pull out of the run. It´s all quite hectic and complicated in a very short space of time.

This is highly dangerous. In theory, the bulls don´t want to tangle with anyone. They just want to get out of that tight enclosed route as quick as possible. If they are not distracted by anything, they will follow a straight path all the way to their bullpen. But if you distract one of them, and it gets separated from the group, things could get deadly serious and come to a bad end. Bad for you, maybe, but also bad for the other runners.

Making any stupid attempt to catch the bull’s attention tends to rouse the anger of the other runners so that, even if the bull doesn´t take any notice of you, it´s likely that the other runners will, and you could end up being a punching bag for the irate runners.

Should you trip up on the run-Stay down

A trip-up is more than likely to happen – for a number of reasons. As we have said, the bulls don´t particularly want to tangle with anyone. If a bull sees a fallen lump in front of him, he´s likely to step on it and keep going. And his other five mates will do the same and that´s that. You´ll probably come out with a few heavy bruises, but nothing more serious than that. But, if you try to get up or move straight away, this could cause the bull to take notice of you. Even worse, maybe you get up right in the path of the running bull, and he could go through you as clean as a knife cuts thorough butter. This, in fact, is what happened to the last fatality in the 1995 run.

So, should you have the misfortune to fall or trip up…

Stay down hugging the ground without moving except to cover your head with your hands. The people will advice you. When the stampede has passed, someone will give up a tap on the shoulder to let you know you can get up in safety.

Don’t try to run behind the bulls

A lot of people seem to want to keep running even after the bulls have passed them out. The only thing that can serve, is to possibly distract a bull who might notice any movement behind him and create the risk of his turning round. 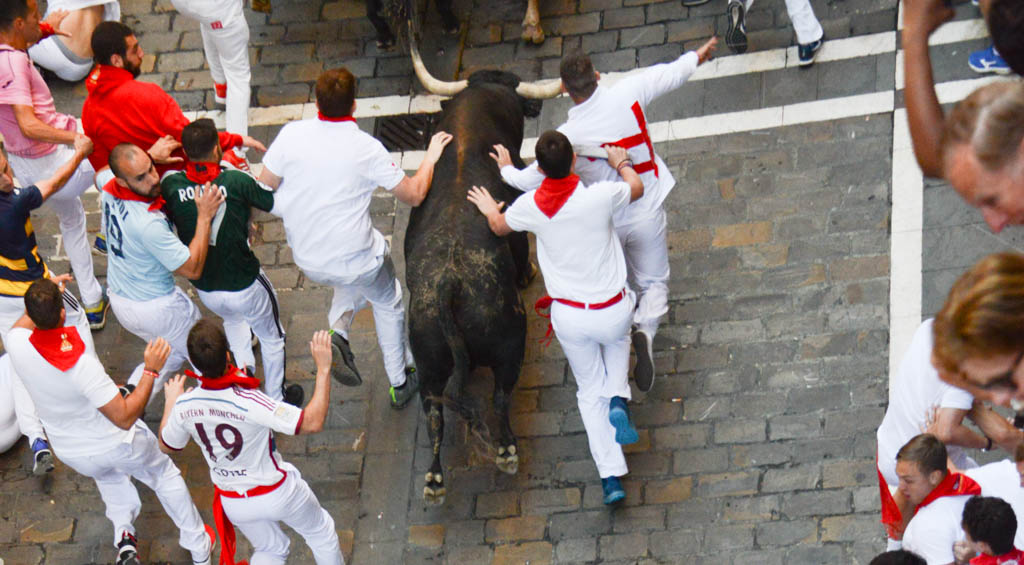 Don’t attempt to touch the bulls

A lot of people seem to want to touch the bulls for some strange reason. They shouldn´t be touched even in the slightest way, as there is another potential risk in distracting their attention.

Don’t stand still during the run

When everyone starts running, you must run too. If not, you could cause others to fall or trip up against you. If you want to be a spectator, stay on the other side of the fence. The only reason you cross over that fence is to run.

Fan out when you run into the ring

Spread out when you get through the entrance to the ring and head for the barriers round the edge of the ring. In this way you will keep the space clear for the drovers to do their work of sidling the bulls into the pen. Should you find yourself in the middle of the ring, you are in the path of the bulls who can move much faster than you and you are in a totally defenceless situation, as well as being a disturbance to the drovers in their work.

Don’t disturb the drovers and herders

These people are responsible for getting the bulls into the bullpen as quickly as possible. The quicker they do it, the less danger there is. And it´s also worth nothing that the herders tend to carry long thin rods and a swipe from one of those could hurt more than the bruise from a bull stepping on you.

Don’t carry anything on you when you run

If you can´t find a safe place to leave down your pack, video camera or whatever, then just forget about the idea of doing the run. But, don’t worry, you can watch the running of the bulls from a balcony.

If you want to know more about Norms and Regulations, click here.

And here we leave you the tips to run the running of a regular American runner, Denis Clancey.


Warning: Parameter 2 to qtranxf_excludeUntranslatedPostComments() expected to be a reference, value given in /homepages/39/d808052004/htdocs/sanfermin.com/wp-includes/class-wp-hook.php on line 303

One thought on “Advice on how to run with the bulls”