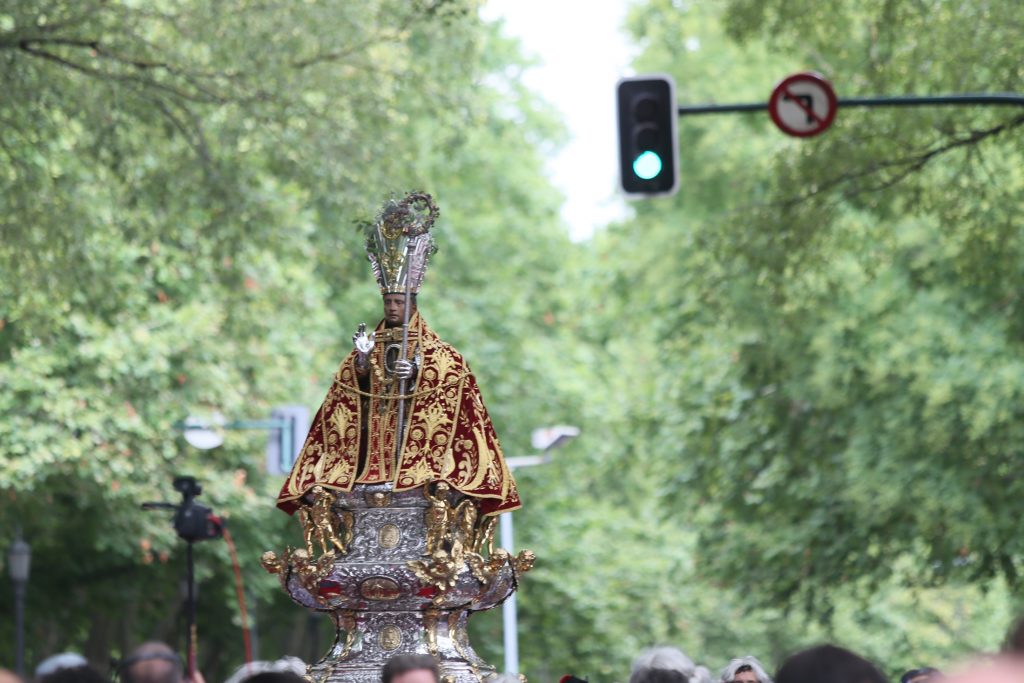 The 7th of July, at 10.00 am on the day, the procession of Saint Fermin leaves from the church of San Lorenzo. The route is jam-packed with crowds who want to see the image of the saint and the entourage that accompany the figure of the saint

The street is the best place to contemplate the procession, where there is a bit more room available, except perhaps just at the exit door area which is especially popular for viewing the saint as is also the Plaza del Consejo.

Don’t miss it. The city corporation in all their finery, and accompanied by all kinds of music bands, including the official brass-band – The Pamplonesa – as well as the Giants, the official entourage etc. all set off to head for the Cathedral to collect the “cabildo” or official assemblage of ecclesiastical representatives.

Then, once united, all head off for the church of San Lorenzo, where the remains of San Fermin are kept, to carry out the figure of San Fermin. The figure is paraded through the street with all possible pomp and ceremony during some two hours and is then brought back to the church. The city corporation once more head back to the cathedral to separate from the ecclesiastical party and return to the Town Hall. Thus ends the procession for another year.

The most interesting thing about the procession is the pomp and ceremony which accompanies it in the different small acts along the way. There are homages paid to the saint and often impromptu songs are directed at the figure of the saint by people along the route. Perhaps the most moving moment is the entrance to the Cathedral (the momenticos).

This is a good time to get the camera out. There’s no denying that with all the finery, and ancient costumes on show, the bright-coloured spectacle is an open invitation to shot a good photo.There is also time and space to enjoy the parade without too much hassle from crowds. As the parade is long the route can be lined without creating dense crowds at any one spot. The best place to see everything is from the street and there’s no need to look for a balcony. 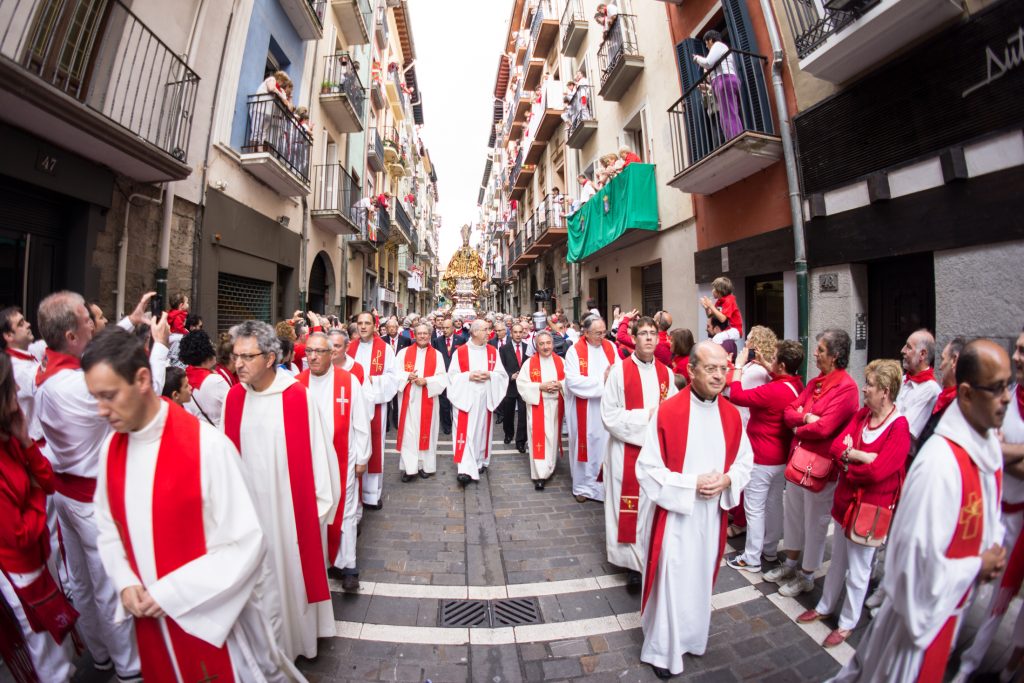 It is impossible to get to all the important moments of the procession in the same year. The “Momentico” is one of those moments outside the Cathedral. But there are other moments which have become special too over the years, for their singularity or importance.
-One curious act that is hardly known by the general public is the moment when the figure of the saint is taken down from the alter and put on the pedestal to be carried out. Three people are needed to unblock the podium from the altar of the side chapel where the saint is kept in the church and two rails are placed on the floor to drag the saint and the podium to its position on the pedestal to be taken out for the procession.

-At exactly eleven forty-five, just before the figure of San Fermin is brought back to the chapel in the church of San Lorenzo for the religious celebration, Mari Cruz Corral here sings a traditional “Jota” song to the figure of the saint. Mari Cruz has been singing this “jota” each year for the past twenty-five years, during this procession of the 7th of July. For the past three years she has sung from a balcony at no. 54 in the Calle Mayor Street.

Itinerary: the route of the San Fermin´s procession

10.00 Town Hall: the city corporation sets off from the Town Hall to meet up with the ecclesiastical group who are awaiting them at the Cathedral.
10.30 San Lorenzo: the procession leaves the church bearing the image of the saint.
10.35 Intersection of San Anton and Taconera street: as the image of the saint passes by, the “Canta et Yanta” Group sing a “jota” song entitled “Quieren todos cantar” (Everyone wants to sing).
10.45 The procession enters San Lorenzo street where a “jota” is sung to the saint from a balcony.
10.55 Consejo Square, where a choral group- Santiago de la Chantrea – traditionally sing a “jota” – “Al Glorioso San Fermin”- to the saint.
11.15 San Saturnino: a halt is made at the Well of San Cernin: two children deposit roses on the pedestral of the saint. The pipe players play the Agur Jaunak.
11.20 A typical jota is interpreted by the Amigos del Arte at the beginning of the Main Street.
11.40 Main Street: a club called the Napardi traditionally sing a “Jota” from a balcony.
11.50 San Lorenzo: the figure of the saint is returned to its place in the church and mass is heard.
13.10 Main Street: the ecclessiasticals and the city corporation head back towards the Cathedral.
14.15 The “atrio” takes place at the Catherdral. Here, the Giants dance to the sound of the “Gaita” and the “Txistu” as the bells of the Cathedral ring out. This is known as the “Momentico”.
14.25 The Giants dance once again in front of the Town Hall. 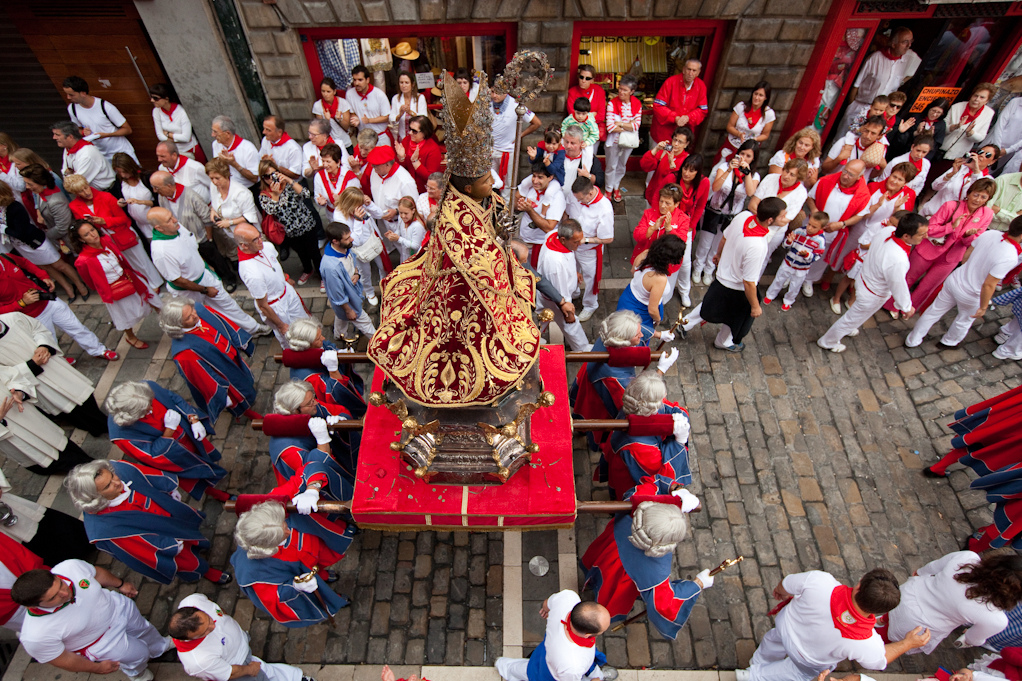 Cortege of Giants and Attendants
The Cross of San Lorenzo and Archiepiscopal Cross
Brotherhood of the Passion, The Marian Congregation
The farmers and the carpenters guild
Municipal flute, bugle and tambourine players, the city flag of Pamplona
Court of San Fermin
Image of the Saint
Archbishop
Macebearer
Town Council (Mayor and Councilors)
Municipal Police (Escort)
La Pamplonesa (Municipal brass band)
Two members from every one of the “Peñas” flank the image of the saint on each side.

Until 1987 the dance group from the Town Hall used to participate in the procession and offer a dance on the completion of this traditional event. The group was dissolved when a dispute arose about the bearing of the “Ikurriña” -the Basque flag- something which the dance members felt was indispensable. In 1997 they renewed their participation again after coming to an agreement on the issue with the Town Hall, but they do not carry the Basque flag, only the city councils.