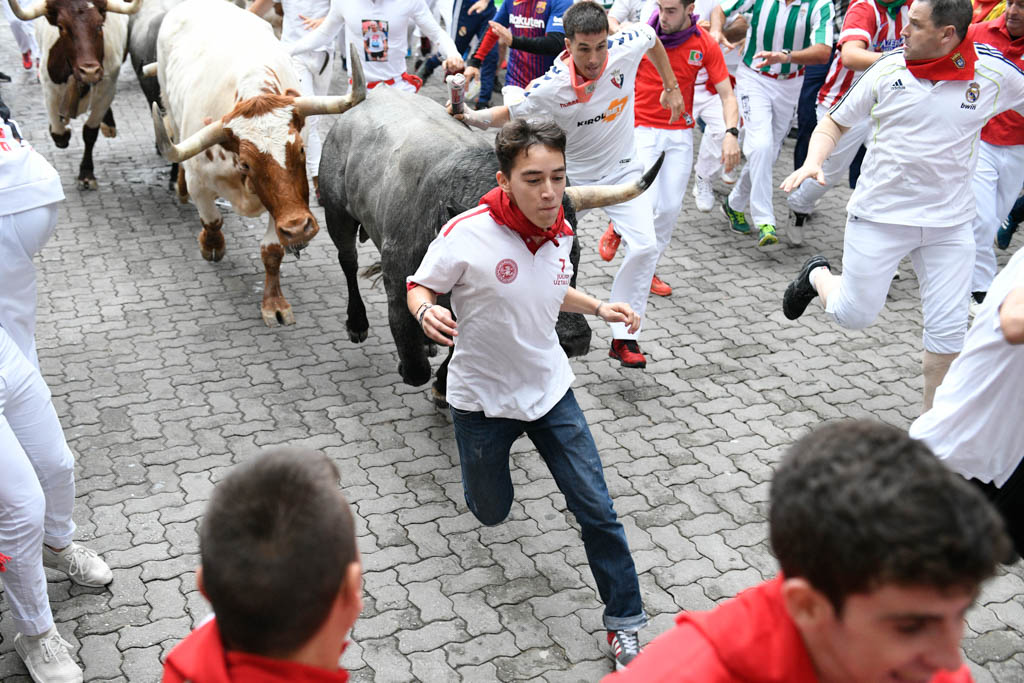 The Running of the Bulls is a race with fighting bulls which is held each morning in Pamplona during fiestas, between the 7th and the 14th of July

The Running of the Bulls is a free-of-charge bullrunning over an 875-meter course in front of six fighting bulls accompanied by six tamed bell-oxen that lead the bulls through the narrow streets of Pamplona and up as far as the bullring. This event takes place each morning during the fiestas of Sanfermin, between the 7th and the 14th of July, at 8 o’clock in the morning. Ordinarily, the run should just take between 2 to 3 minutes to complete, unless something adverse occurs.

How did this tradition first begin?

Apparently, the butchers were responsible in olden times for bringing in the bulls from the ranches and the young apprentice butchers began to accompany the bull minders – the pastores – when these would shepherd the bulls up to the bullring. Often they would run ahead of the bulls to entice them forward. With the passing of time, the event became popular with the general public and the men began to run in front of the bulls instead of remaining behind the animals as the bull minders always do.

How can the public take part?

There is no need to sign up or join a list. Participation is completely free and any person who is 18 years of age or over may take part. However, there are a series of norms and rules that need to be respected if you want to avoid fines or problems with the local authorities. The local police tend to be strict and firm about any kind of misbehavior and are particularly stringent in ensuring that no drunk or intoxicated runners are admitted onto the course of the run.

The stretch of the course

The bullrunning course crosses several narrow streets of the old quarter of Pamplona. It starts from the slope of Santo Domingo street and finishes inside the arena in the bullring. The total distance covered is 875 meters. Although this is a relatively short distance, it is impossible for a runner to cover the whole course. Several factors make it so; the distance, the presence of so many other runners and, above all, the enormous speed of the bulls. Should you find yourself in Pamplona in those days and at that particular time, don’t worry about coming across any dangerous fighting bulls around the next corner. The whole length of the course is completely fenced in which makes it almost impossible for any bulls to escape from the course. 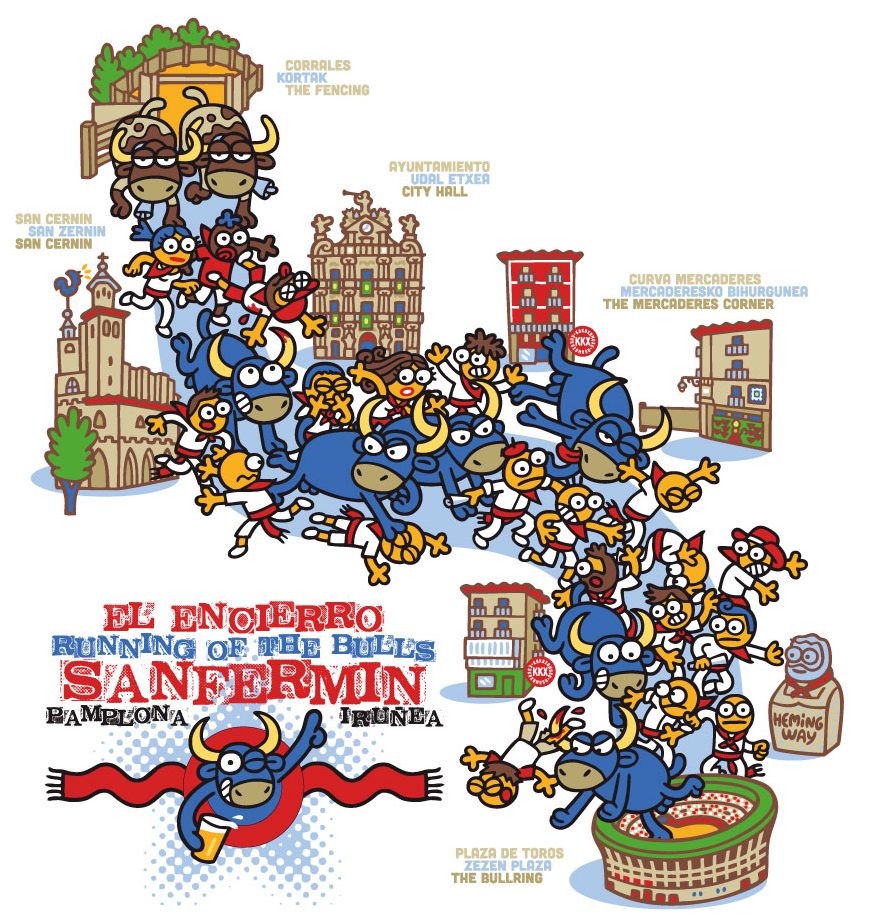 in the early hours of the morning the double -fencing begins to be put in place along the streets of the course. The streets are now hosed down with water in order to remove the litter and debris left over from the previous night’s unruly partying. At the same time, the local police help move all personnel from these streets. Nobody may remain in the space between the two lines of fencing except health personnel and accredited press people. When the last wooden gate is closed in the fencing, the streets have now become a relatively narrow passageway without an exit or an entrance. The only way for the runners to gain access to the course now is to make their way to a gateway located beside City Hall which is open from between 6.30 a.m. and 7.30 a.m. Spectators may also start looking for a position behind the fencing to watch the bullrunning event from there. But they must always stay behind the second line of fencing.

Just before the start of the event, the runners who have chosen to make their run at the first stretch on the slope of Santo Domingo, chant a homily to the image of San Fermín, patron of the fiestas, a figure located in a niche on the wall. The words go “A San Fermín pedimos, por ser nuestro patrón, nos guíe en el encierro dándonos su bendición.” (‘We beseech San Fermin to guide us in this run and to give us his blessing’). The piece is also sung in Basque. At exactly 8.00 a.m. a rocket is set off to announce the opening of the bullpens and the start of the bullrun.

Pay attention to the rockets which are set off at the time of the Running of the Bulls. It is in this manner that the organizers communicate with the runners and the general public. The first rocket to go off indicates that the “Encierro” – the Running of the bulls – has commenced and that the bulls have been released from the pens. The second rocket that is heard indicates that all six fighting bulls have left the pens and are now on the streets. The third rocket is set off when the bulls have entered the pens inside the bullring. The fourth rocket indicates that the fencing may now be safely opened and the streets along the length of the course can once again be used by the general public and the fiesta can continue with its holiday mood. 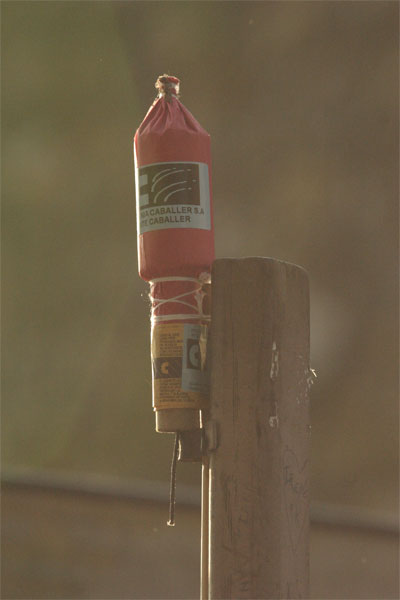 Before deciding to take part in the running, find out all you can about the Running of the Bulls and about how to run. If you still want to take part, choose a particular stretch of the course and listen to advice from experienced runners. Basically, it is a question of starting to run slowly at first and when the bulls draw close behind, run with all your might as far as you can. The good runners like to get close in front of the horns and maintain their position as long as they can. You can decide how close you want to be to the bulls (the closer you are, the bigger the risk) and when the bulls begin to outrun you, pull off to one side and let them pass by. Try not to block or hinder other runners as you pull aside (hug the wall or fencing or squeeze through the fencing if you can).

Running with the bulls has its risks. There is an average figure of about 2, 000 people participating in each Running of the Bulls. The bulls could gore you or knock you over or trample you with their hooves. Usually, there are some injuries, big or small, depending on many factors. Occasionally, there are serious gorings and injuries, especially when a bull gets separated from the pack or when occurs a pil-up. It is rare to have a death occur, but there have been several cases over these past thirty years. So, the event is no laughing matter. If you are a foreigner and receive any kind of injury or wound during the running of the bulls you will receive immediate and expert treatment and appropiate hospital facilities should it be necessary. However, later on, you will be given a bill or a demand for payment so that your insurance company can cover all the costs.

And if you don’t run

If you don’t feel like risking your life, but just fancy watching the event, you can do so in several ways; by watching from one of the many balconies that line the route, from inside the bullring and here, immediately after the bullrunning, some young heifers are released in the arena to be played with by the runners and public alike. Or you could just watch it on TV, should you be in your hotel or apartment, perhaps nursing a hangover. And of course, the TV is the only option if you cannot make it to Pamplona this year.