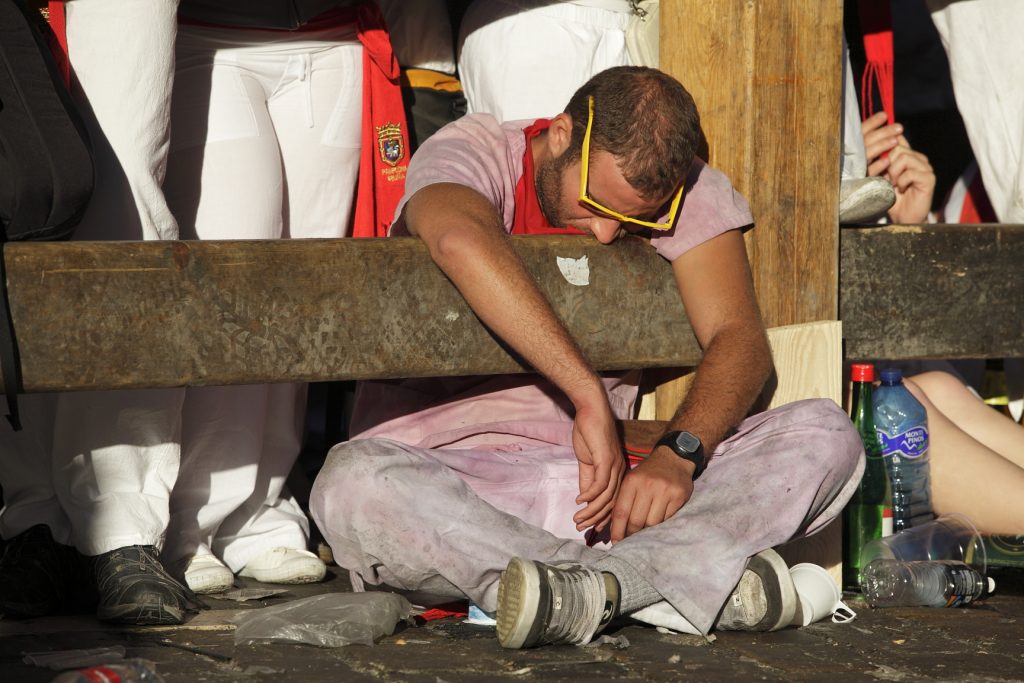 It is not really normal to sleep out in the open air in the parks of Pamplona in Sanfermin. It is much better to try to get a hotel, apartment or camping site. It is true that you can find people who are totally played out from the partying and who take a rest and nap at whatever spot they can find before heading home to their beds

What you sleep through is all that you haven’t lived and during the fiestas of Sanfermin you shouldn’t miss a scrap of all that is going on. However, the moment comes when sheer tiredness brings down the best of us. The possibilities of sleeping in off in Sanfermin are varied. If money is no object, a good hotel would be for you. But if you haven’t booked well in advance, forget it. Many people simply sleep it off in the parks around Pamplona. And between these two extremes there are endless possibilities of boarding-houses, private houses, campings, etc. For sure, you will find something to suit you. Sanfermin Booking (Powered by sanfermin by locals & Sanfermin.com) offers various packets that could be of interest as they are varied and open to different kinds of travelers. If you can book hotel rooms to Pamplona you can visit here.

Prices for accomodation go up for the days of the Fiesta. But if money is no big problem, the best place is always a good hotel (shop.sanfermin.com).

Our friends of Closer to event can help you with your acomodation.

If you have nowhere to sleep, or if the money is short, or if you are all spent out, you can always sleep out (From Sanfermin.com Travel tips guide) It is also quite customary to rent out apartments or rooms in Sanfermin. Sanfermin Booking (Powered by sanfermin by locals & Sanfermin.com)  offers various packets that could be of interest as they are varied and open to different kinds of travelers. You can book the balconies to the running of the bulls too.

If you just don’t sleep or just want to crash out for a few hours on the grass, remember you can do so but it is not possible to set up tents in the city parks or anywhere else that is not a proper camping site. However, you could crash out with a sleeping bag in the public parks. Pamplona is quite well served with parks, but remember that it could get cold at night (From around 14 to 22 degrees centigrade), and that it could rain. Also be aware of early morning city hall cleaners who might be hosing down the parks from early morning and give you a disruptive awakening. If you can book hotel rooms or flights to Pamplona you can visit the official campings de navarra website.

There is no real danger of robbery or whatever

Lot of people will be doing it and maybe it’s a good idea to crash out where there are others doing the same thing close by. Perhaps the best place, as it is the biggest, is the park at the Vuelta del Castillo. Not far from where the action is, yet reasonably quiet. At the old walls, The Redín, there is some green space. But be careful, you are sleeping on the edge of the city walls where there is a thirty-foot drop should you roll over too far. Perhaps better if you go through the old city gates (Portal de Francia) and find a grassy spot under the walls. 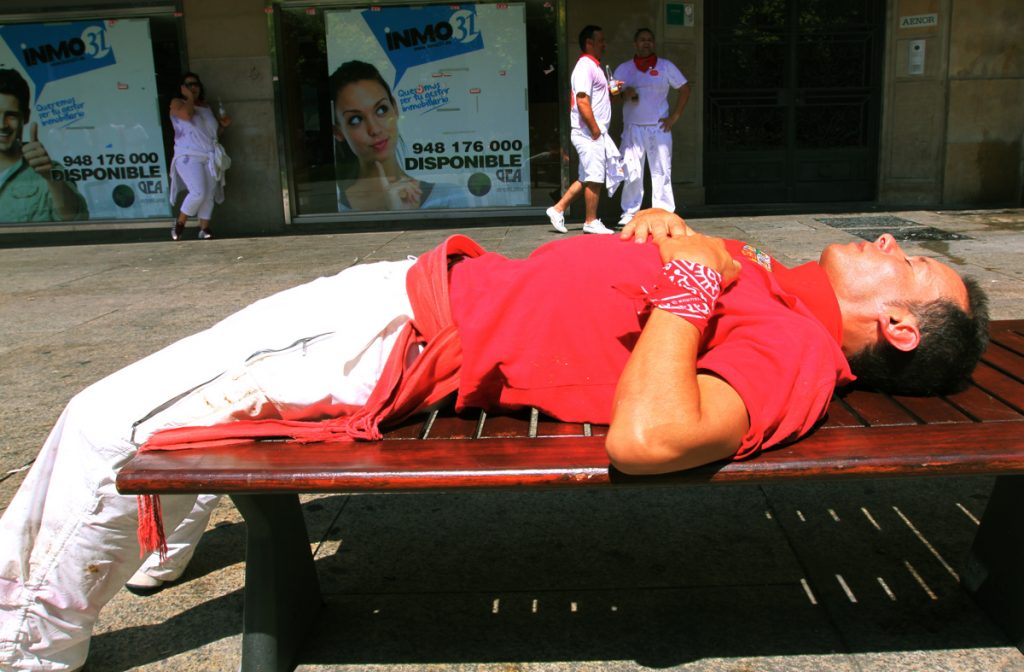 There is another quiet park at the Media Luna, although a bit short on grass. There are several other similiar places around the city [map] and the further away from the centre, the quieter it will be. There is another park not very far away from the city centre, between San Juan / Donibane and Ermitagaña neighborhoods, just beside the Iruña Park Hotel, which is very quite: it is called la Vaguada. In any case, a sleeping-bag is recommended. The nights will always get a good deal cooler in Pamplona even on very hot days. An underblanket also helps. Anyway, you have got the idea and this is not the place to give camping lessons to anyone.

If you have to sleep rough, a handy service will be the public showers

There are public baths at Eslava street (948 22 17 38) in the old part where you can have a hot shower/bath. Also at the Antoniutti park a little further out. You can read de Sanfermin Guide. Remember that you can also go to a municipal swimming-pool (Aranzadi) and also be able to have a shower there. Should you have to sleep out, it will be a very good idea to leave your pack or baggage in the Left Luggage (during Sanfermin) at the schools of Plaza de San Francisco(948 21 24 80). 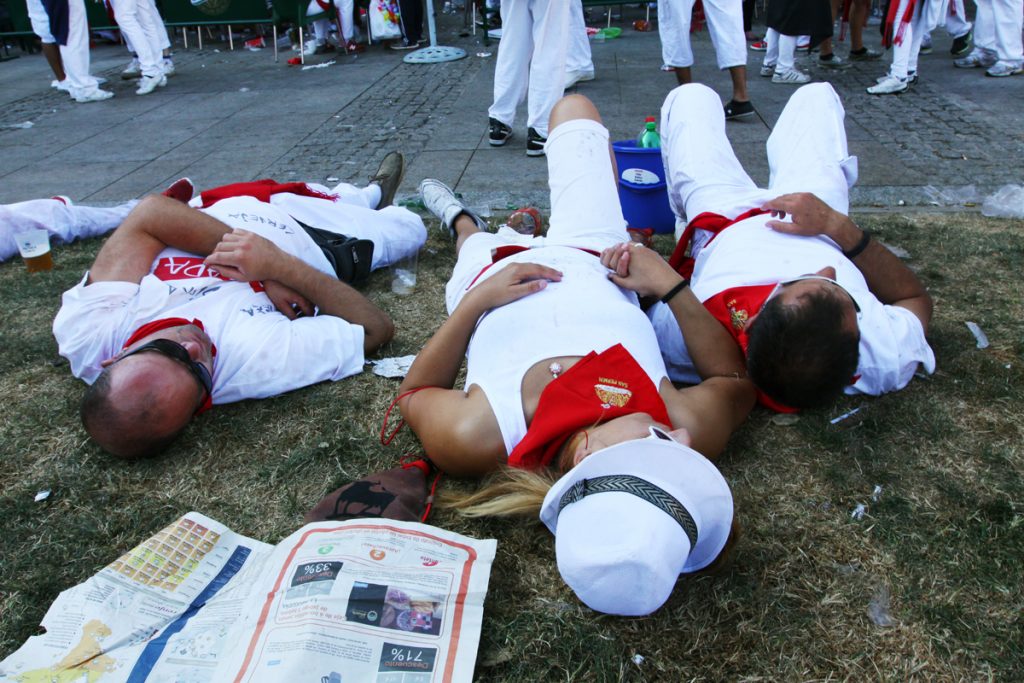