It was not to be. The Riau-Riau event was called off after some incidents which took place this afternoon in City Hall square. For more than half an hour some youths brawled with the local police and even some other spectators as they tried to prevent the initiation of the Riau Riau from taking place. At 5.45 p.m. the police retreated inside the City Hall building and some 25 minutes later the event was officially called off.

According to a statement released by City Hall, one municipal policeman was wounded in his face after a bottle was thrown at him during the fracas. Just as happened the last time an attempt was made to revive the event in 1996, once again the physical confrontation between some members of the public with the authorities meant that the event could not go ahead as planned.

On this occasion, from the very first moments, even before La Pamplonesa, City Hall brass band appeared a noticeable tension filled the air among the large crowd gathered in front of City Hall. Minutes later, at about 5.30 p.m. the first pushing and shoving began to take place at a particular corner of the square and it was here that all the scuffles took place. In spite of the attempt by some young people to help the police to open a passage way for the brass band and councilors, it was all to no avail. The local police decided to withdraw amid the vociferous cries of some people against the authorities with shouts of “UPN Kanpora”. Other members of the public counteracted with cries of “San Fermín, San Fermín”.

Even after the announcement by loudspeaker of the official cancellation of the Riau-Riau event, some scuffling continued between opposing groups of young men, some of these at the very door of City hall. Those in favor of the revival of this traditional Sanfermin event expressed their disappointment among the crowd. But in the end, it wasn’t to be this year either.

More photos from the 6th of July 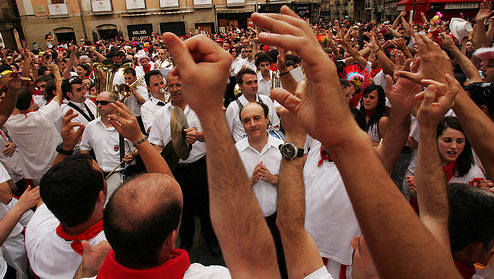 The Sanfermin Round Table Commission had an uncommon and special visitor yesterday to its meeting, the Mayor of Pamplona, Enrique Maya. His visit did not arise by chance for he came to raise the subject of trying to revive the traditional event of the Riau-Riau. The Sanfermin Commission, which is made up of representatives from different social groups and associations, greeted the proposal positively.

The singing and dancing are repeated time and time again and it is interpreted by the city hall brass band, La Pamplonesa with a verbal “Riau-Riau” from the public. The record of the number of times the piece was played was set in 1980 when it was played 181 times in succession. The person who was responsible for this initiative was Ignacio Baleztena and his son relates the original story in the blog blog de Premin de Iruña.

In 1991 the Riau-riau was suspended from the official program after some serious incidents which prevented the city hall councilors from completing the course. In 1972 and in 1980 it had also been imposible to finish the course due to the mass of bodies in front of the procession. But this time, because of the intensity of the incident it was decided to suspend the event. There were attempts to revive the event almost from the beginning, and on other years such as 1996, but without much success.

In 1997 some members of the Peña Mutilzarra made some of the first attempts to recover the popular event without the permission of the councilors or political parties. This initiative was backed by some of the old folk’s associations, under the guidance of Patxi García. Little by little this effort gained support from the public and since 2002, the asociación de jubilados Yoar (Pensioner’s Association) have taken over the organization of this event. In 2006 both the City Hall brass band, La Pamplonesa as well as the Comparsa de Gigantes y Cabezudos(The Troupe of Giants and Big-Heads) joined in the event once again and now the event looks very much as it always had, except for the absence of the city hall councilors.