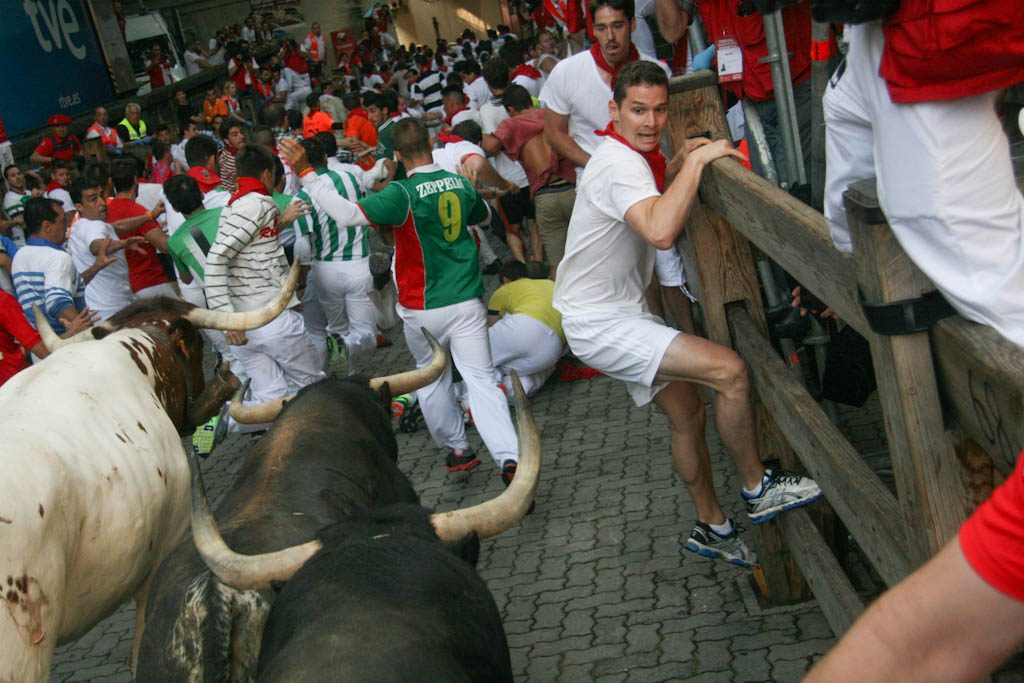 The Pamplona Running of the Bulls is the most famous bullrun of them all. But before taking the decision to run, you should bear in mind several important points

The Pamplona Running of the Bulls is the most famous bullrunning of all. It is one of the classic tests of risk and excitement habitually chosen by thousands of young people from all over the world. For that reason, you can meet two kinds of visitor in July in Pamplona – the ones who are very decided about their participation in the running and who have come half way across the world in order to do just that. Then there are the others who have arrived in Pamplona for the fiestas and now they must make up their mind if they want to take part in the running of the bulls or not, once they are here.

We will outline several points to help those doubters to make up their minds: Should I run in the Sanfermin Running of the Bulls? Here are 9 things you ought to know before taking part in the Encierro.

1) First of all, wise up on what the Running of the Bulls is all about

Before making up your mind, you should get all the information. If you are clear about what it entails and still want to take part, make the proper preparation for it. That way the risk of a mishap will surely lessen greatly. Check out our quick guide to the Running of the Bulls to get a good idea of what it is all about.

2) Ask yourself if you are really prepared

The Running of the Bulls is precisely that – a run. So, make sure you are in good physical condition and that you have the proper footwear and clothes to run in. you should ask yourself that question again just before you enter the course. Even if you have prepared yourself for the event, perhaps on the morning in question you find that you have been out partying all night and you feel played out or just plain drunk. If this is the case, it would be a pretty good idea to give the run a miss and wait for a better day to take part in the event.

Don’t be frightened. The whole stretch of the encierro is only 875 meters in length. Even then, it is only possible to run a part of the course. Nobody runs from start to finish. The normal thing to do is to choose a stretch and, when the bulls get close, start running as fast as you can and as long as you can, before pulling away to one side. You should be aware that as the pack of bulls draw close, you will be surrounded by some expert runners who know what to do in these cases. Try to get close to the horns if you wish, but be ready to pull aside after your “run” without impeding or knocking the other runners. And let those big fighting bulls, with horns as sharp as knives and weighing up to half a ton, pass on by as quickly as possible. 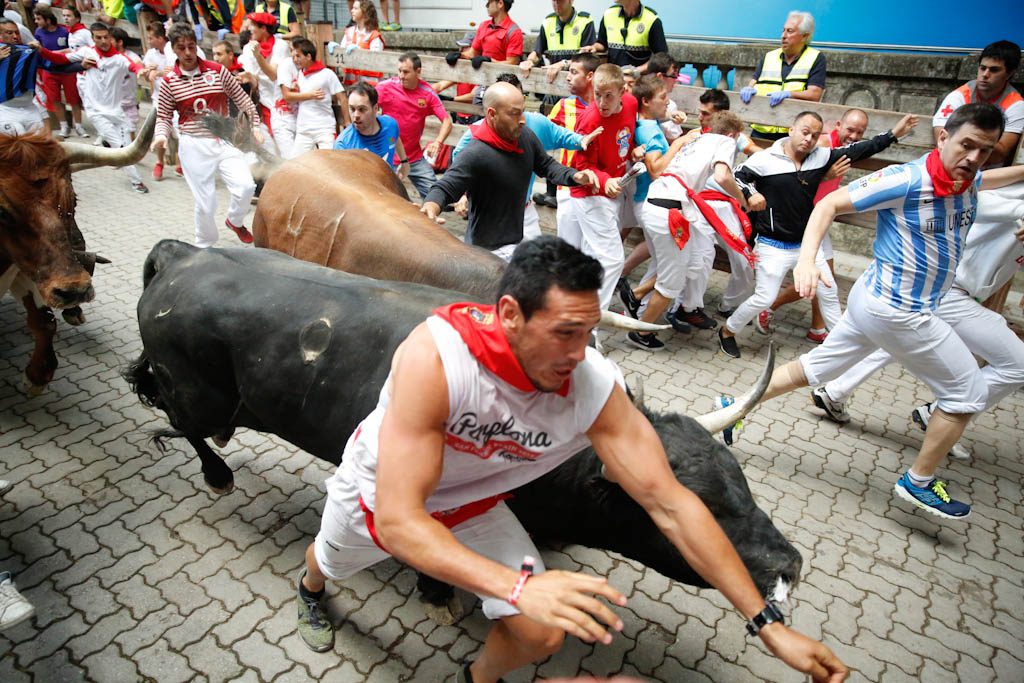 4) Be aware that you are not the only one

Along with the fact that you are running in front of fighting bulls (A fighting bull, for those who don’t already know, is an animals that weighs about 600 kilos and carries a pair of horns that can do a lot of harm) and the danger that that entails, there is the added problem of running in a very crowded setting as hundreds of other runners have the same idea as you. So you need to be very careful not to trip up or be knocked over by other runners. Weekend days are particularly overcrowded as the number of visitors to the Pamplona fiestas more than doubles on those days.

5) If you decide to run, then really run

Before making up your mind to run, make sure you feel sure about it. Don’t be tentative and doubtful. The only people on the course should be runners. If you are found on the stretch without having passed through the proper gate, you will be removed. If you are clearly drunk, you will be removed. Likewise, if you are seen to be carrying a backpack, a camera, or any other element that might be a danger to you or to others, you will be removed. The local police are not in the mood to dillydally at that time of the morning.  By the way, there are no police on the course during the actual running of the bulls, but authority exists in the form of the pastores – or bull-minders -who are there to shepherd the bulls up to the bullring and they wield their rods on aberrant runners as much as on aberrant bulls.

6) The bulls are unpredictable … and so are you

The main danger lies in the six fighting bulls in the sense that, despite the statistical figures, the numbers, the knowledge we have…the bottom line is that we can never be fully sure how the bull is going to behave. For example, although the bulls usually stay in a tight pack as they run, there are times when they separate or get separated, which makes the run much more dangerous for the runners. Sometimes the bull can then turn back and face the runners coming behind. In addition, a runner who is undergoing a rush of adrenalin and who is feeling under intense stress at the same time could mean that the runner will make and take some kind of unpredictable action.

The statistics tell us that the risk factor is low, but that it does exist. There is an average of some 1, 900 runners taking part each day in the encierro. There is a risk of 0’9 of being gored by a bull. There is a higher risk, at 4’14 (but still low) of suffering some bruising or other injury that could entail being admitted to hospital. But more likely some treatment from the Red Cross or similar medics at the event will be sufficient for most of these cases. However, bear in mind that the closer you are to the bulls, the more risk you run.

8) And you could even die

This outcome is rare but possible in the Running of the Bulls. Bear that fact in mind, before you decide you want to run. There have been a total of 16 recorded deaths down the years and 5 of these have occurred since 1980. If we take into account this most recent data, the percentage risk of having a fatality in the bullrun turns out to be 0,017%. This is a low percentage, but it exists.

9) First and only time

In case it helps you to make up your mind about taking part, it should also be remembered that 54% of the runners who take part in any one running of the bulls, do so for the first and last time.