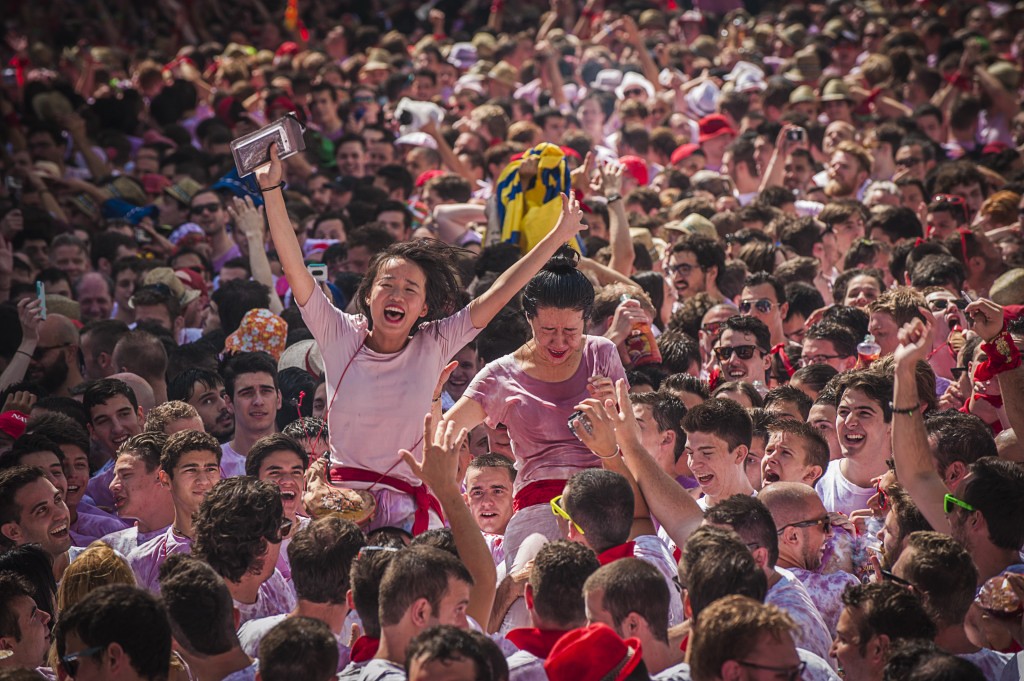 Some things that should be kept in mind if you wish to make the most of the fiestas without missing out on anything.

The Sanfermin fiestas are quite safe because the citizens themselves make them so and the authorities also make an extra effort to ensure that everything is in order. Pamplona is a normal European city that assumes some extra problems during its Sanfermin fiestas which means we have to watch out for pickpockets and suchlike who flourish amid the agglomeration of people. Broken glass on the streets and overcrowding could also create some anormal difficulties.

As the Sanfermin Festival is both nationally and internationally so well-known, it is an obvious attraction for the pickpockets and small-time thieves in general. They are not the violent type – just those typical rather sharp-looking types who are watching out for any opportunity they can find to make a quick snatch – be it wallets, cameras, videos, or whatever. Their presence seems to be increasing year by year and will do most of their work right in among the milling crowds. Although cars are obviously another favourite target.

–Make sure you don´t carry too much money on you, nor any important documents.
–Make a fotocopy of your passport or identity card in case you have any problems.
–Leave everything you can at your hotel or whatever, or in the left-luggage office.

It´s just plain silly to take your camera round with you at nights, unless you are a professional photographer or something. It´s just going to hinder your enjoyment of the night, and maybe you could get it broken, nicked on you (especially if you are well – plastered) or you could just simply lose it.

It is a new fad -it is not a local tradition- begun by some australian visitors who used to meet up together. Nobody knows why, but it seems to have a particular attraction for most of the foreigners who visit us during the festivals. Even if it is quite a wild “tradition”, more and more visitors like to take part in it.

After been drinking for a while (beer, kalimotxo-coke with wine-,liquors…), they climb to the top of the fountain, which is in the middle of the street, and they dive off the top to the waiting arms of the mates below. But, do you think that this people, drunk as they are, will be always able to catch them? Who assure you they will do? Nobody. It is a game and sometimes accidents happen. Normally it is OK, nothing bad occurs, but when it happens? Some people have gone disabled, so it is not a joke. 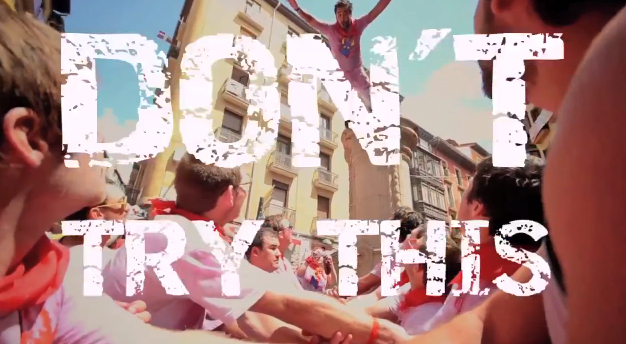 Don´t try this. Don´t jump from the Navarreria Fountain.

For the foreigners, for the guiris, is just something to enjoy with that surely they could not do anywhere else. And for other people, is just a silly way to put their lives in risk.

Pamplona has managed to maintain a good part of its historic ramparts and walls which once surrounded the whole city. Indeed, there is even a museum about its fortifications which gives a complete explanation about this historical-artistic heritage and which is open to the public. The main reference is the historic city citadel, although this area has restricted access in Sanfermin because the nightly fireworks displays are set off from this spot. Bear in mind that, while they are attractive to visit, the walls are very high, particularly in the old quarter of the city overlooking the river Arga, and these could be a source of falls or slips for careless visitors.

At the Redín ramparts (where the tavern, el Mesón del Caballo Blanco is located) there is a stretch of high battlements which can be dangerous with a twenty –meter fall below. Although the walls are protected by fencing, it is a spot where visitors should take extra care. From time to time, some careless person, or perhaps an inebriated visitor, tends to fall off the top of the wall. Above all, it is not a place to crash out or fall asleep. Nor even to visit should you be inebriated, particularly in the dark of night. There have been several fatal accidents here for these reasons. 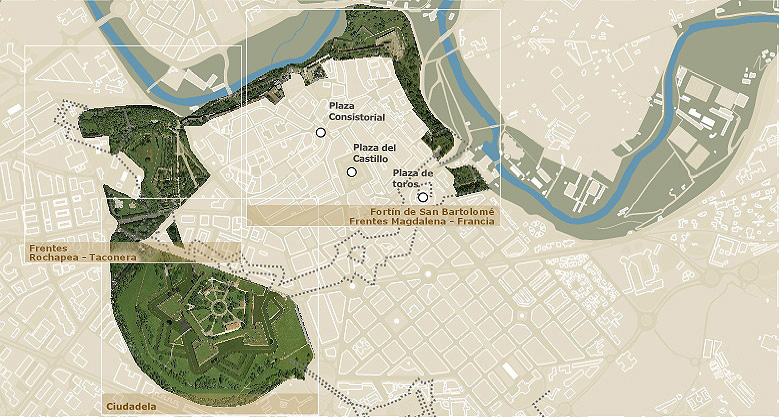 The fortified city of Pamplona, built between the 16th and 18th centuries, is one of the best preserved bastions in the whole of Europe

What would be the sanfermines without the drunkenness of the majority of the people, without the early drinks of the morning, the ones at the midday, the ones during and after the lunch, the sangria of the corrida…?

For sure, our festivals would lose a part of their genuine essence, at least, as we know them nowadays. Everybody has some drinks in sanfermines, is something inevitable. What can we do!!
The very same day whenthe festival begins, the 6th of July, before the rocket is set off, the cuadrillas (groups of friends) meet to have a lunch and start to drink. At 12 o’clock, when the rocket is set off from the Town Hall, thousand and thousand of bottles of champagne are open and the liquid is spread all around; only a small quantity is drunk by the people. From this moment, as some people say, starts the beginning of the end, the drunkenness lasts from the 6th to the 14th.

But this phenomenon of drink without stop, apart from the funny face has another sad one, the results/consequences of drink too much. Drink or, drink a lot as we do in sanfermines, has nothing to do with drink so much that you are not able to enjoy the fiesta; it is quite silly. It will be difficult to control it, surely, but if you want to have a big fun try to avoid these situations. It would be good if you could have an idea of the level of alcohol that can tolerate/endure your body; of course it is difficult to know, but it will be better for you if you don’t want to find yourself in the street, thrown like a black bag.

One helpful antidote can be the delicious food you can find here; it is not the same to drink with the stomach empty or full. If you are a “professional” drinker, you will know that mix different drinks is one of the worst things you can do for the hangover of the next day and for your stomach. Don’t forget that the sanfermines last nine days, so take it easy and have a big fun!

In the old part of town the bedlam is such in the bars and clubs that it is impossible to supply the voracious demand for drinks with glass tumblers. For this reason and for reasons of safety, the bars serve all drinks in plastic tumblers which can be safety dropped or thrown away afterwards.

However, there are always some smartalicks who are drinking from their bottles of whatever and these bottles, when emptied, are all too often, dropped or thrown onto the street. Despite the efforts the municipal street-cleaners, the streets are usually littered with broken glass of all types. The most common ailment treated at the first-aid centres is always for feet which have suffered cuts from broken glass. Better not to wear sandals and any kind of very light footwear. Because even if you are careful about stepping on broken glass it will be difficult to avoid getting stained by the general muck and dirt which is generated by all the night-time revellery..

During the txupinazo thousands of bottles of champagne are uncorked and thrown to the floor, everywhere: so for safety it is better not to wear sandals or similar shoes. 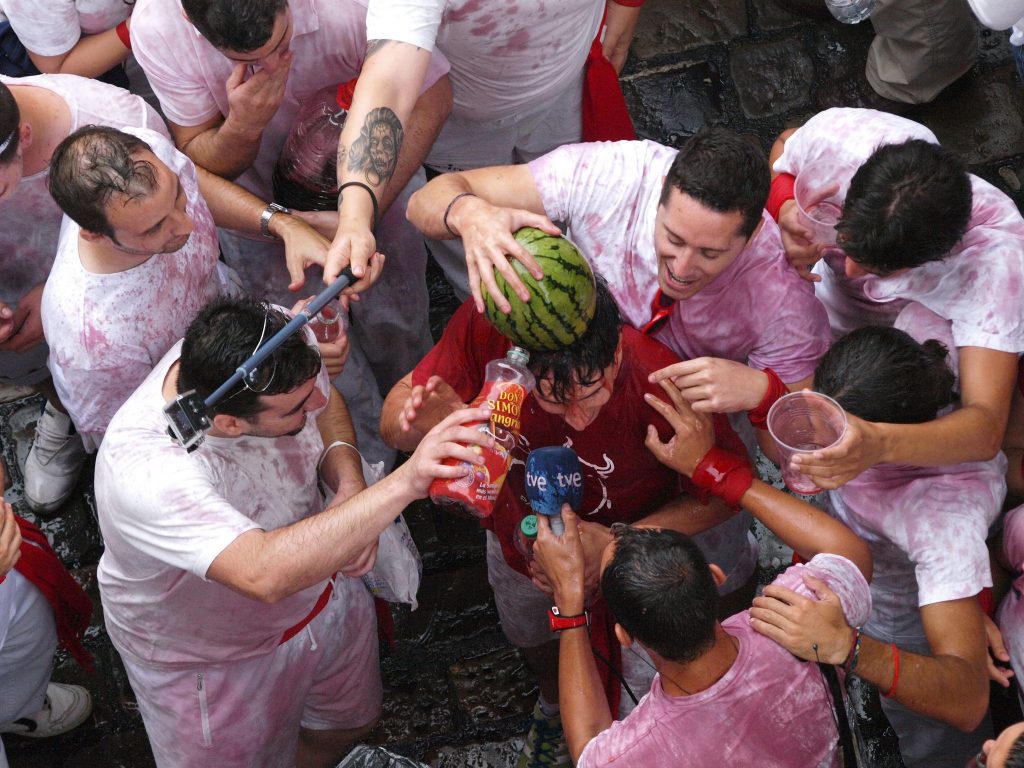 Even St. Fermin can`t protect us from the damned HIV. There is an inependent body – The Anti-aids Commission – who mount a warning campaign during the Fiesta, to help prevent any new breakouts. They have a centre in Pamplona (Tfl. 948 21 22 57) right in the heart of the old town. They give you all the information you need and they can help you out if you feel you want to have a test done. They also hand out clean needles for used ones, for drug addicts. If you don´t have an used needle to exchange, they will sell you a new one. They also hand out preservatives but you can always make a voluntary donation if you want.