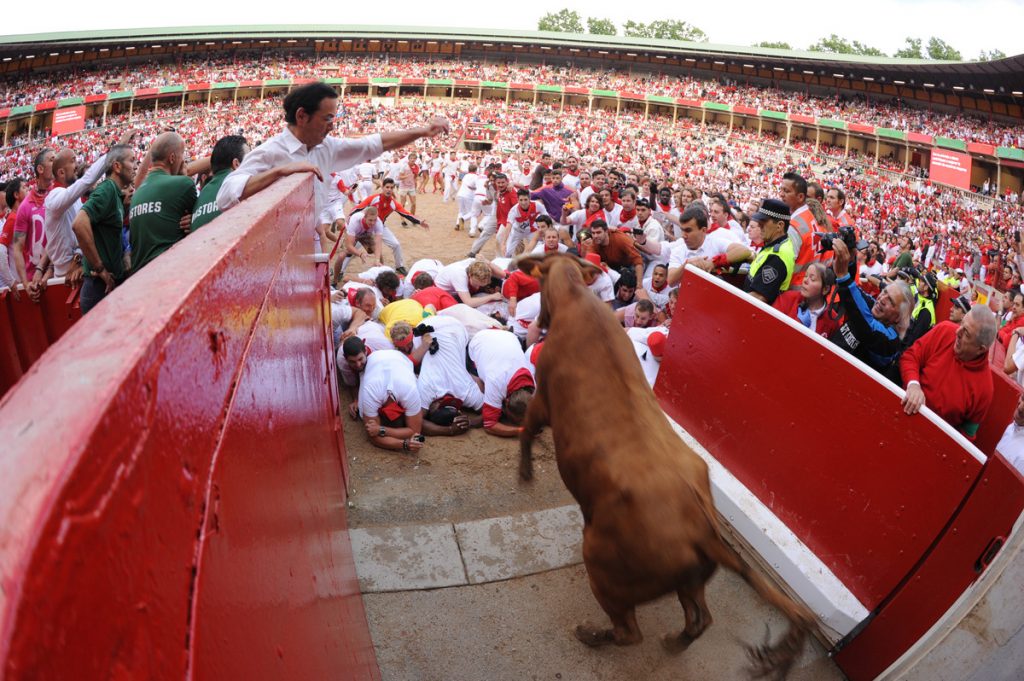 Immediately after the Running of the Bulls, some young heifers are let loose in the arena of the bullring for the diversion of the runners and general public as they try to avoid the charges of these frisky animals. These are much less dangerous than the fighting bulls but they can cause knocks and bruises

When the last bull enters in the bullring and it is led to his pen, is when the heifers appear in the bullring, some small and wild cows, who visit a lot of villages of Navarra during their festivals (where they learn very much).

First of all, only one cow is released and the people start to play with it. Then, some minutes later, other cows appear in the bullring and it becomes more and more difficult for the people to control where the animals are. Comparing to the bulls, the cows are smaller and their horns seem not to be dangerous at all, but they tend to be more intelligent and faster. Most of the times you don’t realize where are they and when you do, it’s late, they catch you.

Some people tend to think that, as the cow’s horns are not very sharp, they can’t hurt you very badly, but this is not totally true; some people are now disabled. It doesn’t occur very often, but you will better respect them and don’t be silly.

Be careful and try to follow a very simple rule: don’t touch the animals and don’t try to attract their attention, it is forbidden, as well as to take their tails or try to shake them. It could be dangerous, not only for you but also for the rest of the runners.

It’s supposed to be nothing but a fun time, so don’t be bad with the cows and enjoy it. The people in the bullring will laugh at you, when the cows will catch you and take off your trousers, and you, you will show your “courage” in front of your mates.