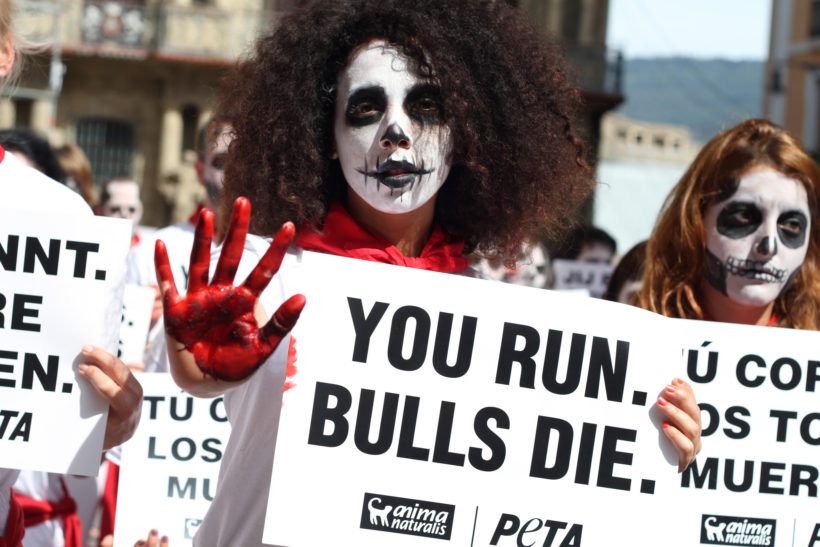 Peta and Anima Naturalis shared a common demonstration in Pamplona against the abuse of animals during Sanfermin fiestas. The expected “High impact” protest did not materialize and their protest format did not vary much from other years, with police intervention and without any violent alterations.

According to what we were told by the spokesperson of Ánima Naturalis, Aída Gascón, this year the slogan “Torture is not Culture” also had an added attachment which was that the participation of the runners in the Sanfermin Running o the bulls made those runners complices in the system which brought bulls to a cruel death.. Around 50 people dressed in Sanfermin clothes stood silently in the city hall square bearing messages in several languages in favor of the animals and criticizing the Running of the Bulls. Behind the group there was a large banner on display and in front there were six members of the group in semi-dress and with paint stains and wearing horns as a symbol of the bulls, to remind the general public of the cruelty inherent in the treatment of the fighting bull. 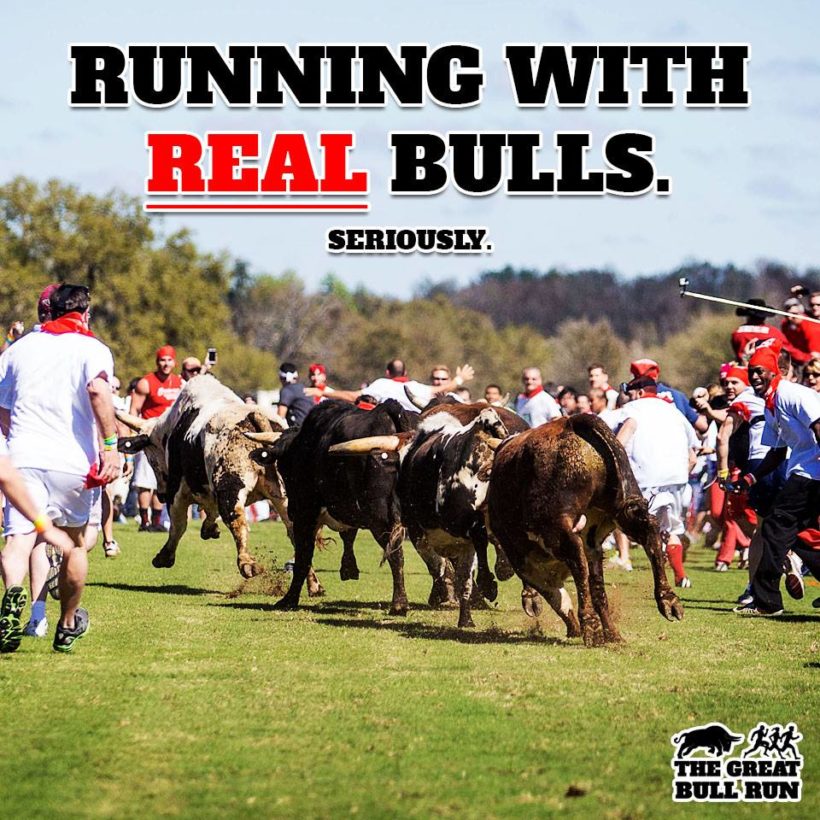 Peta continues its prosecution of mistreatment of animals and especially those events which have bullrunnings anywhere in the world and they are achieving both a certain success and a growing protagonism. According to information from the Courthouse News, this time Peta has filed a suit before the Federal Court of California, in The United States, against the organizers of Great Bull Run and the bull-ranch which provides the bulls for the bullrunnings organized by this private concern. The main argument put forward by Peta is that this event is an attack on the Law of Unfair Competition in California where the “bloodless bullfights are prohibited and moreover they infringe laws 597b and 597m of the State Penal Code”. The suit is being pursued by lawyer Cory Allen Evans from the Evans & Page law firm. On this coming 26th of July, 2014, The Great Bull Run show will arrive to California and this case will have to be resolved before then. The file suit comes to some 12 pages in which some comparisons are made with other events to emphasize the dangers inherent in the event, among these a reference to the Sanfermin Running of the Bulls in Pamplona “where there have been fifteen fatalities recorded over the 103 years(sic) of its history in a similar type of event.” 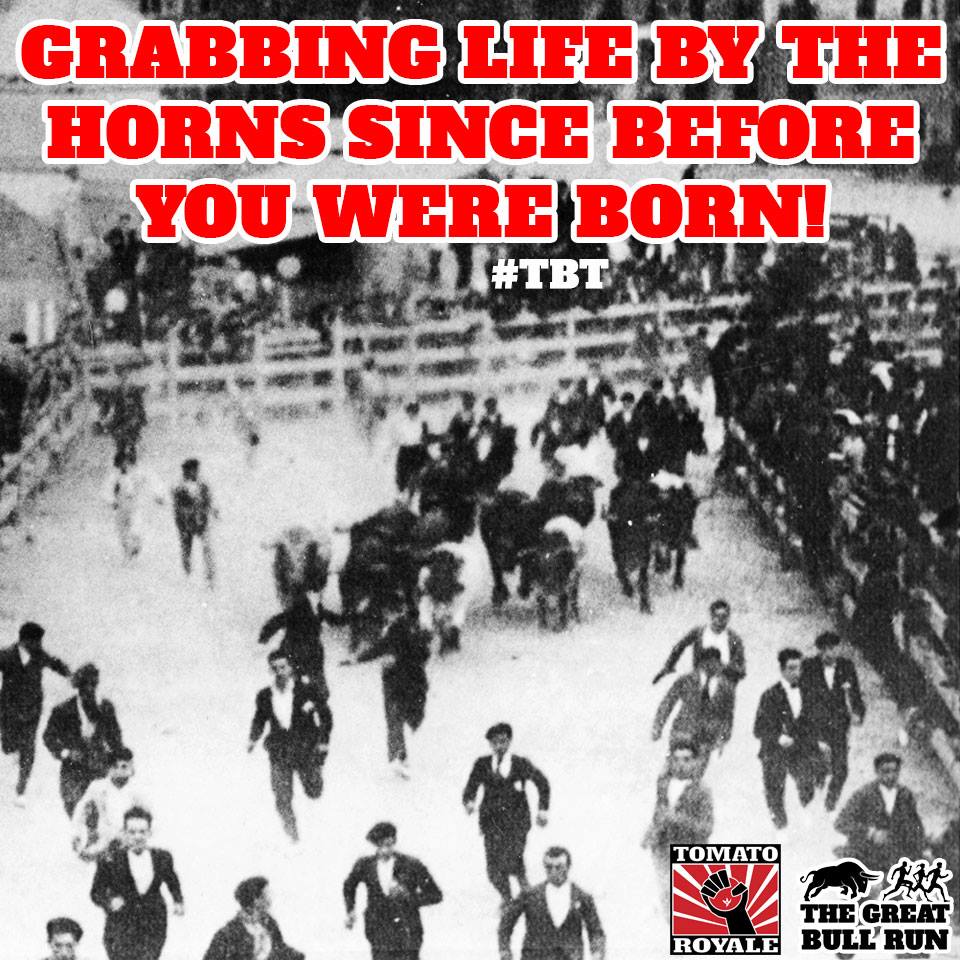 In spite of this move by Peta, from the web page of the event it is still possible to book tickets online and no mention is made of any possible problems. In fact, all the cheaper tickets for the event are already sold out. The organizer, Rob Dickens, has made a public reply to the Courthouse News by stating that they do not mistreat the animals in any way nor do they use whips to stimulate the Bulls and he states that horses are used by professional handlers simply to ensure that the bulls don’t turn back on the course. He points out that the breeding of animals and their management under professional hands is not prohibited in The USA.

Peta also alleges that the animals not only suffer in the bullrunning itself but also in their being transported, as they must travel at average distances of no less than 1.500 kilometers (in the case of the Californian run– the distance from Kentucky- is some 3.700 kilometers). Peta also insists that this suffering caused to the animals as well as the actual running of the Bulls on the day of the event brings in an income of some 147.000 dollars in profits for the organizers of the event, without counting the money made from food and drink sales on the day. It should be remembered that these private runnings of the bulls are held in private land and that the participating runners must sign a contract in which they promise to accept the conditions established by the organization. 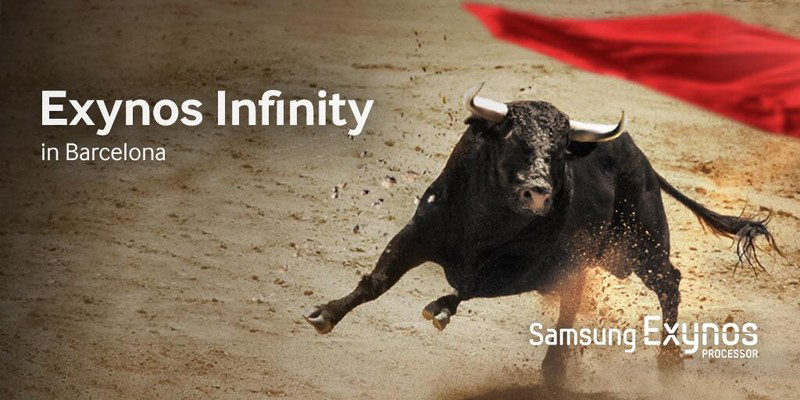 Samsung, through its  twitter account for its Exynos processor, launched an image of a bull announcing that the Mobile World Congress 2014 held in Barcelona this weekend would reveal details about its new Infinity processor. In Barcelona, bullfighting events are currently prohibited by law and while we are drawing up some possible similitudes of this campaign with that of the case of the photographer, Daniel Ochoa de Olza and the World Press Photo (check the article in La Vanguardia newspaper), Samsung has announced through the same media outlet that it was withdrawing the campaign. “We respect animal rights and had no intention to promote the opposite. We apologize to all that may have been offended”, reads the curt note that has been issued by the firm in a brief press release. 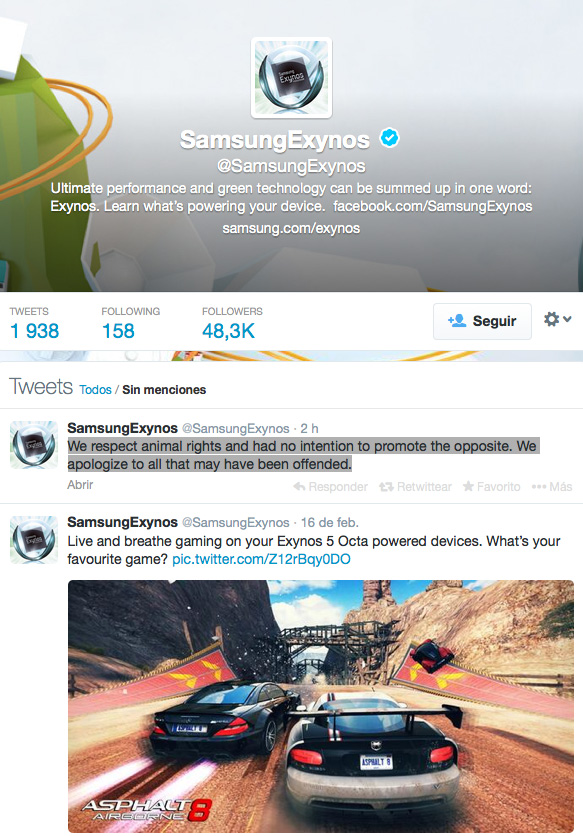 In this twitter searcher we can see that many people threatened not to buyany more Samsung products and some even considered the withdrawal to have come too late. 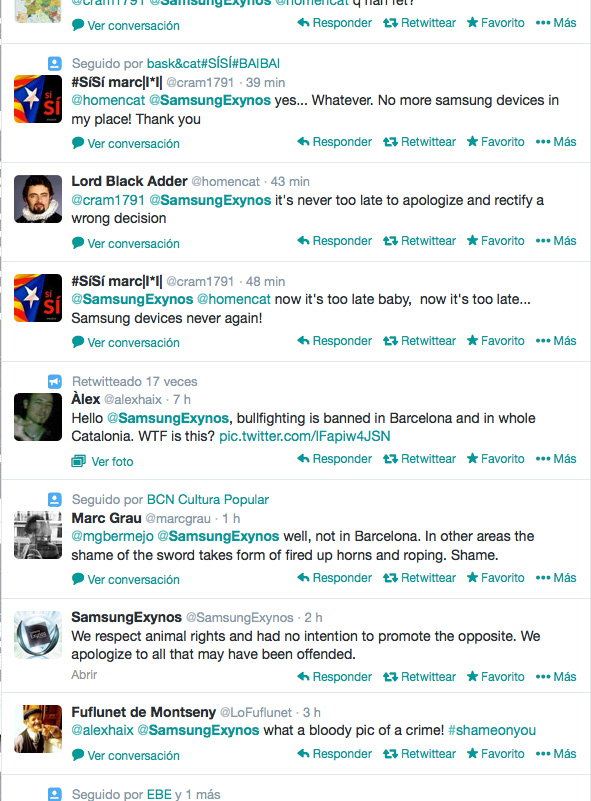 These kinds of actions are nothing new. Anti-bullfighting pressure has resulted in the damage of some big marketing campaigns such as that of Pepsi in New Zealand (see news item in Sanfermin.com). Then there were other cases of firms not achieving their aims such as the withdrawal of the Snowwhite movie (see news item at lainformación.com) 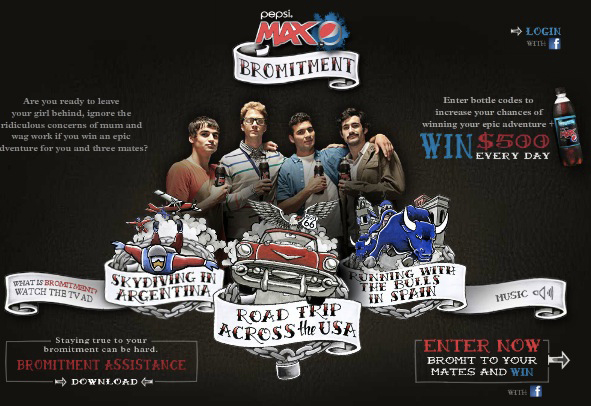 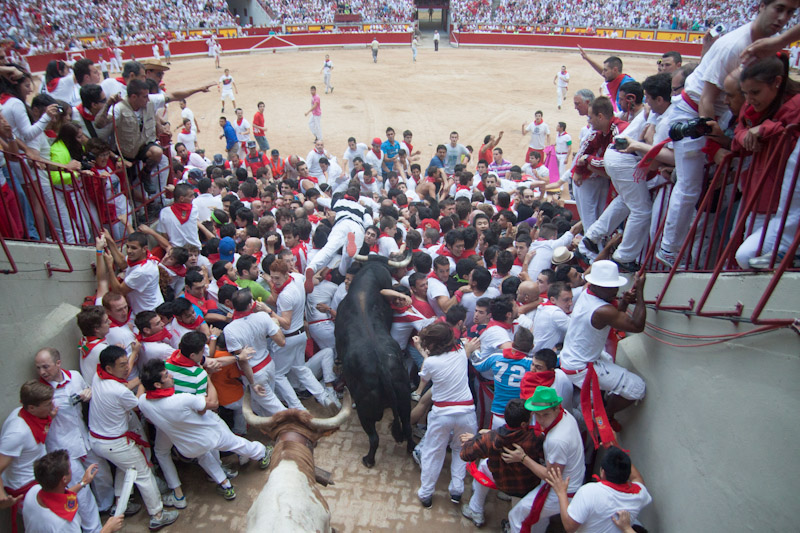 While in Pamplona the current debate is about whether the runners should all wear white gear and perhaps pay a small sum of money to be allowed to take part in the running of the bulls, the international debate about the bullrunning is quite a different issue. Thanks to what we have learned from an article written by Steve Hawkes for the British newspaper, The Telegraph, it seems that the International Thomas Cook Travel Agency has cancelled all its promotion of the Pamplona Running of the Bulls and the Sanfermin fiesta in general, due to pressure from the anti-bullfighting group, PETA. The British branch of this organization in defense of animal rights has confirmed this item of news. However, for the moment, the Thomas Cook Travel Agency is refusing to confirm directly to us the truth of the news item published in the newspaper. Other British newspapers are taking the news as true and publishing similar reports about the Thomas Cook agency and the confirmation made by PETA. In addition, Peta also assures the public that the same step will soon be taken by First Festival Travel Agency, as from January 2014. These actions can now be added to those steps previously taken in  similar campaign actions two years ago which caused the withdrawal of a campaign for Pepsi in New Zealand as well as the cancellation of various publicity campaings in the USA which offered prizes of a trip to Pamplona fiestas for the winners.

The Thomas Cook Travel Agency was conceded an award in 2002 for its family tourism vacations and it is also one of the largest travel agents working online. For the moment, they have not modified their web information about Pamplona and it reads the same as it has done for the last year or so. Even here, the running of the bulls is not given any overt treatment in the images shown on the web page. What they have done is to eliminate any reference to the running of the bulls or to San Fermin within their own internal searcher. 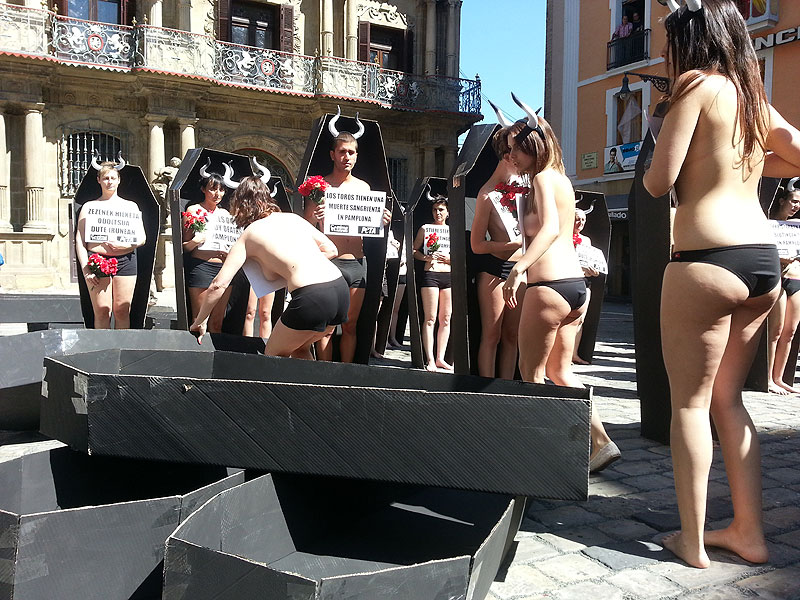 The PETA (People for the Ethical Treatment of Animals) Association, once again have made their traditional protest against animal abuse on the eve of the start of the Sanfermin fiestas. An ample group of activists from the organization gathered in front of Pamplona City Hall dressed up in horns and faking to be laid out in black coffins. They carried some paper placards displaying slogans such as “Bulls find a bloody death in Pamplona”. The event caused a large crowd of onlookers to gather as well as attracting the attention of the local media. 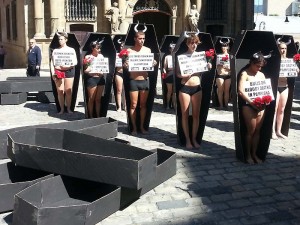 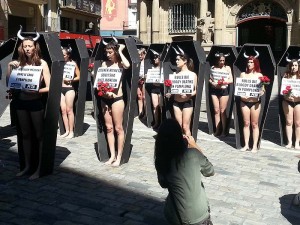 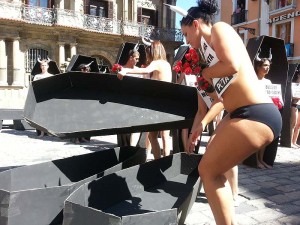