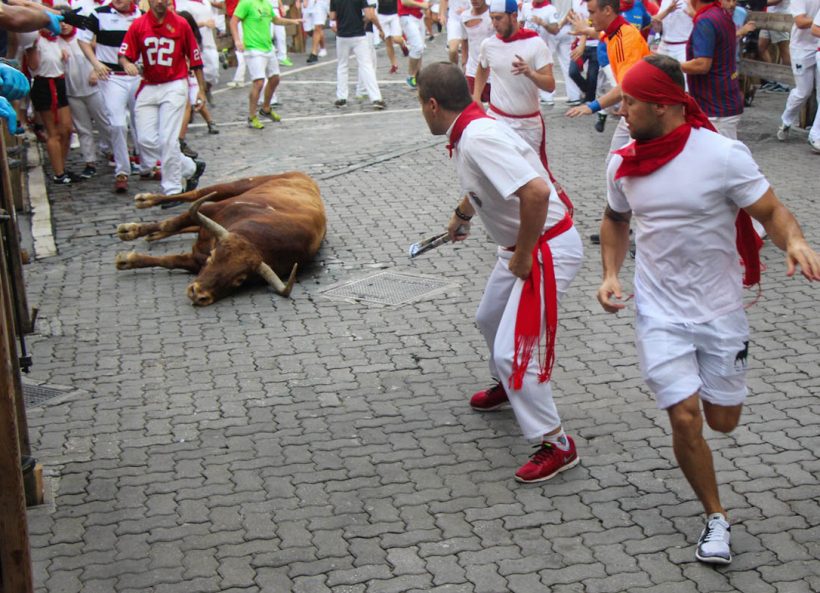 The physical condition of the fighting bull could not be expected to be fully perfect and today one of its “weak” points was clearly shown in this morning’s bullrun: when it falls on its side, it has real difficulty in getting back on its feet. In today’s fifth Running of the Bulls of Sanfermines 2016, two of the fighting bulls, a black one and a brown-colored one, both suffered slip-ups and fell to the ground on their sides. Were it not for the help of some of the runners, who raised the bulls onto their feet again, the two bulls would have taken a lot longer to get up and run on to the end of the course inside the bull ring.

Both bulls slipped up as they raced down the entrance leading into the bull ring. The black fighting bull successfully struggled to get back on its feet, but the brown-colored one, which had fallen completely on its side, could not get back on its feet by itself. It remained impotently stuck to the ground as the other bull raced on into the passageway leading to the bull ring where it slipped up once again. Here, before falling on top of some runners this black bull grazed the neck of one of the falling runners  amid the mayhem of the small pile-up of bodies and the animal fell right on top of the prostrate runners.

The runners at first hesitated in front of this spectacle of the prostrate bulls, but soon a couple of brave runners hurried to help the animals regain their standing position by pulling at the horns of the two prostrate animals. This bull-runner alliance quickly paid off and the bulls were finally able to continue their run ahead into the bull ring and away to the safety of the pens inside the ring.