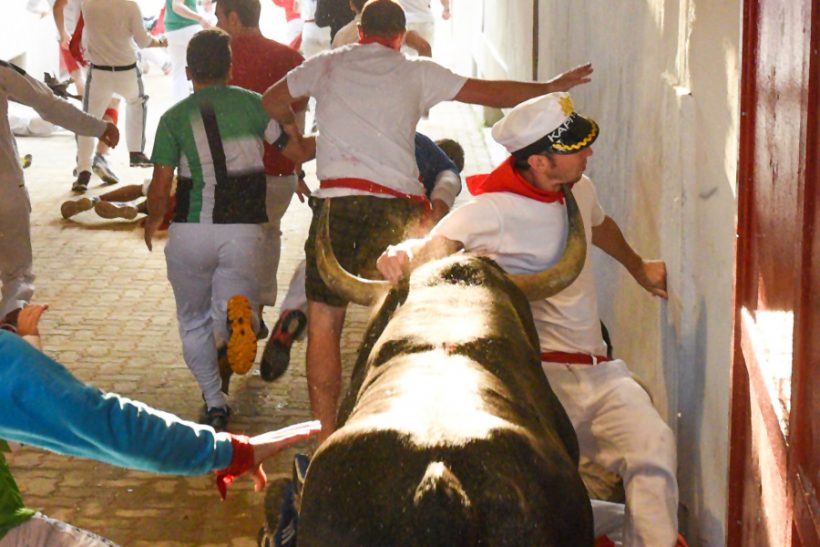 Yesterday two runners were gored at the entrance to the arena.  And today, in the firth running of the bulls, it was easy to believe that there would be a report of another goring this morning when we first saw this photo from José Indart. The image suggests that the runner is getting a jab to his throat from the horn of the bull. However, surprisingly, the bull did not harm the runner. It seems that they only thing that the runner lost was his sailor’s cap.

The black bull is hobbling a little as it had just had a bad fall on the slope leading down into the entrance to the bull ring. Upon entering the passageway leading to the arena on the right side, the bull met a group of runners who were falling over a prostrate runner on the ground.  The bull continues it run straight ahead and its horn seems to touch the throat of the unbalanced runner with the captain’s cap.

Luckily, the unbalanced runner falls on his back and the bull simply pushes him with its horn without causing him as much as a scratch, although the image would suggest a much more brutal outcome. In fact, when this runner did get back on his feet, he hesitated for a moment or two, perhaps wondering if it were worth the trouble to try to find his fallen cap, which probably lay somewhere under the fallen 500-kilo-bull.

In fact, the runner quickly turned away and vanished. The infirmary inside the bull ring issued a statement a few minutes later confirming that none of the runners had required any medical treatment this morning. Yet another miraculous escape at the entrance to the bull ring.