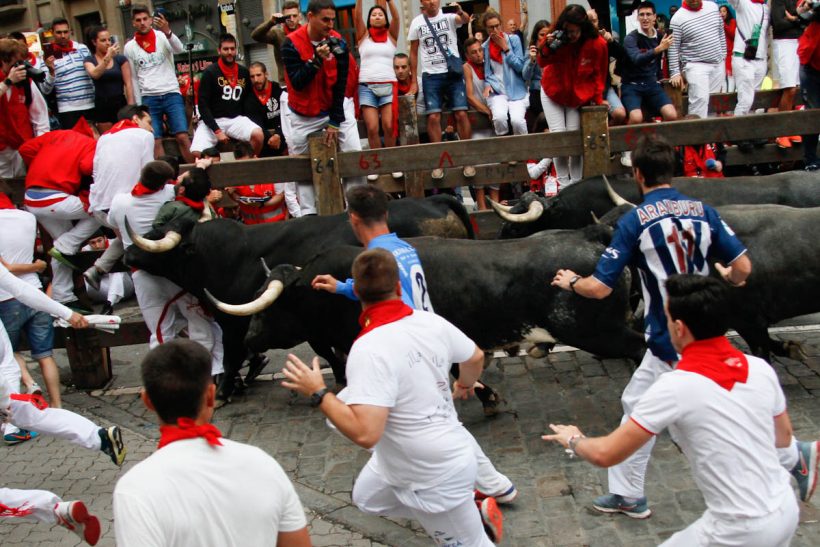 The eighth and last Running of the Bulls of Sanfermin 2017 was unfolding in a predictable form, with the bulls running at a frenetic pace. The Miura bulls had knocked over several runners on the Mercaderes and Estafeta stretches, although without attempting to gore any of the runners. But when the bulls entered the Telefonica stretch, they raced along the fencing on the right side almost in file at a ferocious pace.

Several runners coming from the top of Estafeta ran towards the fencing on the right side as they aimed to sidestep the approaching bulls, but the Miura bulls had the same plan and turned to the fencing on the right side. Some of the runners attempted to climb up onto the top of the fencing. However, the charging bulls arrived with such violence that they knocked the runners off the fencing as the charged ahead. First, a big black bull who was leading the others, charged at the runners, then the second bull coming immediately behind and then the rest of them. One of the runners was tossed in the air; another received the whack of a horn to his head while others were knocked to the ground.

Although it seemed that the whole thing might turn into a slaughter, none of the runners suffered any goring. However, according to the hospital report, some of the runners here suffered severe contusion and traumatism and they will likely need prolonged hospital treatment.