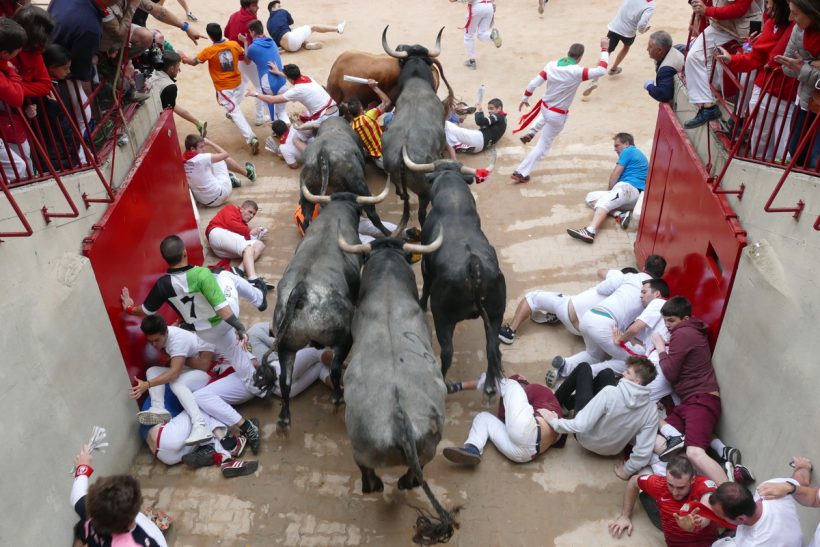 The most dangerous moments of the final Running of the Bulls of Sanfermin 2016 occurred at the entrance to the arena when a small pile-up of runners was formed which created a grotesque few moments where bulls, bell-oxen and runners all got entangled together in a kind of grotesque version of a Marx Brothers pandemonium scene. Surprisingly, nobody came out of it with any kind of serious injury.

It all happened in an instant. A black bull knocked over several runners on the left side while a brown-colored one pushed a runner down right in the middle of the entrance. This caused a general pile-up as approaching runners from behind all tripped over the fallen body.  Meanwhile four other bulls coming behind also met the obstacle of bodies,  animals and runners that quickly formed there.

The six bulls came together again at this entrance and managed to pave a way through the fallen runners without paying any further attention to them. As they got to their feet, one of the bulls caught a runner by his tee shirt but did not hurt him. A bell-oxen also got entangled and stepped on some runners.  The upheaval disentangled little by little and the scene returned to normal without more ado. The infirmary inside the bull ring treated 3 runners and 2 of them were taken off to hospital for further examination. None of them had suffered any kind of serious injury.