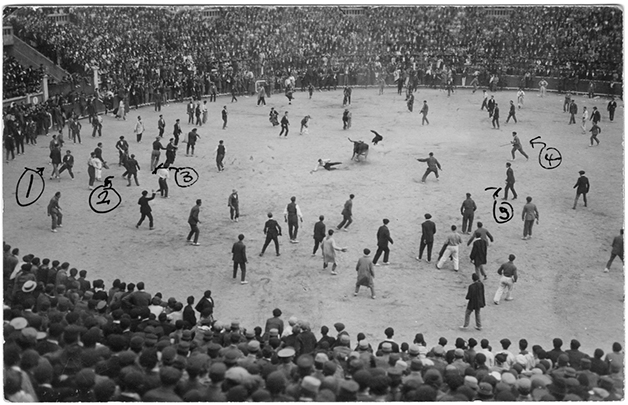 We have come across yet another proof that Ernest Hemingway was indeed to be found at least once in the Pamplona bullring arena immediately after the Running of the Bulls during fiestas. At Sanfermin.com we have already pinned up two earlier photos; one that we discovered in the archives of the Ernest Hemingway Photograph Collection from the John F. Kennedy Library in Boston (Here). The second comes from a publication from Harper Magazine and which is contained in the book – The Letters of Ernest Heminway: Volume 2, edited by Sandra Spanier. This current image is a photo/postcard, typical of the period of the 1920’s, which was sent from Pamplona on the 13th of July, 1924 to Gertrude Stein and Alice B. Toklas who were both living together in Paris at that time.

In the postcard missive, Hemingway identifies himself along with some of his colleagues, within the arena of the Pamplona bullring, sporting with the young bulls which were let loose immediately after the Running of the Bulls had finished. EH describes the event as a “Novillada” and gives a brief account of what where his second Sanfermines in Pamplona.

The image comes from the Beinecke Rare Book & Manuscript Library at Yale University by way of the Press Department of the University of Cambridge. 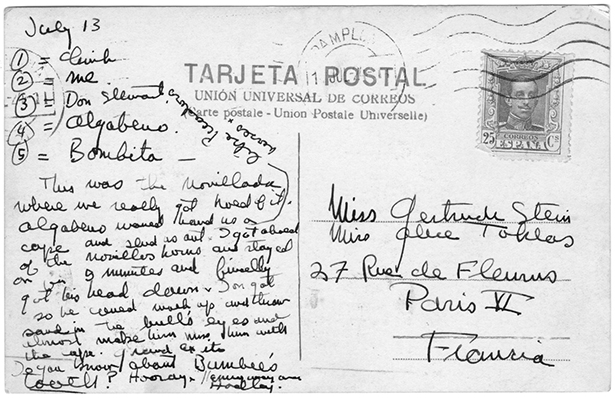