As from this week, this movie is now available in the Blu-Ray market in DVD. A Reediting of this Italian movie “Il momento della veritá” (The Moment of the Truth) has been made and it shows images from the Pamplona running of the bulls and the bullring from that period. The Criterion Collection is a New York company which specializes in recovering uncatalogued movies and which it then sells through internet and other platforms. TCC has attained the rights of this movie and it has restored it in high definition. It maintains the original soundtrack without compressing in the Blu-Ray edition which is selling at 24 dollars. In the HD copy in DVD (selling at 16 euros), the soundtrack is compressed but it also of good quality and only professionals in the trade would be capable of appreciating the difference. The pack has been edited as if it was a book and it includes an interview with director Francesco Rosi made in 2004. There are sub-titles in English and a review of the movie written by critic Peter Matthews. See Trailer.

The film narrates the life of bullfighter Miguel Mateo Miguelín and deals with his rise from a small town to his years of fame. The movie shows his beginnings as a “spontaneous” would-be bullfighter and how he eventually becomes a “maestro”bullfighter. Various critics have mentioned how Rosi appeared in Pamplona with the script under his arm and a pencil in hand to start preparing the movie right in the middle of the Sanfermin fiestas. His experiences over those days led to the type of images that are shown in the movie, as for example in the A.V. Club by Scott Tobias. A notable review can be found in the New York Times 1965 as well another one that can be found at Blu-ray.com 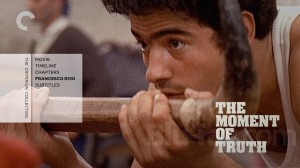