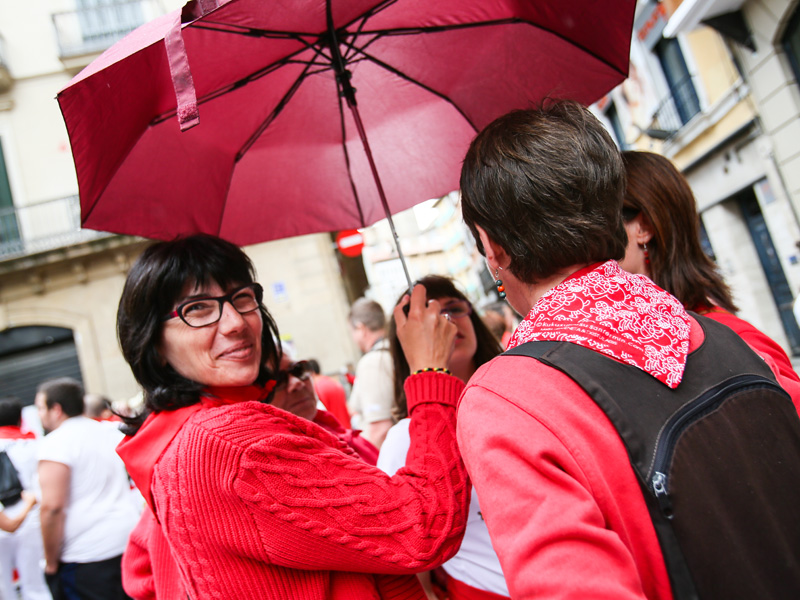 A week before the Sanfermin fiestas begin and the weather is the main topic of conversation in Pamplona: – Is it going to rain? Are we going to freeze from the cold? Let it not be as hot as it was last year, please! And so, in the days leading up to Sanfermin, the forecasts online are our best ally. We are checking them every five minutes just in case. We don’t want to ruin our day by finding that a 75% forecast of rain has now become a 76, 5% forecast! The question is to moan and moan.

But when the moment arrives and you see that your cell phone is telling you (that gadget that is so precise in its predictions that no two cell phones ever have exactly the same figures as yours) that the weather has definitely changed for the worse and where there had been two clouds and one drop – there is now one cloud and three drops – you resign yourself to the obvious and you find yourself coming out with the typical Pamplona cliché: “What can you expect, this is Pamplona, after all.”

But let’s get one thing clear. You NEVER stay at home even if it is raining cat and dogs or there is hail, rain and snow falling. Sanfermin takes place once a year and when it comes, the weather takes on a secondary role.

And the 6th of July finally arrived and we don’t give a damn about the bad weather. The bars had their shades up and the people could sit and eat and drink on the terraces as usual. Some girls had their bandanas tied around their heads, in peasant style, and there were even some so careful as to bring their umbrellas along with them. But most people had enjoyment stamped on their minds and rain became a secondary issue when for most of them the liquid that fell from the sky was in the form of sangria, cava champagne, beer and wine. And of course, as always, after the Txupinazo, the tradition of calling for buckets of water to be poured from the balconies inevitably continued the same as on any other year.

Avoiding the rain this year was impossible in Sanfermines. It rained every day over the nine days, except on the 13th of July, which was the only normal day in terms of warmth and dryness. But the partying went on at its usual pace, despite the rain. The Giants and their entourage were out and about as usual. The Peña bands and the other ones too have played in the streets as usual. The street sellers, who were selling their typical fiestas glasses, only offered you the chance to buy an umbrella when they saw that your arms and fingers were already covered in all the trinkets you had been buying from them over the previous days.

At the bullfights, the rubber hats in the form of a bull served as improvised umbrellas on the “sunny” side of the bullring this year. At the Labrit, the three marques sheltered everyone who could squeeze in, as it was one of the few shelters to be found in a sq. kilometer area… But who needs shelter when you have a colored portable umbrella tied over your head?

Dancing in the rain was just another way of having a good time this year and did not prevent the perennial Sanfermin enjoyment from happening. So, now you know what to say if the rain is forecast for next year again in Sanfermin: “Let it catch us dancing”.