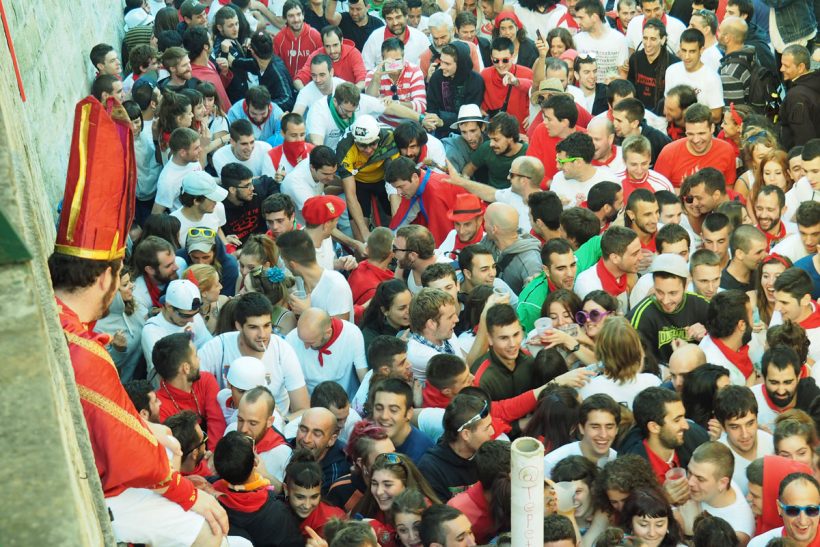 More people. Bigger Partying. Even greater fun. And no wish for the fiestas to finish. As always, in the early morning of the 15th – this event, which started out as the “Running of the City Bus”- many years ago and which seems to attract more and more people each year, took place once again this year. The general comment going round was that this event has more runners than the correct Running of the Bulls on the 14th and final day of the proper event.

Many of those who refuse to go home to bed after midnight when the fiestas are declared by the Mayor to have closed, tend to congregate at the first stretch of the Running of the Bulls in Santo Domingo. And then the typical traditional act begins to unfold. The mythical “Spada” bicycle from “ Induráin” flying up and down the course in front of and behind the crowd of runners. This is a San Fermín skit ,or perhaps farce ,which also features a “San Fermin” perched on the niche which normally holds the figure of the saint. Two curious incidents took place this year, a girl “attacked” the “saint” and tried to bite him in different parts of his body. Then the bicycle needed to stop for repairs three times along the route. Nobody seemed to mind very much.

The fiesta went its way. Even at 10 a.m. there were still some bodies to be seen wandering round the streets of the old quarter of Pamplona. As is well known, each of us has the right to call it a day when and where we like.