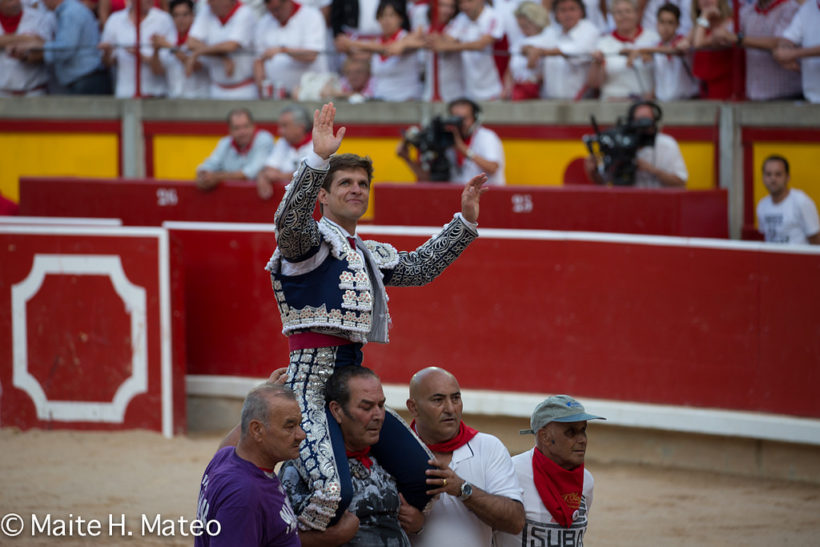 Even if a draught comes in or the cat gets out, the Running of the bulls main gate must be left open, because El Juli never fails, and every time he comes, he is brought out shoulder-high. And well-deserved too. Yesterday – for the tenth time – he did it yet again. He was awarded an ear for each of his two bulls and he deserved it and showed his worth as always. It was not his best ever afternoon in Sanfermin, but it was enough for the middling bulls that he was given.

Juan José Padilla had been waited for as if he were the Messiah himself, with pirate flags, eye patches galore, all the usual paraphernalia from the sunny side of the bullring. But the popular toreador did not live up to expectations even though he was better than his first performance on the opening day of the bullfights. He did not have much luck yesterday. With his first bull he did get a parade around the arena but with his second, just some timid clapping.  Miguel Ángel Perera got an ear with his first, but he could not complete the afternoon as he did not kill cleanly and his performance simply was not good enough to deserve an award. Silence.

As yesterday afternoon’s bullfights had a bit of everything, it also had its “anti-bull streaker” protest but the man was quickly taken out from the arena.

Tomorrow, the big Miura bulls. On the last day of the bullfighting week.