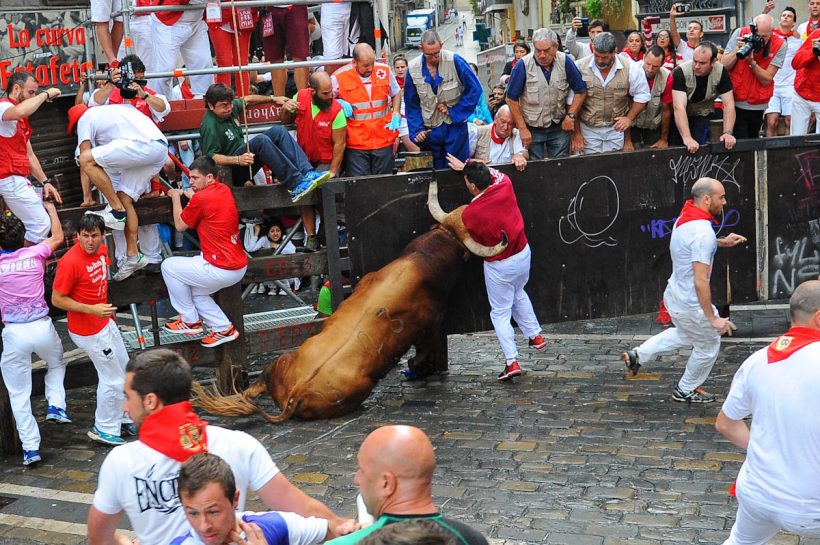 Mercaderes corner has always been a key spot along the course of the Sanfermin Running of the Bulls. That is, until 2013, when it was decided that the pavement here should be given a coating of anti-slipping liquid to prevent the regular slipping and sliding that occurred to the bulls at this corner. It used to provide some very spectacular slip-ups at times but it also increased the danger as the bulls that fell down often become detached from the pack and ran loose. So, since this anti-slip liquid has been applied, the drama is somewhat more muted but, from time to time, there are still some scary moments to be seen here.

This morning’s fourth Running of the Bulls of Sanfermines 2016 brought this corner into the spotlight once again. A young man dressed in a red jacket sensing the approach of the Pedraza de Yeltes bulls, tried to leap up onto the wooden protection front that serves to ensure that the bulls run on into Estafeta, instead of seeking an escape gap at ground level under this wooden boarding which is expressly made for this purpose.

His mistake almost turned into a tragedy. Just seconds before catching the runner, one of the big 600 kilo bulls slipped up and slid along the pavement and just knocked against the fallen runner with his right horn. He just missed giving the runner a goring by seconds. Both bull and runner kissed the ground at the same time and, thanks to the clumsiness of the fallen bull, the runner who had initially failed to find his exit gap, now rapidly and gratefully slipped through the gap in the fencing and so saved himself from a much darker fate.