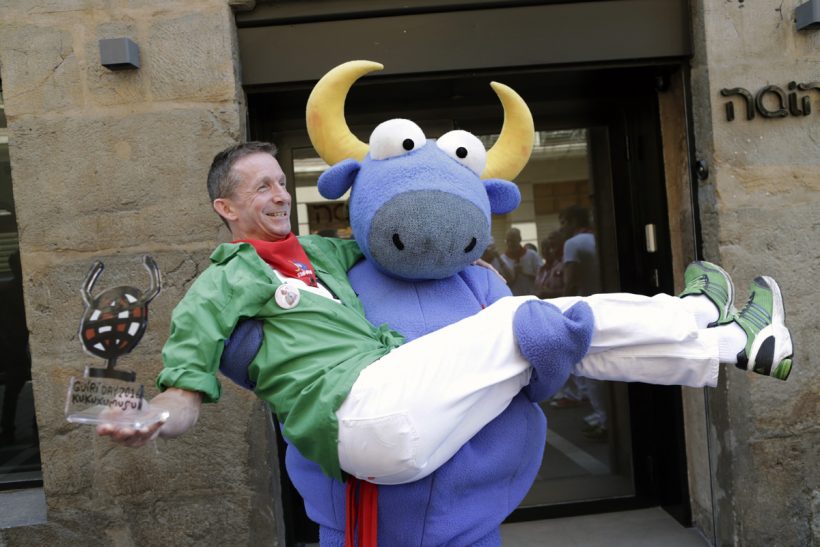 Englishman Timothy Nicholas Pinks was today awarded the 13th Guiri del Año Award, an  annual Sanfermin award which the Kukuxumusu firm has been conceding ever since 2004 to one of those many regular foreign visitors to Sanfermin who stand out for their passion and love of the Sanfermin fiestas.

He was born in 1962 in Tripoli (Libya), although he is of English nationality and now lives in London. Tim Pinks is a writer and columnist and he has published two books on Sanfermin, “Bullseye” (2012) and “Once upon a time in Pamplona” (2015). He has been a constant visitor to Pamplona and its fiestas ever since he came for the first time in 1984.

The award was handed over by Mister Testis, the popular blue bull from Kukuxumusu, who played the role of host alongside some representatives from the Pamplona firm. There was also a party of foreigners of many different nationalities, among them previous winners such as North-American Lore Monnig (2004) and Catherine Donnell (2012), the Swede, Lars Ingvar Jungefors (2006),  Chiyoshi Sugawara from Japan (2010) as well as a previous English winner, Frank Taylor (2009). The children of the German, Manfred Walloschke (2007), came in his representation as he himself could not make it this year to Sanfermin. 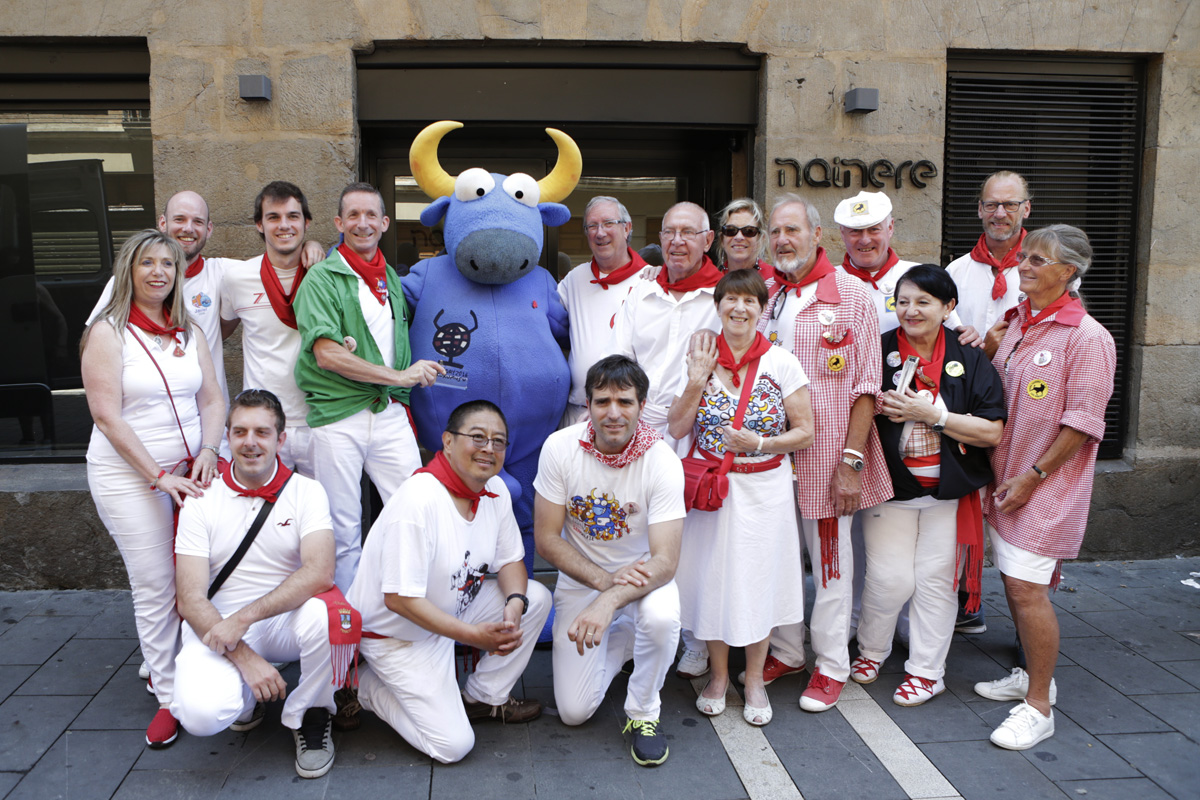 Among some jokes and jibes about Brexit and the situation of the United Kingdom at present,   Pinks expressed his excitement and satisfaction at being given the award and said he was pleasantly pleased by the large number of congratulatory messages he was receiving from friends and from media outlets over these past few fiesta days. “I feel very grateful to Kukuxumusu and to those previous winners of the previous years”, he sincerely assured everyone.

The winner reiterated his initial statement on hearing that he had been given the award when he stated: “I am not a PTV (Pamplona de Toda la Vida- a born and bred Pamplona person) nor do I have any Navarra blood in me, but in a certain way I do feel a PMV (Pamplonés la Mayoría de la Vida – a Pamplona person for most of my life). And, believe me; I really do have more red Pacharan spirits in my veins than real blood”.

After the award was handed over, the large party of guests of many different nationalities were invited to a cocktail and a lunch at the Nainere gourmet club where further gifts were exchanged among the large party. There was soon a veritable tower of Babel in progress as a large mixture of languages could be heard emanating from among the animated party, such as English, Swedish, French, German and Japanese.

Tim Pinks first discovered the Sanfermin fiestas in 1980, reading the book “The Drifters”, by James Michener. This book includes a chapter about the fiestas back in the late 1960s. He knew from that moment that one day he would have to pay a visit to Sanfermin in person. “I could never have imagined that a fiesta from the middle ages could continue to exist down all those years and right into the XX century”. Ever since 1984, when he visited Pamplona for the first time he has continued to visit every year without fail over these past 33 years. As Tim expresses it:  For me, Sanfermin is heaven on earth”.

He was a constant runner in the Running of the Bulls event for the first 15 years and Pinks ran for the last time in 1999. However, he continues to watch the event from balconies and fences so as to cheer on his friends and acquaintances who continue to take part in the event. Meanwhile he continues to live the fiestas with passion and intensity. “What have I contributed to the fiestas? Perhaps, my body, my spirits and my enthusiasm and love for this city and for its people and for its fiestas. But the most important thing is not what I may have given, but rather what I have received from this beautiful city with its incredible people and its unequalled fiestas”.