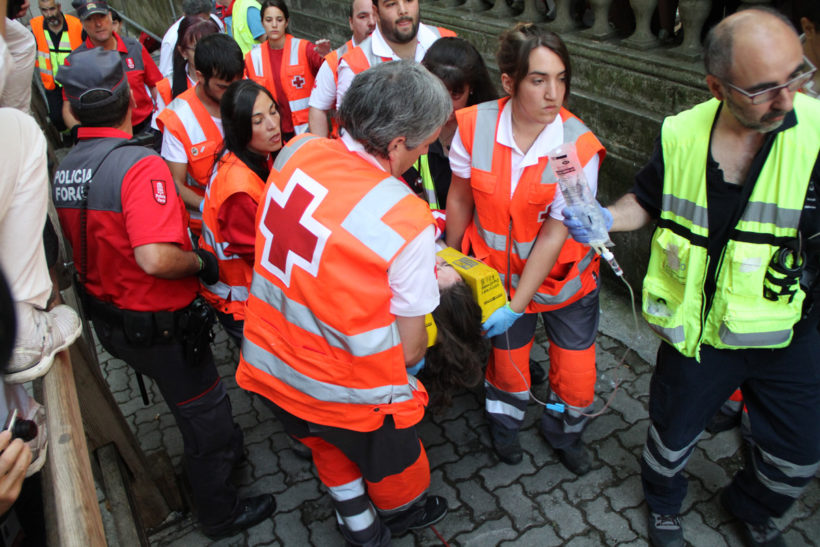 After the goring which the young 23-year-old Australian runner J.E., suffered last July 14th,  we could read in the different media outlets that she was only the third, the fourth, and finally, only the fifth female runner ever to receive a goring in the Pamplona Running of the Bulls. But for Sanfermin.com, she was always going to be the fourth ever such case.

To say that there have been five female gorings is an error, as we will see outlined below. But perhaps it has been one of the most widespread errors ever spread about an incident in the Running of the Bulls, after the publication of this piece of news, which was never properly checked, and which spread like wildfire across the Internet as can be seen in the Google search.

Initially, in the heat of the moment and with breaking news, when it was reported that a girl runner had been gored on last 14th July, a lot of media outlets stated that this girl had become the third case of a female goring in the long history of the running of the bulls. But two other cases had been left out while another one of the cases mentioned was, in fact, a traumatic contusion injury. This was the case of the American girl, Stephanie Kern. From the first moment, Sanfermin.com published the fact that there had been a total of four gorings: Anne Karlin Kvan NOR 8/7/91, Jennifer Smith USA 7/7/01, Elinzey Sain 7/7/02 and the most recent, J.E. 14/7/2013.

Throughout the rest of the week, some of the media began to correct the error or change the numbers. However, most of them continued to name this American girl, Stephanie Kern as the first case of a female goring in the history of the Pamplona Encierro when, in fact, this girl had suffered a severe traumatism to her head and not a goring.

It happened on the 14th of July, 1990 when a bull from the Conde de la Corte bull-ranch, knocked down Stephanie Kern at the end of the Santo Domingo stretch. The girl suffered a very hard blow to her head and a blow to the nape of her neck which provoked a cracked bone in her skull. In the images shown on TV and in press photos, it looks like the right horn of the bull had caught the girl in the back. In fact, the horn momentarily caught the red Sanfermin sash that she was wearing.  The violence of the fall and the photo taken by Calleja in the local newspaper, Diario de Navarra, showing the sash hooked on the horn, perhaps leading to the error of thinking that it had been a goring, although the later information of that same day discarded that idea.

Nowhere was it stated that she had received a goring. Neither in the medical injury report offered by the Government of Navarra, nor the testimony of her mother Hanna Kern (who had travelled with her daughter for those Sanfermines), nor any of the subsequent information compilations made available over the years (“25 years of  Encierro in Pamplona” by Javier Solano, “Los Sanfermines de nuestra vida”, de Ignacio Murillo y Jesús Rubio, “the Golden book of the running of the bulls”, from the Diario de Noticias and Caja Navarra or the special study made by Kukuxumusu and the UPNA university for the Encierrómetro), nor any of the local newspapers, or nationals ones or even American ones (more than ten) mentioned anything about a goring. Indeed, they actually did the opposite, by stressing that it had not been a goring from the horn.

So why then was it accepted that it had been a goring and given such widespread diffusion this year? Probably due to two basic reasons:  Firstly, because the habitual trustworthy sources failed and secondly, they used the information from other sources without checking the facts. Indeed, all that mis-information could have been avoided if many of those media outlets had checked their own bibliographical files and archives.