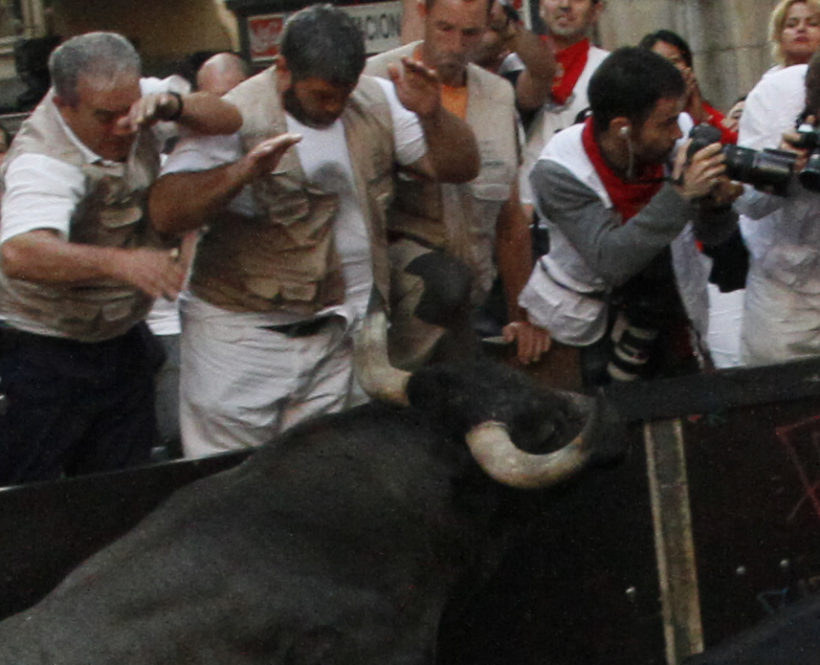 Sometimes, in the running of the bulls, things happen so fast that we fail to see them clearly. Two people who won’t forget today’s run are the two carpenters from the Aldaz y Remiro firm who are responsible for the fencing of the course. Each day, they close the gate once the bulls have gone through at the corner of Mercaderes with Estafeta. In this way, they ensure that the any bulls that turn back won’t get further than this gate. The third Miura bull in this morning’s run running at the corner crashed into the wooden gate and slipped on its feet, causing it to raise its head and horns to the same height as where the photographers and carpenters had climbed up on the fencing. As can be appreciated in the photos taken by Iñaki Vergara and Manuel Corera, the horn grazes the protection-jacket of one of the carpenters and it actually gets between the shirt and the jacket of the other one.

What turned out to be a simple grazing of the horns could so easily have caused a serious injury. This image is not uncommon with the huge Miura bulls that can reach up with their horns to the height of the fencing and especially when they hit this corner. The carpenters pulled away their hands and just missed the horns by the skin of their teeth by pulling back. But anything could have happened in those fleeting seconds of danger, as the images show.