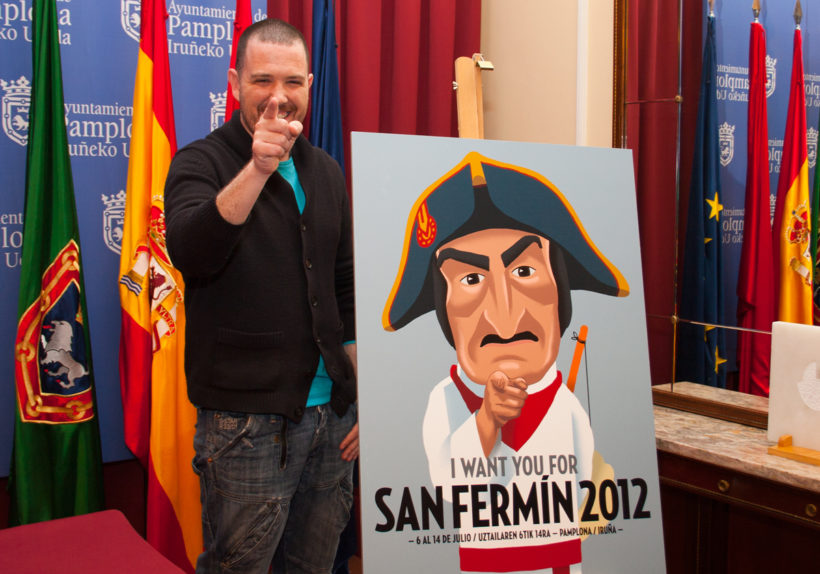 David Alegría, a graphic designer from Tudela (Navarra), has been declared the winner of the Sanfermin 2012 Official Poster Competition. His particular design, using one of the “Big Heads” – Caravinagre – a member of the Giant’s Entourage, is a design made in imitation of a poster designed by Alfred Leete in the magazine, London Opinion of 1914 showing Lord Kitchener calling all Englishmen to enlist for the war. David Alegría has also acknowledged the influence of the design made by J. M. Flagg in the USA showing Uncle Sam calling for enlistment during The Second World War. Luckily, this time around, the design is for a festive occasion, i.e. for the World’s Biggest Party of 2012. And that is the wish of the 1, 910 voters resident in Pamplona who voted for this design from among all the finalists (almost 30% of the total number of votes cast). More than 300 votes separated the winning design made by Alegría from the second placed design and so there are doubts about the popularity of the winning design. David Alegría points out that he chose this particular design thinking that it would appeal to the foreign visitors who come to the city during Sanfermin fiestas. Alegría gave a personal perspective to the image of Caravinagre by changing his lateral look for a frontal one and, thanks to the advice of his girlfriend, he dressed the figure in typical Sanfermin gear.

Enrique Maya, Pamplona’s Mayor, has stated that he is very happy with the result and with this poster design which will publicize the official fiestas program of Sanfermin 2012 and he feels that it is pleasing that the Giants and their Entourage should be chosen as the theme of the fiestas. Caravinagre has twice been protagonist in previous poster designs – in the design of 1997 (Joseba and Mitxelo Gurrutxaga) and in 1947 (José Luis y Juan María Cía). This is the first time ever, in the lost history of Sanfermin poster designs, that the text is written in English with the caption : I want you (for) Sanfermin 2012.