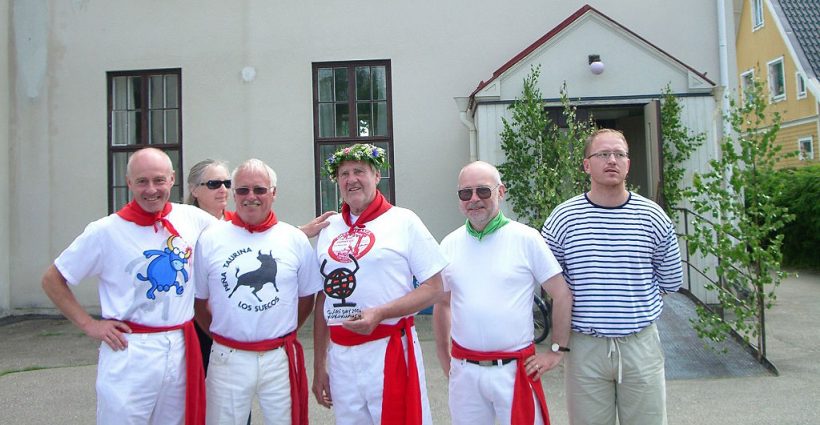 Next Friday, 23rd of June the III “Foreigner of the Year” award will take place in Storvik, Sweden. This award is granted by the Kukuxumusu tee shirt company in homage to the many foreign visitors who come annually to Iruñea/Pamplona for the Sanfermin fiestas. On this occasion the award-winner is Lars Ingvar Jungefors, a member of the Los Suecos Peña, and a veteran visitor to Pamplona over the past 35 years.

The award will be handed over by Mikel Urmeneta, a founder-member and creative director of Kukuxumusu. The event will also be graced with the presence of Xabier Ariztegi, an “aizkolari” (woodcutter) from Navarra who will give a demonstration of tree-trunk cutting as a homage to the award-winner who has worked for many years as a manager in Wetterlings hatchet factory, one of the most traditional Swedish firms.

After the conferring of the award there will be a dinner held which will be attended by many of the members of Peña Los Suecos. The event is expected to serve as an anticipatory warm-up for the imminent 2006 Sanfermin fiestas. Lars Ingvar Jungefors, a member of the Peña Los Suecos, will be the central figure of the event as he becomes the third person to receive this award.

In its first year, 2004, the award went to Carmen Margarita Alicea, a Puerto Rican resident in Sydney, Australia and in 2005 the award was given to the American, Lore Monning from New York. Kukuxumusu wishes to acknowledge the “passion for the fiestas” felt by Lars and his compatriots and to pay homage to all the Swedes in his name “to all those Swedes who have been coming to enjoy Sanfermin over so many years”.

As Mikel Urmeneta puts it: “I first came across Lars Ingvar in 200!, quite by chance in the Asador Zaldiko where he was doing the same as myself, having a T-bone steak and washing it down with some good wine. We hit it off and I later sent him some tee shirts and he sent me a hatchet. We thought he was a good candidate for the award for the way he hit it off with me, for his obvious passion for the fiestas and for his annual attendance over more than 35 years, and also for being a member of the well-known Swedish club, Peña Los Suecos.

The “Guiri Del Año” award is simply an excuse to allow us to show our appreciation for the presence of the foreigners who come to Sanfermin and who, as a result, make the fiestas even bigger, better and more universal”. The “Guiri Del Año” award was created by Kukuxumusu in 2004, although the Pamplona Company have been organizing an annual party – the “Guiri” day – over the last ten years in Sanfermin, in which they have always tried to pay homage to the foreign visitors. This year “Guiri Day” will be celebrated on the 8th of July, with a meal, and it will be attended by this year’s award-winner, Lars Ingvar Jungefors, the award-winners from the two previous years, a representation from the Peña Los Suecos as well as Mikel Urmeneta and other representatives from the Kukuxumusu Drawing Factory.