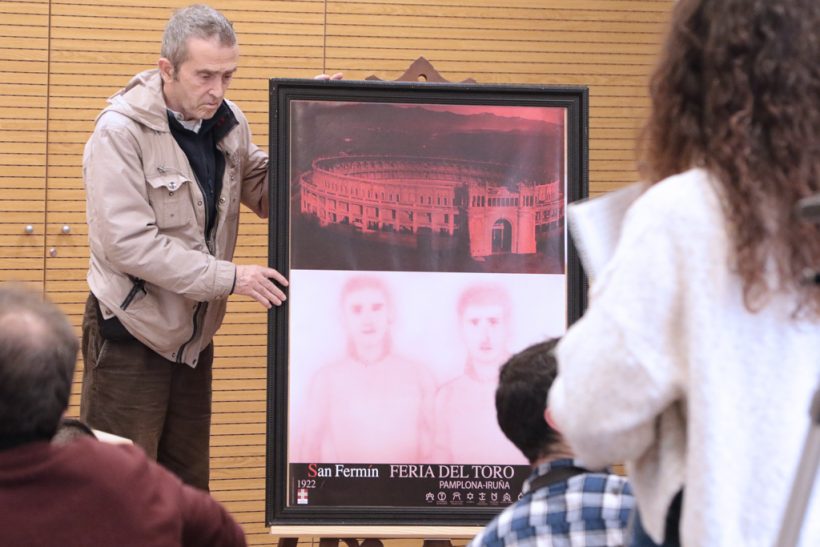 The Pamplona-born artist Juan José Aquerreta is the author of the poster for the 2022 Bull Fair. It is a work composed of the reproduction of a charcoal drawing and an aerial image of the Bullring in 1923 by Gerardo Zaragüeta with reddened inks. Aquerreta is an artist at the Marlborough Gallery where you can consult his extensive curriculum and much of his work. In the presentation of the poster at the Casa de Misericordia Aquerreta pointed out that “the bullring is the connection between bulls and men that under the blood red color means the passion of a tremendous festival such as that of the bulls.”

The author, National Prize for Plastic Arts in 2001 and Prince of Viana Prize for Culture in 2003, has highlighted that the work reflects compassion and respect among those who participate in the festival. “One of the characters is wounded and the other helps him. The work is a psychological expression of the human relationship that is a symbol of Sanfermin. The saint is a martyr who offers his life for the city, evidencing his relationship with God and with the city. The bullring is a wonderful building, it is a representation of the relationship between bulls and men, and blood communicates between bulls and human beings.” The author did not want to reveal the identity of the models used for the work, which he has, and which correspond to two cyclist brothers.

The member of the governing board of the Casa de Misericordia, Miguel Ángel Alonso del Val, director of the School of Architecture of the University of Navarra, has pointed out regarding the photo of the bullring that “It is an image from 1922 before to the remodeling of the square. The framing offers us a vision of the Pamplona basin, not only of the city, and reminds us of the amphitheater character of the construction, recalling the Roman reminiscences of the place”.

In defense of the bull in San Fermín

The mayor of Pamplona, ??Enrique Maya, pointed out that the painter is a resident of Estafeta street, like him, and recalled the importance of the fighting bull in Pamplona’s festivities. “Without the bull there would be no Sanfermin. The festivals would be so different that I can’t even imagine them. Acts such as the section, the mulillas or the running of the bulls determine the program of each day and generate unique atmospheres.” As president of the Casa de Misericordia and mayor he vindicated the presence of the bull in San Fermín. He, in turn, recalled that it has been two very hard years for the institution because the Bull Fair turns its profits on the attention of the residents of the Casa de Misericordia, a unique milestone in the world.

Regarding the celebration of the Sanfermin 2022 festivities, Maya said that “There is no going back. There will be no official announcement, the program will be presented step by step as it has always been done.”