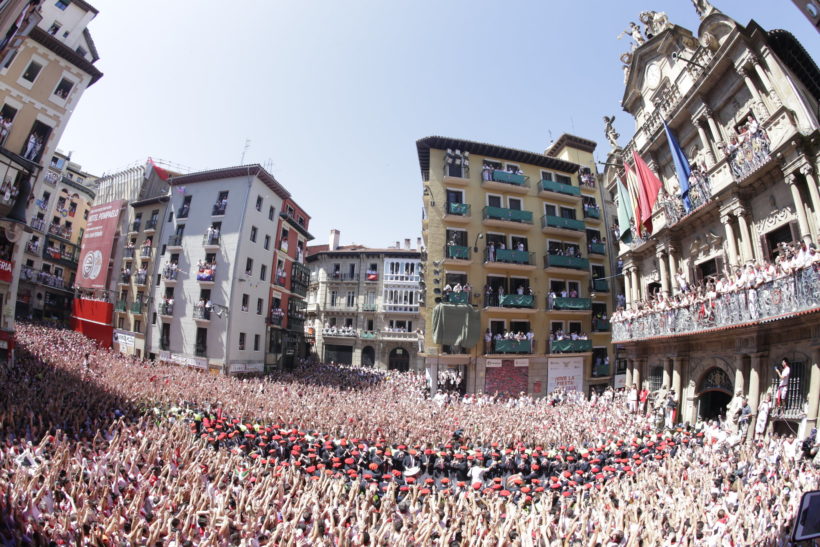 “The essence of pleasure is spontaneity.”

At the end of the encierro in Pamplona the adrenalin’s edge softens and the sense of relief, satisfaction, fulfilment and even disappointment takes its place.  At the same time, amid the Kaiku y cognacs, coffees and conversation, thoughts turn towards breakfast.

There was a time when groups of runners would take the short stroll down Plaza del Castillo, crossing Estafeta and up to Calle de la Merced where they would find a few spare benches outside La Raspa and sit down.  The crowd would vary day to day but ultimately it would be a relaxed affair where a group of friends could eat a simple breakfast, share a few bottles of tinto with gaseosa and chat away in a mood of contented camaraderie.  The odd jota would meanwhile float over from a nearby table. It was always the perfect way to ease into the day and to transition between the drama of the encierro and the rhythm of fiesta.

Now the tables are all reserved: booked up in advance for the “right people” and the impromptu breakfast has been replaced by a stage-managed event.  The very concept of spontaneity has been sacrificed because the breakfast “event” is so popular that everyone wants to join in. Everyone wants a piece of the action and to be seen to be there.  When the essence of a thing vanishes what is left is an artificial facsimile of the original.

We have seen it before in so many ways.  If you have ever dreamed of visiting a famous monument or notoriously beautiful site then you will be aware that the truth does not match the dream.  That amazing view across to Niagra Falls, across the Grand Canyon or up The Mall to Buckingham Palace is not something you can enjoy in the way you imagined.  This is because of the sheer mass of humanity getting in the way of the view. The forest of selfie sticks, or ego poles as someone else has described them, has to be waded through and any photograph has to be captured in that split second when a group of Japanese tourists, British schoolchildren or American coach tour is not right in the optimal place.

Popular sites are popular for a reason – people believe they are worth seeing “in the flesh”.  Their essence is something that is worth enjoying in person. Yet in doing so we end up killing them through popularity.  Pumphrey described it as the “devil’s bargain”, and that experience is greatly diminished not just because it has to be shared with dozens of Antipodean backpackers but because that sense of intimacy, that personal connection, is compromised.

It is very easy to leap up and blame the very modern phenomenon of social media for much of this.  After all the attitude that drives so many of us to share our lives with the rest of the world has found a natural home in the digital age.  Not only that but there is an accompanying theme of the need to prove how amazing our lives are while sharing them with the world. As a result the selfie stick pervades and every visit to a famous monument or site has to be captured as evidence not only that we were there, but that we were having the most amazing time while we were at it.

Yet it wouldn’t be fair to blame this solely on the rise of social media.  As long as humans have been able to travel for leisure and been able to share that experience so the complaints of over-crowding and spoiling have existed.

The famous European Grand Tour was an expected trip for wealthier members of British society, particularly between the 17th and 19th centuries.  Yet even as far back as then there were complaints that the circuit was getting too crowded and too rowdy.  As Professor Kathleen Burke writes; “The undisciplined and sometimes violent behaviour of young Englishmen was often commented upon; certainly, for the staff of British embassies abroad, the activities of English visitors, ‘each vying with the other who should be the wildest and most eccentric’, were a major preoccupation. ‘Even Russians were impressed by the cohorts of wild English youth they found in the cities of western Europe.’”

Hemingway too acknowledged the down side to the popularity of something so beloved.  “Pamplona was rough, as always, overcrowded… I’ve written Pamplona once, and for keeps. It is all there, as it always was, except forty thousand tourists have been added. There were not twenty tourists when I first went there… four decades ago.”

Social media has merely exacerbated this and contributed to it on a global level.  Take a trip to San Sebastián, home of the most wonderful pintxos and tapas, and you will see what popularity has done to this culture.  The principle of tapas, how tapas traditionally works in Spanish towns and cities, has been erased. In its place there is a much more stage-managed, tourist-friendly version where the bars do not want people to pop in for a mini and a single pintxo.  Now they hand you a plate and encourage you to stay long and spend deep in order to keep the cash registers ringing. (This is not to denigrate the gastronomy of San Sebastián, which is outstanding).

This is not how tapas works elsewhere, but San Sebastián has become popular on a mercurial scale.  When this happens a critical mass is reached and something has to give. As Hassan Bougrine points out; “…the essence of the capitalist economy is the need to ‘make money’.”  No wonder that tradition is distorted. Though perhaps some would say that it is actually more positive – an evolution that gives the customers what they want. Given that a high proportion of those present in the Basque city are foreign travellers, that evolution to ‘Tapas Tourism’ is not surprising.

The intense beauty of Cornish fishing villages is such an allure that those with enough income have been buying holiday homes there for many years.  This has had such a negative impact on the communities, effectively destroying the villages outside the holiday seasons, that bans on purchasing second homes now exist in a number of Cornish locations.

The essence of a thing is so fragile, so precious and so difficult to grasp that when we reach for it, it vanishes.  Like grasping a handful of sand on the beach, the tighter we hold on the less we are able to keep a grip on it and the sooner it slips through our fingers and is gone.  We rarely aim to destroy the essence of a thing intentionally, we merely realise that it has happened almost by stealth and the truth of our impact has crept up on us, seemingly out of nowhere.  Yet, destroy the essence of something we most certainly do.

With something fragile and something so desirable the answer, surely, is to handle with care.  We want to reach out and grasp something that shines and yet, like ice crystals, the very touch itself can destroy the thing.  In this case it must be wiser to enjoy a thing in the moment and be prepared to walk away, to change and to sacrifice the very thing we love so as not to destroy it.  This is not easy for, in the moment, we are normally overtaken by the desire to sink ourselves into the experience. Similarly we often destroy one small cut at a time and may not recognise it until it is too late.

Surely as soon as we feel a thing we love is at risk of being stage-managed or that its essence has been compromised or killed by popularity we should be prepared to walk away.  Perhaps we should even be prepared to walk away long before then. Take the post-encierro breakfast as an example. If we attend every single day are we expecting too much from it?  Are we forcing the fun to fulfil an expectation or are we merely contributing to the destruction of its essence. Once something becomes routine it is no longer special.

That is not to say that such things should cease and many people find enjoyment in routine.  Some would even claim that they are able to hold onto the essence of something even when it is a routine.

One of the most common complaints is that the encierro has been destroyed through being too popular.  Complainants point to the crowded streets and the high proliferation of non-Spanish runners (estimated to be 45% in 2017) as contributing factors.  Talk to any “old timer” and they will generally yearn for a time when the streets were quieter, when you had space to run and when you could actually see the bulls.  The essence of the encierro has gone, replaced by backpackers, beginners and wishful thinking.

The evidence does not totally support this view.

The encierro has been popular for a very long time and crowding is most certainly not a modern phenomenon.  Old black and white photographs and even film reels show crowded streets, a crowded Plaza de Toros, pile ups and packed barriers going back many decades – all seemingly without killing off the soul of the encierro.

Additionally, the modern crowding is not getting any worse according to figures released by the Ayuntamiento of Pamplona.  An article published on sanfermin.com highlighted the fact that some years, such as 2012, saw over 20 thousand runners take part across the 8 days, while others much less.  2017 was estimated to have had around 16 thousand runners. Volumes also vary dramatically from day-to-day. It would appear that a patient and determined runner can find space on the right day if he bides his time and takes his chances.

So while it is true that we often smoother the thing we love and destroy its essence, sometimes the thing we love is not actually dead and we just need to look at it slightly differently.  Perhaps, as in San Sebastián, we need to experience it differently and re-learn what the essence now is. Ultimately we need to acknowledge that the essence of a thing is fleeting, transient and that we should enjoy what we can of it while it lasts.