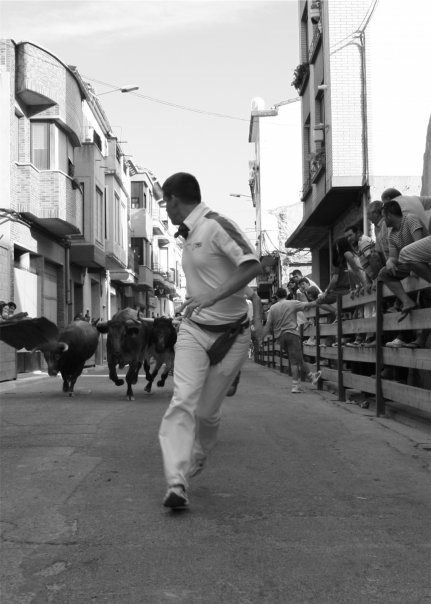 “The art of pleasing is the art of deception”, Luc de Clapiers

I have in my possession a beautiful photograph, taken of me by my wife on a basic digital SLR, running an encierro in Navarra a few years ago. To me the image is so good that it would be very difficult to improve upon it. In the shot I am running down the street, head over my shoulder as the horns of the bulls get closer behind me giving a strong air of danger but also beauty.

The buildings of the town and the wooden barriers all help to frame the moment. There is nobody in the shot – a runner and the animals, an encierro. What makes it more dramatic is the fact that it is shot in black and white, making it atmospheric and moody. If I ran a million encierros I could barely hope for a better picture and even the great Jimmy Hollander has remarked at the quality of that photo.

In fact this is only a part of the story. The picture is not a lie, but is not wholly honest either, and while I love it I am also loathe to make too much of it knowing that it doesn’t convey the entirety of that moment in Funes, Navarra, almost a decade ago.

“Photography has always been capable of manipulation” wrote Joel Stenfield, and he was absolutely correct. There is no Photoshop trickery afoot here. There is no airbrushing out or pasting in. There is no manipulation of the colour, contrast or brightness. The original has been unaltered except for the fact that it has been cropped. This makes all the difference.

In the original, uncropped version, you can see that there are other runners to my left and right making it clear that I was not alone, not the only one in danger. The uncropped version also makes it clear that we were reaching the end of the run and the safety of the barriers was just a few dozen metres away. What is less evident is the actual distance that the bulls were behind us. The camera acts to foreshorten these distances meaning that they were not quite as close as the touching distance that the image suggests. That is not to say that they were not close, but we certainly had a little breathing space. But when it comes down to it, the uncropped version is not nearly as good as the modified one.

“Photography is about finding out what can happen in the frame. When you put four edges around some facts, you change those facts”, Garry Winogrand.

So the beautiful image, cropped from the original is a deception. There is no crime here, but certainly a deception.

There is nothing unusual in this. Since the dawn of photography and even earlier to the origins of portrait art, we humans have sought to frame our experiences and our image in the most flattering way possible. We always want the artist or photographer to “get our good side”. Nobody likes an unflattering picture and is very unlikely to give it any publicity. Take a stroll through social media and this becomes evident – image is everything. The pressure on people to crop their lives on social media in order to portray a perfect life is overwhelming.

This is no different in Pamplona where the encierro, photographed to within an inch of its life, becomes the ultimate stage for ego, and also deception. In the mid to late afternoon after the drama of the run has drifted away into the heat, the photo shops are a hive of activity. In amongst the tourists and curious observers looking at the pictures with wide-eyed wonder, there are also a number of runners desperately seeking that perfect or near-perfect picture proving their worth as a bull runner, proving their worth within this family of aficionados who carry the burden of expectation like a modern day Atlas. To run the encierro as anything other than a novice first-timer is to bear a portion of this expectation. It becomes a need to prove, a need to display evidence, a need to justify and a need to satisfy self-worth. To go to Pamplona, run all week and enjoy it is magnificent, but to come away without evidence of the triumphs is a disaster for many, despite the views of philosophers from Marcus Aurelius to Kipling.

Small wonder that deception creeps in; it has a natural home – a very understandable host to cling to.

Howard Jacobson wrote; “…anyone who cannot bear to look at the reflection of his conscience in the mirror of a crime, has only to smash the mirror to feel innocent.”

Borrowing from this quote we could also say that anybody who cannot bear to accept a bad run has only to change the story to feel better. In this way the second element of deception is employed – manipulating the mental picture rather than the physical one.

“The truth is what I say it is,” said Jacob Kerns and thus, after the encierro, we make our subtle changes; cropping the actual run here and there to cut out the undesirable parts, adding a bit of extra colour to make it more attractive, changing the lens from a fish-eye to a narrow focus. In this way we end up with a more comfortable version and picture that we are happier to share than discard. All the time we forget that there is no crime in having a bad run. We don’t need to reinvent everything. Not every experience has to be portrayed in a positive light.

But we are human.

Ray Mouton, writing in his book “Pamplona”, expressed it as follows:

“It seems exaggerations are the rule, not the exception, among Americans in Pamplona. Many exaggerate the number of times they have been to Pamplona, the number of times they have run with the bulls, as well as bumps, bruises, knicks, scratches, and minor run-ins with a horn. A kind of inexplicable compulsion overcomes some Americans in Pamplona who seize upon fiesta as an opportunity for self-promotion, and writers often act as their shills, making them out to be what they a Hemingwayesque figure is. The tradition may have begun with Hemingway himself who exaggerated in the news dispatches he filed from Pamplona and in letters to friends like Ezra Pound.”

Therefore it is not unusual to hear an encierro story that has been dramatically embellished. It is far from unusual to see that the words of a mozo do not match the images on television, online or in the newspapers. The deception can be incredibly subtle, innocent, or it can be a grotesque lie.

What is the issue here and does it matter? In short it is wrong, and it is cheap to make claims that are not true. In such a noble event as the encierro of Pamplona, runners should maintain their integrity. This is not only for themselves but for the reputation of the encierro as a whole and the community around it. When you lie about your achievements you may get temporary gratification, but no more than this – the rest will be devalued. Which is better, a good runner who exaggerates or an average runner who is honest about their limitations? Social media seems to favour the former, sadly.

“A journalist is supposed to present an unbiased portrait of an event, a view devoid of intimate emotions. This is impossible, of course. The framing of an image, by its very composition, represents a choice. The photographer chooses what to show and what to exclude”, Alexandra Kerry.

Should we not also be unbiased about our own claims?

Before we employ too much righteous indignation, ask who has not done this? Anyone? Ever? Who is not guilty of this even if in some small way? And what is so terrible about the use of slightly more descriptive language when talking about something that is visceral, intense and profoundly personal? Before we condemn let us first remember that it is human nature to exaggerate. Rufus Wainwright talked about making the mundane fabulous and Marina Tsvetaeva wrote:

“A deception that elevates us is dearer than a host of low truths.”

What then is the solution? Do we try to change this or do we accept that humans will always employ deception and there is nothing we can do about it? Ultimately it is down to our own conscience as, when we deceive in the encierro, we are not making any financial gains and we are open to contradiction thanks to media coverage and many other witnesses. When it comes down to it we are only deceiving ourselves.

Meanwhile my own photograph remains in an album, rather than proudly on display.