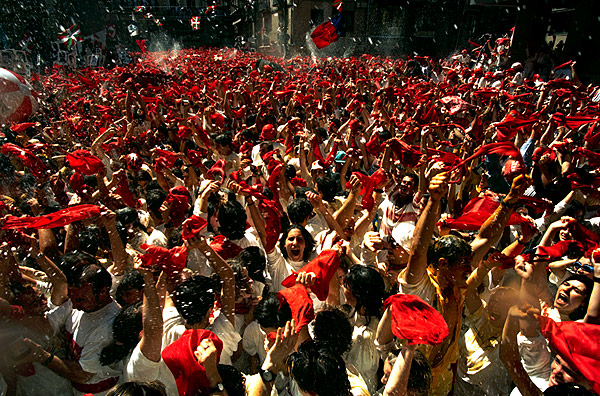 Well, if I’ve survived the party and the resulting hangover, it’s now 2012 and I’m in Holland with some of our peña, (the peña that doesn’t exist)… perhaps just call it The Lost Peña, though we do have another name… Anyway, a new year can mean a new beginning,but it also means, for those of us who love Pamplona and its fiesta, that it’s the real start to the countdown that leads to July and the Fiesta of San Fermin.

Now, as always, the townsfolk of that wonderful town are well ahead of us, as they already have a song to mark the start of the new year and the inexorable march towards July and armageddon. Sorry, fiesta. It’s called the Escalera, and I’m sure most of you know it, but for those who have never heard it.

The meaning of the first part is fairly obvious, but the second part maybe not so. All it means is “To Pamplona we have to go, with a stocking, with a stocking. To Pamplona we have to go, with a stocking and a sock”. No, I have no idea what the sock and stocking bit is about, or if it has some other hidden meaning, (actually, with some of our lot, it does!). Well, have you ever had to use those plastic portaloos in an emergency? Anyway, I have asked and been told there is no other secret significance, though my guess is the writer had been on the patxaran over the new year… 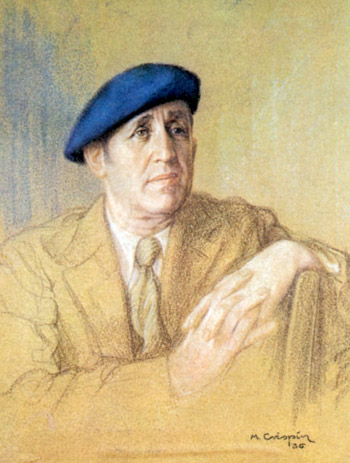 It’s a simple song with simple words, written by an extraordinary man. His name was Ignacio Baleztena Azcarate, and he was born in 1887 and died on the second of April, 1972. He was many things in his lifetime. A lawyer, writer, politician and Carlist. But he was also a Navarran, and immersed into the language and folklore not just of the region, but of the Basque Country. He wrote many things throughout his lifetime, writing for not just the present day Diario de Navarra but for other newspapers and publications now long defunct.

But he also wrote poetry, and stories…and songs and music. Along with the “Riau-Riau”, probably his other most widely known and sung song, the Escalera continues to be popular today, nearly a hundred years after it was written. On his excellent website, http://premindeiruna.blogspot.com, his son Javier has a mountain of information about his father, from which I have gathered most of the material for this piece. I don’t think I’ve made any mistakes, but my apologies if my translation is a bit wonky at any point.

He took popular melodies from the mountains, many written by one Silvano Cervantes, and adapted them to fit his words, and a century later we are still singing and dancing along to them. This is also the case for the Riau-Riau, which almost certainly first happened in 1911 after a more or less spontaneous act by Ignacio and his friends. Twenty years later, he was to form the peña Muthiko Alaiak, still in existence and the second oldest in Pamplona after the peña La Unica. For the centenary during last years San Fermin, the peña commemorated the 100th anniversary of the Riau – Riau on their banner.

One more thing before moving on and finishing. In 1912 during fiesta, it appeared that two Englishmen had taken part in the encierro. Yup, it’s that man again, and a friend of his. For one of the bullruns they decided to dress up as colonial Englishmen. Baleztena dressed up in morning coat and breeches, large sideburns, wearing a hat and enormous glasses, and carrying a large camera and tripod, made out of cardboard but very authentic looking, while his friend Emilio Malumbres dressed as an Andulucian, (maybe that’s what they thought some Englishmen looked like, I’m not too sure!), carrying a suitcase.

It appears that even in those days that kind of thing was frowned upon in the bull run, and they had to hide from the chief of police, de Reta, in the Hotel Maissonave, back in the day when it was situated on the run. They did the “valientes” run, and took off with the early runners and made it inside the ring, to general amusement all round, whereupon his friend put down his suitcase and Baleztena set up his “camera”, in the middle of the ring to even greater laughter. They must have looked quite a sight, especially as Baleztena was tall and slim, while his friend was short and chubby.

There, with typical British “phlegm”, as he later described it, Baleztena proceeded to “film” the bullrunners while his great friend stood around “directing”, to even greater hilarity. At the last possible moment they abandoned their props and ran to the side and vaulted over the barrier.Their escapade was talked about for years in Pamplona, not suprisingly. Fifty years later, an article appeared in Diario de Navarra remembering the day.

Which I suppose brings me nicely to the bull run, and closing time. Ah yes, the bull run. Whether you do the run or not, even here his influence still lingers. If you have ever danced to the “Dianas” with the town hall band, either after a hard nights partying or for a morning warm and wake up, you’ll have danced to a few of his tunes. An hour or so later, it’s bull run time, and if you have done it once or a hundred times, there is nothing more I can say. But if you haven’t, and are thinking about going this year and running for the first time, I can’t do much better than direct you to the runner Bill Hillman and his excellent article and interview with the great Julen Madina, at: http://www.thebutchersblog.wordpress.com/julen-madina-complete-interview

And you’ll find the video, too. Ouch. Madina has retired now, for the very best of reasons, but of all the things he says in the article, one still sticks with me. It’s that whenever he hears of or sees the run, it makes him cry, no doubt because of the sheer emotion of having to give it up. And this from one of the greatest and toughest runners of all time.