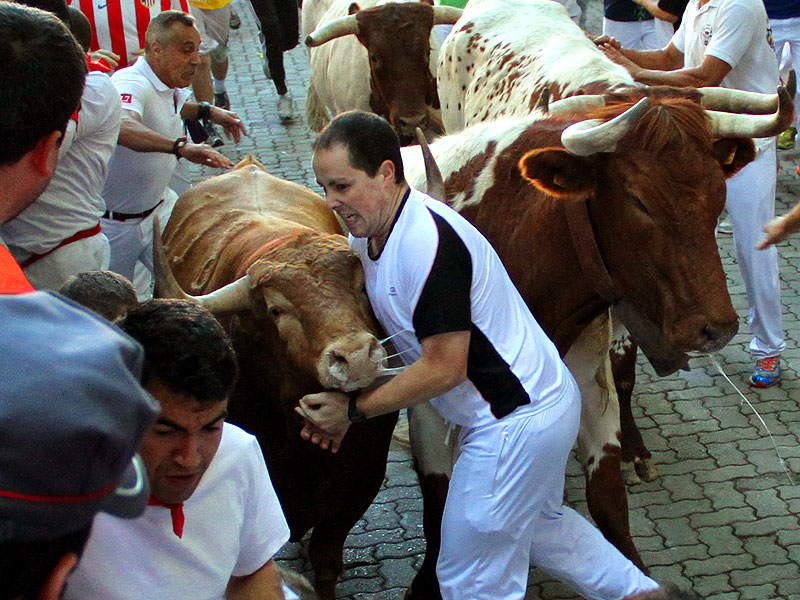 The Board of the Pamplona Running of the Bulls met recently to evaluate the outcome of the 2013 Running of the Bulls and to listen to proposals and opinions from all those who go to make up the board members. This board has some specific weight as can be seen from the kind of participants which included the Mayor of Pamplona, Enrique Maya. In any case, this is not a legislative entity as this is, in fact, constituted by the Junta de Seguridad, under the authority of City Hall. This latter entity decides on the steps to be taken with regard to safety rules and regulations and any possible decrees issued by City Hall for Sanfermin 2014. So, yesterday’s meeting was called in order to listen to suggestions and proposals rather than pass any actual laws. However,   Pamplona City Hall has announced after this meeting that it “is going to propose modifications in the decree about civil behavior in order to include a specific fining system for rash conduct made by runners during the Runnings of the Bulls. See full communication.

The most-discussed proposal made at the meeting came from the  Pamplona Peña Clubs Federation when they raised the general question of making an analysis of the present situation of the Runnings of the Bulls and proposed some ideas for its improvement. Download the full proposal here. Their analysis highlights the fact that this event is just one more of several events which are afflicted by “problems of overcrowding and the loss of respect and appreciation of the event on the part of many of the participants.” From the point of view of the Federation of Peñas, the ideal situation would allow for a natural voluntary and spontaneous participation with no limitations on the number of participants.  They would also shun any idea of having commercial exploitation made of the event and furthermore, they expressed the need to make the young local population more aware of the tradition behind the runnings in order to make them more attractive to the new emerging generations.  In addition, the Peñas Federation made the proposal to deal with some of the supplementary problems around the running of the bulls such as lack of information and awareness of the nature of the running of the bulls and  the question of safety along the course and the need to impose penalties for rash behavior and violations of the norms.

As a response to this situation the Peñas propose solving the problem of the lack of information by installing information screens and panels and by spreading the municipal norms with handouts in hotels and camping sites. In addition, they feel that it would be a good idea set up an information campaign to increase awareness in the media and in specialized travel magazines as well as in cities with a taurino culture about the authentic values inherent in the Running of the Bulls. With regard to the media, they also highlight the fact that in their opinion the media is not doing favors to the event with their reports at present. They proposal increasing the element of anonymity in the running of the bulls and that further meetings should be held to discuss these questions. They would particularly like to see the media reprove rash behavior among runners rather than praise it as they often do at present.

As regards the procedures of the Running of the Bulls, the Peñas point out that if an “early” warning rocket was sent off some three minutes before the actual start of the running, this could improve the concentration and awareness among the runners about what they are facing in the running of the bulls.  Furthermore, they suggest that the young novice bulls should be released later so as to avoid those who freely enter through the bullring entrance, getting free access to the event. At the same time, they proposal limiting the presence of photographers, first-aid workers and police at the fencing to allow the runners easier access to make an escape at the fencing, if this is needed. Finally, they expressed their concern at the dearth of young local people prepared to participate in the Running of the Bulls and they also feel that all the runners, be they well-known or not, should be eligible for penalty and censure in the case of any possible infractions on their part.