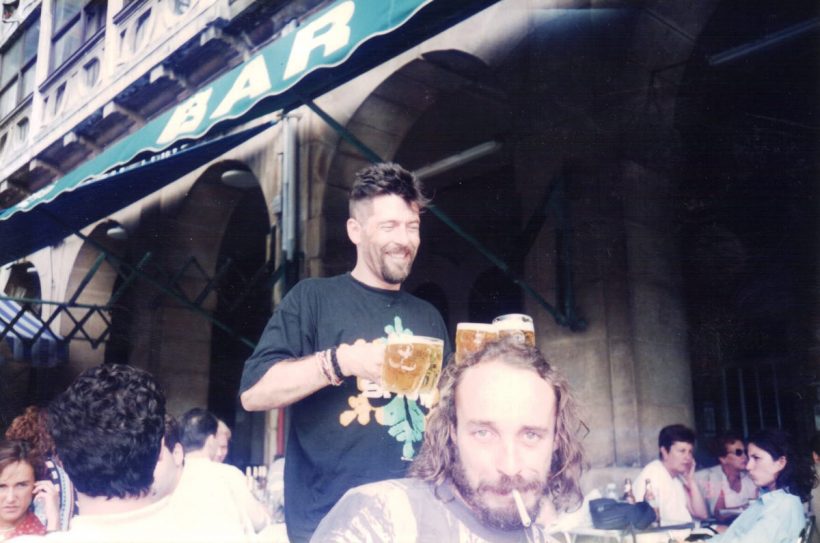 Pamplona during San Fermin fills up with an extraordinary and eclectic mix of characters. Quite literally, the good, the bad, and the ugly. The good are many. Pamplonicans, us, you….but there are also the bad, and the ugly. And the arses. I’m not going to say who these bad, ugly arses are or where they are from, but if you’ve been a few times before, or even just the once, you’ll know exactly who they are. Let’s just call them the Stoolies. They’re from Stoolieland.

But some things have really changed since I first came, nearly 30 years ago. The main difference is that the town is cleaner. Cleaner because the toilets work better, last longer and there are more of them. Or maybe there are just more plumbers. And cleaner also because the town hall provides hundreds of those design classics, the portaloo. (And it is a design classic, it’s just that some of the animals that use them aren’t toilet trained). So at 4 o’clock on a sunday morning, when the infrastructure of the city is close to collapse, and you’re touching cloth, one of fiestas many delights when you need a dump is the appearance of one of those lovely molded coffins, and you get to enter a world of chemicalised plastic, coated in piss and poo, while standing in a toxic lake of gawd knows what. Oh, and tip number one: always, always, buy a copy of the local paper at midnight (or always make sure you’re wearing socks)…what, you think these town hall freebies have toilet paper?

Because unless you can find one of those Stoolies to crap on, (and I believe it’s still legal during fiesta thanks to an ancient by-law…trust me!), it’s to those heavenly plastic dream coffins you will go. Eat your heart out, Ikea.

But with cleanliness comes, sometimes, sterility, and this extraordinary city has lost one thing that defined fiesta the first few years my friends and I came. The gypsies, punks and thieves. Okay, they are all still around, although there are a lot less of them, but there was a song once, and the title just reads better like this.

When we first came we lived, danced, drank, ate and slept in the square. And so did the gypsies, punks and thieves. There were thousands of them, and they were everywhere. And their dogs! You may think you see a lot of them now, especially if you walk down Navarreria (Mussel Bar) street, but believe me, that is nothing compared to when I first came. (And what must it have been like in the ’50’s, and ’20’s, and…god, how I’d love to be able to travel back in time.).

San Fermin is, of course, one of the great Spanish fiestas, and over centuries any town in fiesta has attracted the travellers, the itinerants, the curious, the street performers, the professionals, and, of course, the gypsies. And over the last 30 years or so, the punkies, as the Spanish call them. And always, always, the thieves.

Knowing nothing in 1984, our first year, we just wandered into the square (it was only a couple of hours after the chupinazo, and we didn’t know about that, either), and found a patch of grass to plonk our stuff down and make our own, and to make our home. Well, it became our house for the next 9 days (and still is, because although we rent flats now, for some of us, it’ll always be our spiritual home in Pamplona). All around us were locals, young and old, tourists and travellers, mostly young, and the gypsies and the punkies and their doggies.

Obviously, with all groups, there are good and bad, and most people are good, and gypsies etc, aren’t any different. One of the amazing things about Pamplona is that despite a million drunks passing through the town during fiesta, there is very little trouble. And if there is, it’s probably caused by those “Stoolies”. Trust me, most of them are, well, the human version of one of those plastic port-a-loos. When it’s overflowing…Give me the gypsies and punks anyday, but I’d love to get rid of the Stoolies.

So we lived amongst these people in the square for the first couple of years, and living fiesta in the street is a heck of a way to experience San Fermin. The only trouble we ever had was the 3rd year (that’s one incident, that lasted a few minutes, out of, up to now, over the years, 243 days of fiesta). Not bad. We had learnt by then that the gypsies, travellers, tramps, whatever would wander around and around the square, and stop and say “eh, por favor, un trago?” “hey, can I have a sip please?” and we always had what we called our “guest” bottle just for them, usually a litre bottle of beer with about 3 inches left in it, or the same with a bottle of wine. And they’d take a sip or two, say gracias, and move on. And around and around the square they’d go.

One time though, we didn’t have a guest bottle, just a nice fresh, cold litre of beer. This character asked for a sip, and a friend called James passed it to this guy, and he drank, and drank, ignoring the “hey, hey” as we asked him to stop. So James just took the bottle back. And some spilt down his front. He mouthed off something in Spanish, we shrugged, he left. But I kept my eye on him as he crossed to the other corner and started talking to a bunch of people, pointing our way. Then watched as about 30 punks and gypsies got up and headed towards us.

“Guys” I said, “we may have a problem”. I think there were just 5 or 6 of us sitting there that afternoon.They all came over, and we stayed seated. (A bloody good idea in retrospect). One of them, a punk, looked at us and said in English, “Hey, you, my fren’ here he say you speel dreenk on heem”. (No, he wasn’t Mexican, it just sounds like it). We tried to explain how it actually was but they weren’t having it, and it was obvious what was going to happen. A crowd had gathered now, just waiting to see the outcome. The gypsypunks were beginning to lose it big time, so we stood up. If there was going to be a slaughter (and we seemed to have morphed into lambs) then at least we’d be on our feet.

Just then, out of the crowd stepped two of your typical, big, bearded Basques, asked what was going on, believed us rather than them, and tore in (verbally) to this group. Now most of these characters know that whatever fiesta they are at, once the locals are against them, they don’t stand a chance, so they mouthed whatever, and left. We said thanks and gracias and eskerrik asko, and that was that.

About half an hour later, coming back from the beer shop, I saw a big crowd in a circle, watching something. In the middle were our two saviours, and the one original gypodicko who had tried to neck our beer. There was a big argument going on, and it was obvious one of the Basques (who had something in his hand) was just telling this guy to go. And go he eventually did, but just as he reached the edge of the crowd, who had began to part, he turned around and shouted to the Basque the classic Spanish insults of “Your a son of bitch and your mothers a whore” or something similar, but before he could finish, the Basque guys’ hand went up and he threw, hard, and at head height, whatever it was he had in his hand.

Now if he’d missed it could easily have hit, and hurt, anyone of the crowd who was watching. But it didn’t miss and this big set of keys went flying through the air (jingle jingle), and hit him smackbangwallop in the middle of the forehead. Thwock!jingle. Blood spouted and he went down.

Ole’! The crowd looked stunned, then burst into a round of applause. As did I. Shitfuck!

As I said at the beginning, Pamplona is full of all sorts, just like anywhere. But “anywhere” doesn’t have 204 hours of fiesta over 9 days, so things can get a little lively. From those rich enough to be drinking all the time at the terrace bars, to those who spend most of their time at street level, generally everyone is okay.

Except the Stoolies, of course.

Because our group, although smaller in those days was even then pretty varied, we got to know a few of those people that spent the whole fiesta out on the street. One of the best feeds I ever had back then was sitting with some gypsies after the bullfight, back in the square, feasting on all the left over food and drink from the bull ring. And remember, this is food prepared at home to eat in the ring after the 3rd of 6 bulls is killed, but has been left untouched. It’s probably made by mama (honestly), and is delicious. And washed down with fine red wines, chilled whites, vodka and lemon mix, proper sangria…all left in the ring…well, like I said, a feast.

Maybe it was during one of these picnics with the streetnics, I don’t remember, but an English guy appeared on the scene in the late 80’s (I think), Jimmy Dave, who spent his fiesta on the street with these guys, and perhaps through him I met another one, also English. I don’t quite know his story (his brother, Captain Coma, still goes and knows, of course), but he seemed to have been there a while, spoke Spanish, and sometimes lived the life of a travelling punkie. His name was Bolton John, and he seemed like a nice bloke, and we saw him every year with a crowd of gypsies, punks, hippies, etc, living the fiesta outside, in the street.

Well, it’s gotta be pretty tough and pretty rough sometimes, I guess, but none of us who ever met him, or saw his spectacular, um…(crash)landing…as he arrived at our vodka party, have ever forgotten him. (Who ever would have thought a childs bicycle could go that fast?!). Some people live a different life, and then crash and burn. Well, some others (to quote Jack Kerouac) “burn, burn, burn, like a fabulous roman candle”, and I guess that’s what he did. But the crash, when it came, was hard, and it saw the flame flicker, and fade, and then go out, in September 1997.

So if you see some people who are a little different to you on your wanderings around Pamplona, the chances are they are probably pretty okay. And remember, of course, that there but for the grace of God…