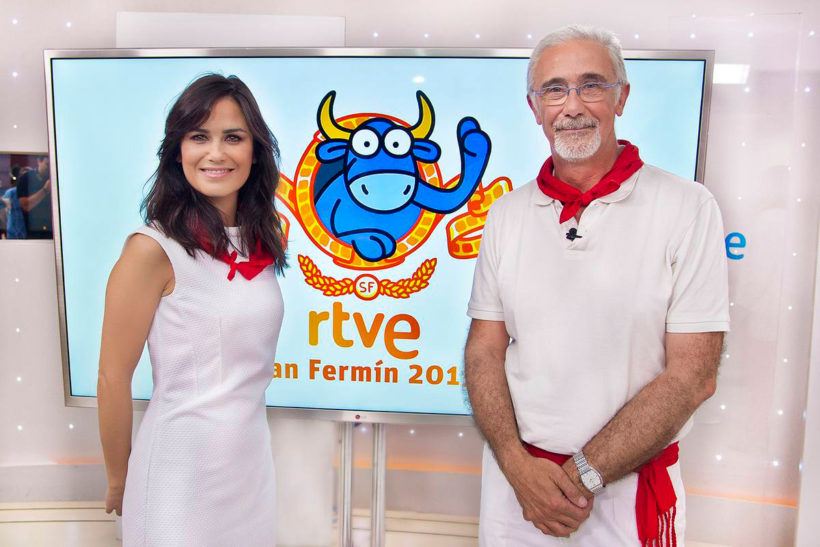 Televisión Española  (Spanish State Television) returns to Sanfermin fiestas yet again this year, thanks to the large audience response achieved down the years and to the quality of the spectacle as well as the international response in the transmission of the Running of the Bulls. From the h 6th to the 14th of July there will be special daily programs broadcast. The 2014 Running of the Bulls saw the second highest audience share in the history of the broadcasts (the highest ever figures were achieved in 2010). According to a statement issued by RTVE they had an average of  “1.741.000 viewers and a 73. 6% share between the first channel and their 24 Hour news channel. More than 4,6 million viewers watched at least some part of the running of the bulls broadcasts on TVE.”

Furthermore, Kukuxumusu will once again be responsible for the cartoon figures used to market the Sanfermin programming on TVE and will design the graphic elements to be used in the RTVE special broadcast programs for  Sanfermin both for the Chupinazo opening event and for the daily bullrunnings.

Besides, the quality response shown by RTVE is endorsed by their use of a High Quality Transmission, with 25 different cameras being used for the daily broadcasting of the Running of the Bulls. One of the cameras will have  a zip-line prop to provide a bird’s eye view of the bullrunning. There will be a total professional staff of more than eighty people employed to broadcast the Pamplona Running of the Bulls.

The signal which will be used by the TVE 1, the 24 hours Channel, The  Internacional Channel and the web page rtve.es has been taken up by Esquire Network as the source for its retransmissions for The United States and for all the channels that will use this supplier. The famous Men in Blazers will be the anchormen that present the Running of the Bulls live.

In the press launch this morning both Elena Sánchez and Javier Solano spoke about the work they hope to achieve during Sanfermin. Elena Sánchez wished to emphasize the capacity of the RTVE national channel for its ability to broadcast live events and underlined the fact that there will be five live points that will be active throughout the broadcasting of the Running of the Bulls for RTVE. He went on to say that the Running of the Bulls event is now “more crowded, more difficult to run well, but not necessarily more dangerous”. Here he is: