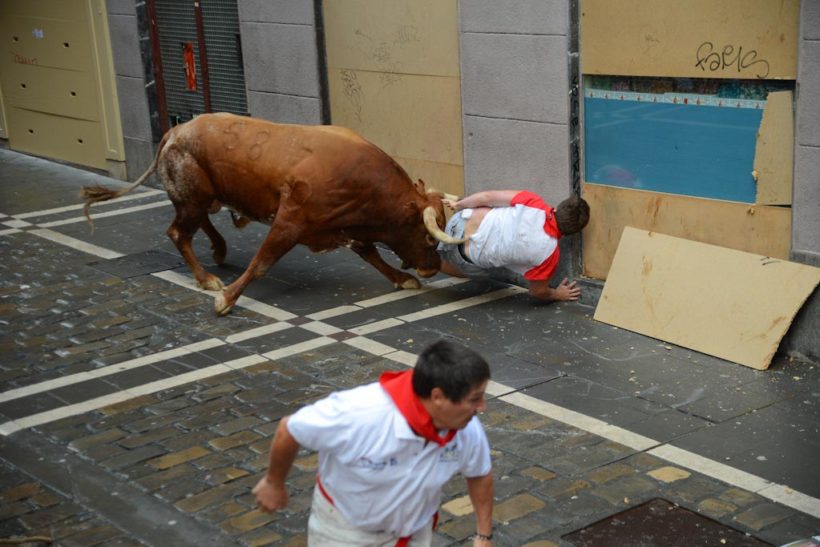 This morning, the Miura Bulls featured in a tension-filled Running of the Bulls, due to the fact that one of the bulls got left behind and neither the bull-minders nor the runners found it easy to convince the bewildered bull to run ahead towards the bullring. This morning’s bullrunning lasted 4 min. 57 sec. due to this mishap with the last bull.

The Miura bull-breed came out of the pens in a tight formation tucked in behind the leading bell-oxen. They stayed together until they reached the corner of Mercaderes and did not attempt to charge the runners as some of the other bull-breeds have done in this year’s Runnings of the Bulls. However, at this corner, one of the bulls slipped up and became separated from the rest of the group, creating some real danger. One young runner was quickly charged and gored by this loose bull and even when the runner tried to escape by heading back towards Mercaderes, the bull chased him and continued to charge and toss him with its horns. The runner is believed to have suffered some serious gorings.

As the rest of the group of bell-oxen and bulls were entering the bullring, this loose bull continued to stay stuck in Estafeta and was showing clear signs of total disorientation, turning continuously. The bull-minders made several attempts to try to move the bull in the direction of the bullring, without much success. Fortunately, the arrival of the two “sweeper-up” bell-oxen meant that the bull instinctively followed meekly behind these two animals and was led safely into the bullring and away to the pens.

MORE INFO AND PICTURES OF 14TH JULY RUNNING OF THE BULLS.

DRAMATIC IMAGES AT THE CORNER

GORINGS OF TODAY RUNNING OF THE BULLS