These upcoming pages of The San Fermin Echo were first published in short form in the daily Navarran newspaper, ‘Diario de Navarra’ and in a longer version on their digital pages, every day from the 5th to the 15th. They’ve been changed a bit from the original as it’s now post-fiesta, but as San Fermin for me doesn’t begin to fade until a couple of months after it’s all over, we thought it would be nice to repeat and re-live those heady days of San Fermin 2014. We’ll probably put out two a week, so this first one has the day before fiesta, the 5th of July, and immediately following below it the one of 6th, when the craziness began. Fiesta is over now, but remember…¡ya falta menos!

The day of days has arrived. Is there anywhere else on this beautiful Planet Earth you’d rather be than in Pamplona, Navarra, on July 6th? I thought not. They talk about the Big Bang starting everything off a few billion years ago, but I reckon the universe gets a huge re-boot every year on this day at noon in front of the Ayuntamiento, the Town Hall. When that rocket goes off and you hear that avalanche of humanity cheering and roaring, well, if there is alien life out there somewhere I reckon they’re jealous.

If you’ve never been before then try and get yourself down to the town hall for the official start at midday, the Chupinazo, because the lead up to the rocket that’s fired from the balcony bang on 12, (usually!) is a must. I promise you that you’ll never, ever forget it. And if you have been before, well, you already know…the Chupinazo is a fantastic explosion of unbridled joy. Not everyone can fit in as the plaza is small, but they have rockets going off in a couple of other places and also, let’s face it, just to be in Pamplona on this day, wherever you are, is heaven itself.

And once that rocket explodes something amazing happens. If it’s your first time then this is the point at which your life could change forever. It’s impossible to put into words what the Fiesta of San Fermin is like, but if you’re one of those whose first time turns into an every time, then you might well spend the next decades trying to. Something inexplicable happens to some of us in fiesta and it is magical and wonderful and maybe proof there is a God. Or Devil. Or both…but perhaps for 9 days in Navarra they have a truce and this is what happens…Felices fiestas everybody!

At one point or another most people will stop and have a drink in the square, be it at the terrace bars or sitting on the grassy surrounds or on the square itself. At the very least it will be walked through. Or most probably danced. It is the Old Town’s centre piece of course, if not the centre of the original old town, and could thus be thought of as not just the nerve centre of the town, but of fiesta itself. If in the old days all roads led to Rome, then perhaps during San Fermin all roads lead out from the square.

And whichever way you head out of the plaza, you’ll at the very least have to pass a bar. There is only one exception to this, and that’s if you leave by the Paseo de Sarasate…and that has bars. Within that square during fiesta you’ll see just about everything. From one day’s end to the start of another at midnight, the square lives and breathes fiesta.

From the live bands that come on at 12.00 am turning the old place into a dance floor, (how can those of us who were there ever forget 2008, when Chuck Berry played live?) to what’s called Fiesta’s Alarm Clock, that wonderful “get-out-of-bed!” or the “don’t-fall-asleep-yet-but-wake-up!” music of Las Dianas, tunes played by the Town Hall’s official brass band, La Pamplonesa, (95 years young this year) that will have even the most tired of people up and dancing, the old square is at the very heart of San Fermin.

The Dianas don’t always pass through the square as their route varies, but when they do and if you’re asleep at a bar or on the grass, I swear they’re the world’s greatest waker-upper. Then of course there are the street musicians and other bands that keep the place rocking throughout the day, while all the time the terrace bars add that vibrant hubbub around the edges.

And as a coup-de-grace while the sun is setting, you’ll always get a couple of the Peñas and their Charanga bands passing through at night on their way from the bullfight to their clubhouse. If the square, by tradition and design, is fiesta’s beating centre, and I swear it’s alive sometimes, then the peñas are its heart pumping, pulsating lifeblood. 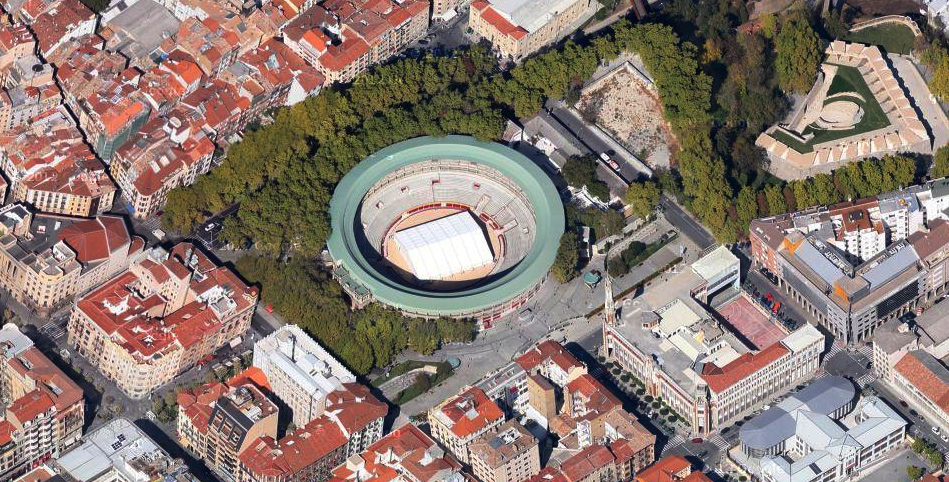 From one plaza to another. It’s only a short walk, or indeed run, between the two, and they are very much connected and part of Pamplona’s taurine history. Let’s start with the present ring and take a stroll back in time.

The one we have now was opened in 1922 and inaugurated on July 7th. The very first human pile-up at the new ring was also formed on that day, the first run of the fiesta, right at the entrance to the sand. About 100 people were involved but luckily, and amazingly, no one appears to have been too badly hurt. It had a capacity of nearly 14,000 then until another top tier was added for 1967 bringing it to over 19,000.

But before they built the present one, the ring it replaced was in a different location. It was very close by…just imagine coming out of the Estafeta and turning sharp right instead of gently left. That old bull ring had been there since 1852, but it was getting a bit long in the horn…and they needed something with a bigger capacity. A big fire – some believe it was arson – in August 1921, didn’t help either.

Before that, the city’s very first constructed bull ring had been started in 1843 and was ready for the next year’s fiesta. It was in the same place as the one that was to replace it. It lasted till 1849 and had the grand capacity of 900, but due to its feeble construction and frailty, they had to demolish and replace it. For the three years while they were waiting, they made a temporary one in the Plaza de Vinculo, which if you wander past the post office on Paseo Sarasate, and turn left, is that wee plaza there on the right. Where once were bulls above ground there are now cars below, as these days there is an underground car park.

Remember, all this was outside town. There was nothing except fields and farms and countryside. And before these rings were built, in common with most Spanish towns that didn’t have a ring, they used the main square, as shown in this rather nice French painting from 1829. 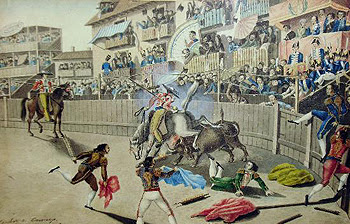 The painting “Combat de Taureaux a Pampelune.” 1829. I cannot for the life of me find out who painted it.

Fiesta or Feria Tale of the Day

Yesterday I wrote about the double encierros, caused when bulls either returned to the corral or never actually left it, so that once the other bulls were safely ensconced in their pens in the bull ring, the rest of the herd had to be run back down the course to the beginning…and started again with the stragglers. Run number two was on!

But this caused problems, because we are talking about the 19th Century here and the first quarter of the 20th. In those days things weren’t quite as organised as they are today, and sometimes confusion reigned. The run began at 6, without any form of notice. If you didn’t know…well, just imagine! It was for this reason that in 1892 the encierro was started with a rocket, so everyone could hear. Later on another rocket was fired announcing the end of the run from the Plaza de Toros.

But that didn’t solve the problem of how to let people know that there were still animals left who hadn’t yet run, or had returned from whence they’d come while the run was still on. After all, shops had to be opened and it was no good having the streets returning to normal and then finding out there was another run yet to come.

So after 1927, and July 7th the day of what was to be the last double encierro, a second rocket was fired once all the bulls were deemed to be safely out and away from the corrals. Also a third rocket was introduced informing everyone that all the bulls were safely inside the ring, and finally a last one to let everyone know the animals were safe and secure in their pens.

Escape of the Day

Ah, yes, the Escape of the Day, for when fiesta gets just too much and you need some peace and quiet. Well, um, sorry, and I don’t know how to tell you this, but it’s July 6th and the first day of fiesta, and there is no escape. After all, what did you come for?

However, there are sanctuaries, and if you really are in need of some peace and quiet but find it impossible to leave the city, then try this: for true peace from the pounding of the fiesta, for real respite from the raging outside, and for safe San Fermin sanctuary, try a church, any church, for a little while. You can even go to where San Fermin lives, his house, the Church of San Lorenzo. Just don’t go in drunk, please.

If things are that bad, and assuming you haven’t come out with a wallet or money bag full of, well, money, and travel tickets, and credit cards and Passport, (people do you know, honestly) then just find a spot somewhere and snatch a snooze.