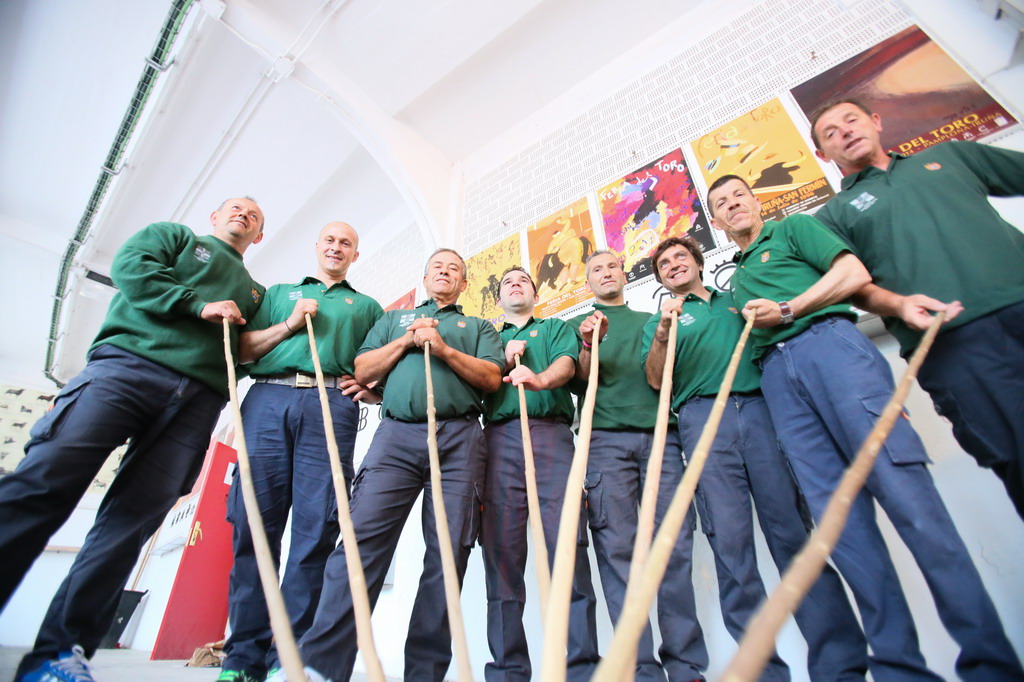 At six o’clock in the morning, the day begins for the bull-minders. This group form the true guardians of the Running of the Bulls. They are the people who are responsible for making sure that the Bulls reach their destination in the pens in the bullring after they are released from the pens in Santo Domingo. Their task entails a real sense of responsibility: to watch for the Bulls on the course, anticipate their movements, direct and lead the bulls forward if they stop or stall. Their work is vital in keeping down the number of gorings. But, as they are only humans, they cannot always succeed in their efforts.

The bull-minders form an authentic close group: eleven men (women have never formed part of this group) who are all in excellent physical shape and who never fail to turn up morning after morning. Should they feel indisposed or ill, they take some medicine or other to alleviate things and come to their posts. Each 100 meters they take charge of a particular stretch of the 850 meter course almost like relay runners in a normal race would do.

This team is responsible for all the different stages of minding the bovine breeds throughout the day: at the Running of the Bulls… where the young frisky steers are released in the bullring… at the afternoon bullfights when the meat is cut up… at the late night encierrillo when the bulls are brought up to the pens in Santo Domingo… from 6 in the early morning to 10.30 at night. They take over from the mayorales, ranch-hands who take care of their own bull-breeds, until it is time to hand them over to the bull-minders.
Every evening, during Sanfermin fiestas, at about 10.00 p.m. all eleven go down to the pens at Corrales del Gas, the ‘hotel’ where the Bulls are spending their final days of life and they bring them up to the small pens in Santo Domingo in readiness for the following morning when the bulls will be released onto the streets to make their way to the bullring. This particular event is carried out in sepulchral silence, almost without light, when the bulls are brought up through the streets to the pens. This event is commonly called the encierrillo; (‘the Little running’). This is a ritual repeated each day and only followed by a few hundred watchers who line the route in respectful silence. One of those magic moments of the Sanfermin fiestas. 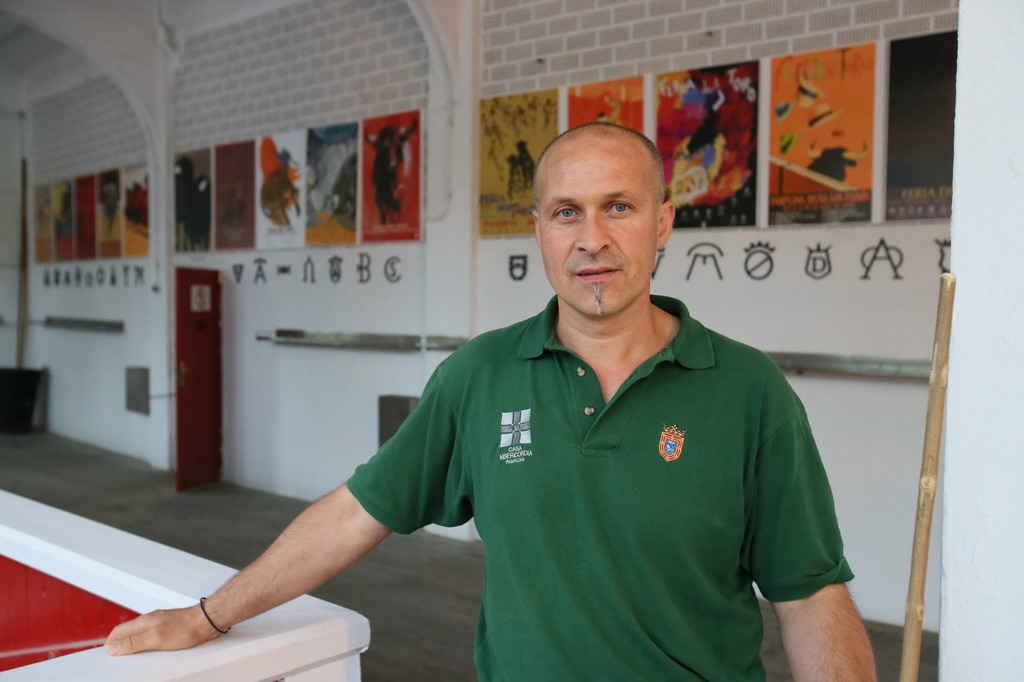 Fran Itarte celebrates his 31st edition of working as a bull-minder, the second-longest member of this curious group. His blue eyes light up when he tries to explain what he feels deep inside in the heart of the fiestas. He began running himself, when he was just 15 years old and at the early age of 18 he was signed up as a bull-minder. On his very first day he put on a new pair of sneakers and he arrived a little late. The municipal policemen were almost going to refuse him entry to the course. He was born in Peralta, a town located in the south of Navarra, but he has been living in Pamplona for a very long time now. He manages a fish shop in which he also reveals his charm and good humor.

Just like any other day, after the Running of the Bulls, all eleven get together with some family members and friends and have some brunch in the Chez Belagua café in Estafeta. Their hosts treat some royally. Here they can relax again after all the tension generated by the bullrunning event. It’s here that I meet up with Fran to have a chat and try to probe that passion for the bulls which fires these men so much.

¿Have you ever dreamed of bulls?
Quite often, but precisely last night I was dreaming all night about the Running of the Bulls. I was shouting at some runners “get down into the sewers; the bulls are going to pass over them”.

What did you think of today’s bull-breed, The Torrestrella?
This is a bull-ranch that I like a lot and today there were three of them that I was charmed by. They had white skin and black lines running all across them. They are called “burracos” because in Andalucía there are birds called like that and which have just those same colors. Perhaps the word comes from “urraca” (magpie). Although I must say, my favorite-looking bulls are the salineros, (‘spotted’) with a white skin base with red lines running through them, as if a bucket of red Paint had been thrown over them.

At what time did you go to bed last night?
We usually have dinner together and we then head off early to bed for a timely sleep.

And what if you get sick some day?
Impossible, we cannot miss any. We have taken part in the bullrunning with all kinds of ailments and wounds. Nolotil medicines have saved us on many occasions.

Your uniform is a green polo shirt and a pair of blue trousers. What does the green stand for?
I usually say we are dressed like gardeners, like the workers from City Hall. They did not put too much thought into it when it came to deciding on our outfits.

You know a lot about the Bulls, I imagine. How can they move so fast when they are so big and heavy?
The movements of the bulls when it is relaxed seem slow and awkward, because they are making as little effort as possible. But when it comes to the vital moment, they are electrical, explosive; they reach a 100 in a matter of seconds. Besides, the pure fighting bull breed has improved genetically, which is giving them more potential.

At a short distance, how wide are its horns?
They could measure 80 cm. or more, but the feeling is that they are bigger because of the form of the whole animal. I know a girl, a vet, from the University of Leon who is working on a Ph.D. thesis about the horns of the Bulls. She takes measures from all sorts of angles!

And what does it feel like to touch a horn?
On touching them, you feel that you are just a worthless thing; you feel such a sense of impotence. And when they catch you with their horns you feel ridiculous, as if you got an enormous thump. I have been gored a few times, I can speak from experience. However, the morphology of the horn means that when the tip of the horn penetrates the body it extracts the tissues and what is most damaged is the flesh itself. That was explained to me by the head surgeon who worked in the bullring infirmary in Jerez de la Frontera, in Cádiz.

How does the skin of the bull feel to the touch?
Hard, like leather, beautiful.

Doesn’t it pain you to see the Bulls that you run with, die in the afternoon? Sure it does, it pains us the bull-minders, and it pains the bull-ranchers and it pains all those who work close to the bull. Because all of us are very fond of the fighting bull.

The Miura are surrounded by a certain mystic. Does that coincide with the reality?
It certainly does. This is the most distinctive and rare bull-breed of them all. Their behavior is sociable. They like to stay together. But, if they do get something into their heads, you’ll never change them. For example, if they decide that they do not want to come out of the pens, you can be waiting the rest of the day there, for they will not come out. One of them once jumped over a three-meter fence and got boxed in and stuck in a gap hole. They tend to have atypical reactions and that is where their danger lies. They come from a breed which has been brought up in the fields for the past 170 years or more. I would say that they live in the wilds. 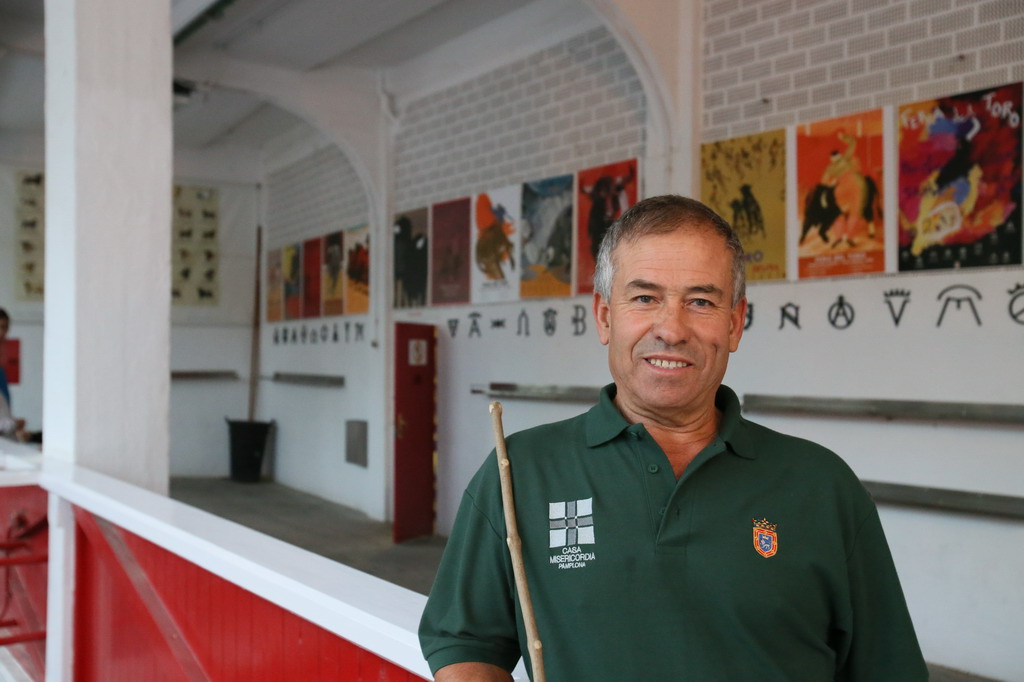