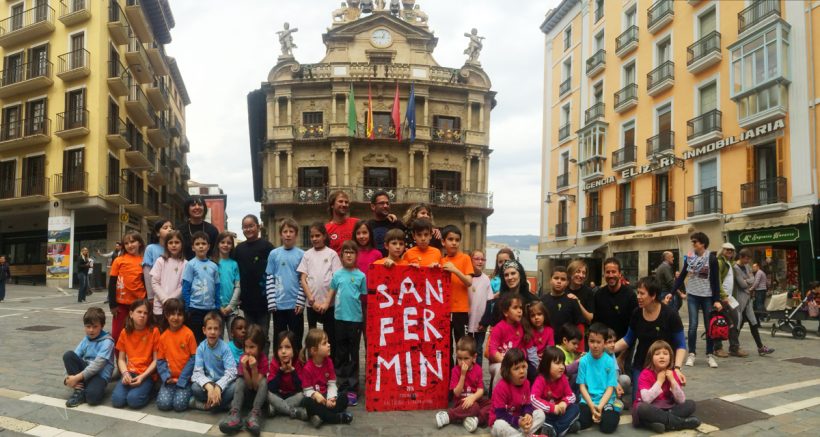 For the past six years this school has been sending in their work to the official annual competition to find a poster for the Sanfermin fiestas. The kids have done this as part of their drawing and art classes at school in the Public Primary School in the Pamplona neighborhood of Buztintxuri. Up to this year of 2016, this activity was just seen as a bit of fun, or a game, but now this year they have become the authors of the official poster, which will display everywhere the fiesta program of Sanfermin 2016.

With a total participation of 6, 078 people, (19% more than in 2015) 25,9% of the choices -1, 575 votes- went to the entry entitled “San Marrazquin”, which received 471 more votes than the second choice. In this video, you can see the faces of the kids when they learn that now they can announce to the whole world that they are the creators of the winning poster.

The poster was entered for the competition by Eneko Huarte, Patricia Martiartu, Mikel Mendibil Ainzúa and Mikel Santos “Belatz“ who are, respectively, members from the school head office, the teaching staff and the parents’ representative from the school board. In the small details found on the poster, the contribution from the kids can be clearly seen.

The Mayor of Pamplona, Joseba Asirón, was pleased to find an increase in the voting participation and equally pleased to find that most of the finalists were from Pamplona.

Eneko Huarte, a representative from the Public Primary School in Buztintxuri emotively revealed the excitement with which the news of the win was received in the school. And he explained how the work on the poster was done with the cooperation of children and parents to complete the work that will now announce the forthcoming fiestas of San Fermin.

Check for more details on the web page of Pamplona City Hall.