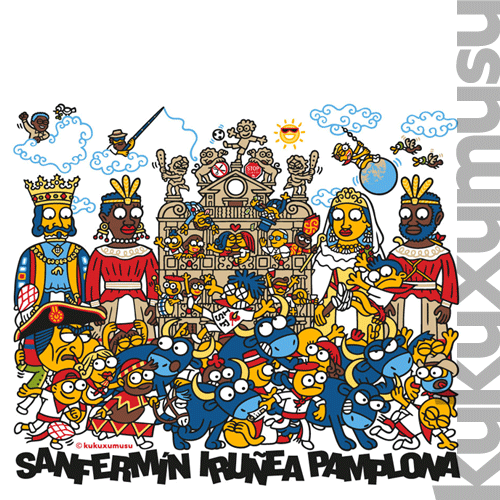 The Running of the Bulls and the moment when the Bulls pass across Pamplona City Hall square at eight o’clock on the dot is the precise moment captured by Kukuxumusu in its illustration for the Special Sanfermin 2014 T-shirt. The drawing has also taken a telling nod at all the current affairs of the day as it also brings together two of the most emblematic events of the fiestas – the Giants and their Entourage and the Running of the Bulls.
In the drawing there is room to pay homage to Nelson Mandela, to remember the accident-filled opening Txupinazo event of 2013; there is a drawing of a young woman on a swing a la Miley Cyrus as well as a drawing of San Fermín in the company of the new Pope Francis I. “At Kukuxumusu we have always considered ourselves graphic reporters of current affairs even if it done from a largely humorous slant”, points out Mikel Urmeneta, artistic director of the firm and the person responsible for the creativity behind this annual emblematic drawing which is always the most popular drawing to come out of the Kukuxumusu factory each year.

“This year we wished to bring together the two most characteristic events of Sanfermin fiestas: the Running of the Bulls and the Giants and all their Entourage. Thus, we have put the Giants standing watching the Running of the Bulls and the kilikis running in the event”, states Urmeneta. As for the goring in the center of the drawing, it is open to various interpretations, such as “a goring in the heart of a tee shirt or perhaps an ‘I love Sanfermin’ ‘till death us do part”. In short, “a complex drawing in a simple format and, above all, it’s 100% Kukuxumusu”.

Current news also makes its presence on some of the other T- shirt drawings in the varied Sanfermin 2014 Collection. From a kind of self-portrait featuring a bull and several accompanying figures, to the famous selfie style of the Oscars. There is even a bull found sitting on a throne with Crown and all, as if to say, like the popular song goes,” that it continues to be the King.” The Starfetos, those pixel characters that can be found on several of the T shirts, are also a novelty in this latest 2014 T-shirt collection.