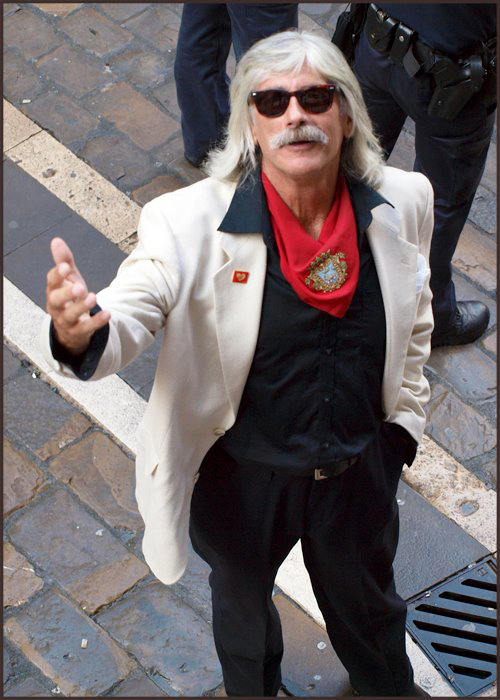 One of the great Sanfermineros passed away on Sunday 24th February, and although so much has already been written about this extraordinary and enigmatic man by his family and friends, and the news has gone around the world of course, I wanted to collect some of what I’ve seen and put it all together.

This piece isn’t just for those who knew and loved him, and his hundreds and hundreds of friends around the planet, but it’s also for those who read this site but didn’t know him, but might like to know a little about a man who didn’t just take Pamplona to his heart, but also had people from that great town take him to their hearts.

My thanks to everyone who has willingly and gladly, or unwittingly and unknowingly contributed to this montage of memories. I shall give credit where I can, but I hope most people who see their photos or words used will understand that they all, every one of them, have added something rather wonderful to this celebration of a unique man. Take it away, Bomber…

A RUNNER WRAPPED IN RAY BANS INSIDE AN ENIGMA

Bomber. February 6th 1948 – February 24th 2013. `When the legend becomes fact, print the legend´, Thanks to Rex Freriks for this version of a Jerry Roach photo, and for the great quote from the film `Who Shot Liberty Valance.´

I cannot claim to be one of those who knew Bomber well, to my great misfortune, but over the last few years I did get to know him a little, to my great privilege and pleasure. He lived an extraordinary life, travelling the world with the love of his life, Goldie.

Some of the people I shall be mentioning I know, and some I don’t. Here is just a very brief resume of his life, from someone I don’t know. It’s from one of his brothers, Roger, and was sent just after Bomber passed away.

Bomber and his beloved Goldie.

“Keith Baumchen was “The Bomber” or as he was known in Pamplona , “El Bomber”. He was dynamic, powerful and full of energy. He was born in the middle of Iowa on a large farm, the 2nd of four children. He grew up, however, in Southern California during the 50’s and 60’s. His childhood hero was Zorro. He was good in sports and played varsity basketball and baseball at Monte Vista High School . He was the fastest pitcher in the league. When Keith was young he was a very good artist, mostly oils with a brush or palette knife. He won awards and sold many of his paintings.

Bomber made Garmisch Germany his home base in the summer of 1976, a magical Bavarian town nestled in the Alps . He decided to become a world traveler and document his journeys with photographs. The following summer he met the beautiful Karen Anderson and nicknamed her “Goldie”. They became an incredible team with Goldie planning the trips and Bomber making it happen. They would do 5 to 10 month trips to every part of the globe during a span of 31 years. Each year they also went to Pamplona for the running of the bulls in July as well.

Goldie passed away summer of 2008 and Bomber has been on his own since. He was visiting friends in Coral Gables , Florida when he went down with cancer. It was Bomber’s wish to come back to his family in California . He died with hospice keeping him totally comfortable at the age of 65. Like a shooting star, “The Bomber” was a legend and an inspiration for anyone brave enough to take life to the limit.

My brother Bruce and sister Sue thank you for the kind words and unbelievable support. The response to the “El Bomber” facebook page has been incredible. It is impressive, to say the least, that over 500 people have commented on the message we sent out yesterday. We plan to keep it going and also would like to do a memorial in mid June, maybe Lake Tahoe …..what do you think?

There is of course so much more to a man like Bomber’s life than just a few paragraphs…but this is not about his life, but a celebration of it. Roger mentions Garmisch, where Bomber made his home with Goldie…well, this was Garmisch one evening this week…

Drew James Benson said of him, about how he left town for the last time towards the end of October:

“He slipped out of town quietly a day or two later, without a going away party or a fanfare. Like the true traveller he was, he slipped out of our lives the same way, quietly, quickly; off to the next adventure. I can’t believe he won’t return to Garmisch again this spring.”

Yoav Spicehandler said, perfectly and succinctly: “If a man be judged by the friends he had, then Keith “Bomber” Baumchen was a giant Sequoia. Tan bueno que era.”

On Sunday March 3rd Pamplona celebrated the third step on the stairway to fiesta. There was a service and mass held in the Church of San Lorenzo , where the figure of San Fermin is kept. Towards the end, there was a touching eulogy written by Chapu Apaolaza, and read out by Teo Lazaro Armendaiz.

I’m including part of the video here because just listen to what happens when Teo finishes speaking, around the 4 minute 7 second mark. Then, wonderfully, at about 4m 50, they sing a jota to Bomber and all runners. Marvellous stuff.

When news of Bomber’s death reached Navarra, one of the headlines in the local Diario de Navarra newspaper was “Goodbye to elegance in the bull run.” Bomber was pretty much the coolest guy many of us have ever come across, but when he dressed in honour of those folks “back home” in America who’d put on their Sunday best for church when he was a lad, and he put on his Sunday jacket to run with the bulls, well, I bet even the bulls felt the chill.

Elegant from tip to toe, in full respect of not just the bulls but for the town and the fiesta itself, Bomber was a true Sanferminero, accepted by the people as one of them.

There are so many stories, and so many photos, that it would be easy to go on, but, as George Harrison sang, all things must pass, so I’m coming towards the end now. If everyone could have just a little of what Bomber had, this beautiful planet we live on would be a better place.

I’m pretty sure that almost everyone who ever met him will not have forgotten him, no matter how briefly their paths crossed, and when they left him the world would have seemed a nicer place, there would have been a spring in their step, and their mood would have been better and if there wasn’t a smile on their face before they met him, I’ll bet there certainly was afterwards.

Bomber and Chloe, in a photo he sent her after San Fermin last year

Here’s what Chloe Drakari-Phillips said about this gentle soul: “Bomber encouraged me to take chances and whatever decisions I made to believe in them and never look back with regret. The advice he gave was second to none. He was kind, loving, artistic, modest, honest and had the biggest heart.”

Yup, I think everyone who knew him would agree with that. As I said above, I am so fortunate to have got to know him a little bit in Pamplona these last few years, and I will always take to heart his warm words of praise, and encouragement, about my attempts at writing these last couple of years. Said, of course, in his own inimitable way.
For my part, I’d just like to quote here something I put somewhere else about Bomber. It’s from “Last Night in Twisted River” by John Irving:

“We don’t always have a choice how we get to know one another. Sometimes, people fall into our lives cleanly – as if out of the sky, or as if there were a direct flight from Heaven to Earth – the same way we lose people, who once seemed they would always be a part of our lives.”

Sweet Runnings, Bomber. I knew you because of a place that is heaven on earth…Pamplona…and though you may be gone from this earth, you’ll always be a part of so many lives. I have no doubt that while you may be Resting In Peace now, with your beloved Goldie, you’ll also, both of you, be Running In Paradise. It was, and always will be, my pleasure knowing you.

A unique, enigmatic and in the true sense of the word, a beautiful man.

Jacobo Roura Formoso, on the right in the photo above, wrote: “Goodnight Bomber, never forget your freedom, Pamplona will always be yours. A hug, my brother.”

And Rick Musica, on the left above, amongst other things, wrote this last week:

“As sad as today has been, we must not be selfish and mourn OUR loss. Our loss was truly sad, no doubt about it. But, today, Bomber regained what was, truly, his most immeasurable loss, his Goldie. I am SO honored to have been a part of THEIR time here, and in the most magical place EVER!

As we gather this week (it was for the reunion in Florida) to celebrate our love of all things Fiesta, let’s take a minute to remember why we love it so much!

For all those who won’t be with us this week, you will NEVER be without us….

Tears, but mostly smiles, remembering the great times and people who make this what it is…

As is the case so often…well said, Rick.

When Jacobo wrote “Goodnight Bomber,” it is, all too sadly, true. But it’s only “goodnight,” that’s all. Bomber sleeps now, but his soul is with Goldie and they will be running together. And their spirits will be soaring like birds in flight, with only that sense of freedom and life that the bull run can give you.

For Bomber, finally, there are no limits, because for him, he’s made it. Ya falta nada…Viva! Gora!

A lovely video was put together by Jack Denault last week, which is just fantastic. The music and words to the song were just perfect, but he has allowed me to use not just his compilation, but to change the music too. Thanks Jack. You see, I wanted to, if you’ll excuse the pun, have some music with a bit of…San Fermeaning to it. Sorry…

He would probably be a little bit embarrassed by all of this, but for one more time, Bomber…take it to the limit!