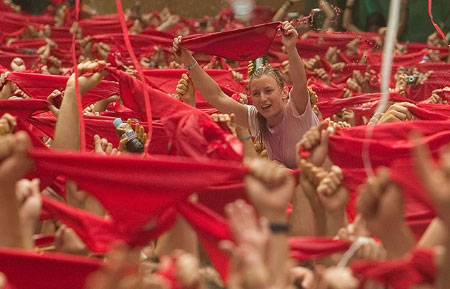 The Pamplona City Council has announced that Juan Carlos Unzué will launch the Chupinazo for the upcoming Sanfermin festivities. This news means one more step in the arguments that make us think that next July our beloved party will be celebrated. Juan Carlos Unzué is a former soccer player and former coach and, as the Pamplona City Council indicates in a press release, “since he made it public in 2020 that he suffered from ALS, he has become a benchmark in the fight against this disease, leading campaigns, talks, documentaries and books in which he recounts in the first person his coexistence with this ailment”.

When Enrique Maya communicated the decision, he pointed out that “with this appointment, Pamplona joins the visibility of this disease, the support for those who suffer from it and their families and the way in which Juan Carlos Unzué is facing ALS as a lesson of life, in addition to also recognizing the professional career of one of the best Navarrese football goalkeepers.”

According to the data provided by the Pamplona City Council, Juan Carlos Unzué Labiano (Orkoien, 1967) accumulated more than 300 games in the First Division. He made his debut in goal for Osasuna in the First Division in the 1986-1987 season. It was the start of a professional career that also led him to play for FC Barcelona, ??Sevilla FC, CD Tenerife and Real Oviedo. As a footballer, he has a European Cup Winners’ Cup and a Copa del Rey to his name, won with FC Barcelona in 1989 and 1990, respectively.

Already on the bench, he trained CD Numancia and Racing de Santander. Between 2013 and 2017 he formed a tandem with Luis Enrique and was second coach with him at RC Celta de Vigo and FC Barcelona, ??achieving a Champions League, two Leagues, three Copas del Rey, a Club World Cup or a European Super Cup with the Blaugrana . After that stage, already as head coach, he managed RC Celta de Vigo and Girona FC.

Work is being done on the celebration of Sanfermin 2022

In the same statement, the Pamplona City Council has transmitted that “it continues to work on the celebration of Sanfermines convinced that, in view of the current evolution of the health situation, it will be possible to celebrate the festivities, after two years of suspension.”  There have been people who, reading this sentence in an official statement, have burst into tears.

Remember that if you dare to come to Pamplona in 2022, living the txupinazo among the crowd is a highly recommended but somewhat powerful experience: from 11.00 or so the crowding is terrible and you cannot move a finger. It’s infernally hot, whatever the weather: from the mass rises a mist mixed with sweat, champagne and various liquids that fall on you from everywhere (there are those who even make some really disgusting mixtures: ketchup, cola cao, mustard, flour, shaving foam, etc.).

From the balconies they throw buckets of water at people to relieve suffocation. The pushes spread through the crowd like a wave. In some of these, large pieces of human mess go to the ground, and there is a general commotion not to trample on them. One last. After being in the square, people seem to come out of an old washing machine. Every year the medical services treat many bruised, fainted and suffocated, but usually there are no serious injuries.

Keep reading our tips to attend the Chupinazo de Sanfermin 2022.