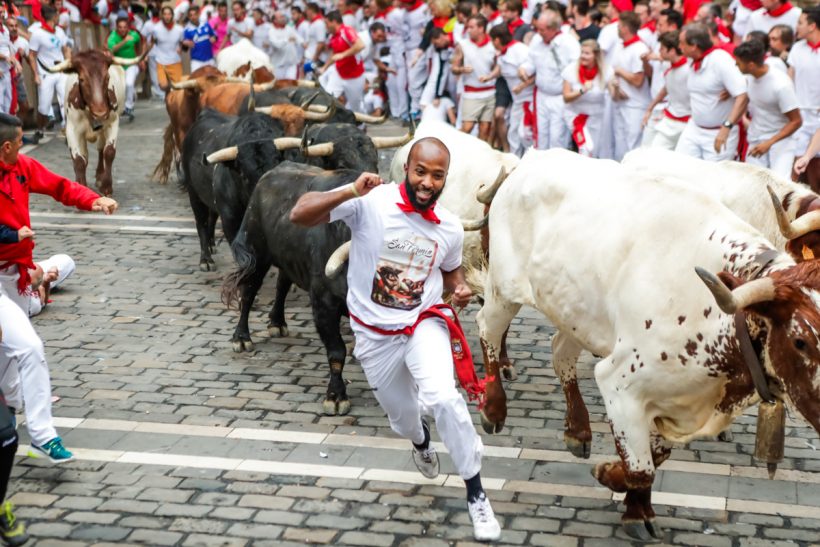 You come all the way from the other side of the world and you prepare yourself in a conscientious way to take part in the Running of the Bulls. You forego going out partying or drinking just to make sure that you are in perfect shape for the event. And just when the bulls in this fourth Running of the Bulls of Sanfermin 2017 come racing up, you go and trip over and fall and you are left without having even been able to see the horns. What a drag!

That is just what seems to have happened to this runner in today’s bullrunning which featured the Fuente Ymbro bull-ranch and which we can appreciate in this sequence of shots taken by Javier Martínez de la Puente. At the City Hall stretch, this runner has just begun to run when, with the bulls still a good distance behind, he trips up and falls face down on the ground. The runner should have followed the basic and sensible rule that states “once down, stay down”.

Only after the bulls have passed should a fallen runner attempt to get back on his feet. One of the most famous cases where a runner neglected to follow this essential rule was that of Mathew Peter Tassio who, twenty-two years ago and at this very same spot, also got back on his feet too soon and was charged and mortally gored to death by an onrushing Torrestrella bull.

This big, bearded black runner, wearing a tee shirt with the official Sanfermin poster, also got back on his feet when he should have stayed down. He was very fortunate to do so just seconds before the charging bulls arrived and he was able to run ahead and live to tell the tale. A lucky man indeed.

His smiling face says it all. He was able to have his run in front of the Fuente Ymbro bulls and live to tell the tale. A well-earned smile indeed. He is probably happy to have fulfilled his dream of taking part in the Running of the Bulls but he will probably never know just how close he was to suffering a very different fate.