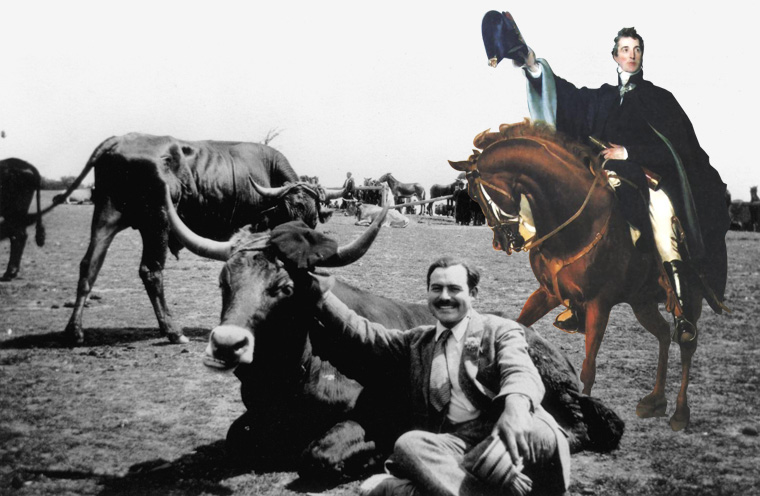 Photo: Hemingway and Duke of Wellington in 1924 at Sanfermin´s Livestock Fair

It’s strange to think that a little over 150 years before the monument to Ernest Hemingway was unveiled in front of the bullring (on July 6th, 1968, with his widow, Mary present), there could already have been a statue of the Duke of Wellington in Pamplona.

Had they commissioned it, I have no idea how long it would have lasted…not very long, I imagine…longer perhaps than the one ofTeobaldo the 1st, whose statue was in Taconera Park, Pamplona, and disappeared in 1936, and certainly longer than if they had constructed one in San Sebastian! (Even today, if you dared put one up there, I doubt it would last a minute!). One of the differences between the two cities while Wellington was in Spain is that, whereas San Sebastian was besieged, Pamplona was only blockaded.

For those who want to know a little European history, Arthur Wellesley, the Duke of Wellington, (born in Dublin), was in charge of the British and Spanish forces, (and yes, some Basque) and mercenaries who were ordered to rid Spain of Napoleon and his French and allied forces, including his brother, Joseph Bonaparte, who Napoleon had made King of Sicilly and Spain. Known in Britain as the Peninsular War, it lasted from 1808 (when they invaded via Portugal) until 1814. In Spain it’s known as the War of Independence, and it caused Napoleon such problems that he called it his “Spanish ulcer”.

The French garrison at Pamplona finally surrendered on 31st October, 1813, and the starving town was free. And the statue to Wellington? Well, more of that later.

Fast forward nearly 200 years, and this year sees the 50th anniversary of the death of Ernest Hemingway.

He had already prepared for his visit to Spain for the summer of 1961. He had his bullfight tickets reserved for the corridas in Pamplona, and his accomodation was arranged. He was ready, like so many of us foreigners are every July, to make the return to a city that is like no other.

But was he really ready? Or had he been deluding himself? Although he was only 61 (and would have been 62 years old on July 21st of that year), he was an “old” 61. The years of drinking and partying, and of, yes, action and accidents, had taken their toll. Not to mention the demons that were having their own particular fiesta inside his head and were tormenting his very soul.

Now, if you have depression it’s a serious thing. For example, for the few of you who may understand the next two words…remember Gavilan. Depression can kill.

And for so many of us guiris, the beautiful thing about the fiesta of San Fermin is that we can join in. We are not only spectators, but participants. We are part of it, and it’s a wonderful feeling.

Whether he was ready for Spain or not, one thing is certain. At about 7 in the morning of Sunday, July 2nd, 1961, at his home in Ketchum, Idaho, Hemingway woke up, and went downstairs to the kitchen where there was a special key. Outside it was a bright and cloudless day.

The key was for the storeroom in the basement, where among other things he kept his guns. He chose an English one he had bought from Abercrombie and Fitch, a Boss double-barrelled shotgun. He put two cartridges in it and went back upstairs, and crossed the living room to the oak-pannelled entrance foyer. It would have been quiet, so quiet, fifty years ago on that early sunday morning. Then he put the gun to his head and pulled both triggers.

And so ended, by his own hands, the life of an extraordinary man. Whatever you think of him, or his books, he was a huge figure of the 20th century. Depending on your view, and knowledge of him, he was either a great writer, or an awful one. He was a good man, or a bad one. He was a genius, or a devil, fun to be with or a pain in the ass. He was a drunk, a liar, a boaster and a bully. He was also, to quote his original biographer, Carlos Baker, “the perpetual student, the omniverous reader, the brilliant naturalist, the curious questioner…” One thing he never was though, whatever your opinion, is boring.

By all accounts, if you were lucky enough to be at a table with him, you were in for a rollercoaster ride of a party. He was a thousand different things, some good, some bad. Human then, just like the rest of us, except most of us aren’t multi-million selling authors.

So, for bringing this wonderful town of Pamplona, and it’s extraordinary inhabitants, to worldwide attention (and hence bringing people like me to it every year), thank you, Ernest Hemingway. I can’t say that Pamplona or it’s fiesta wouldn’t have been world famous anyway, even without his help, for I truly believe that Pamplona and Navarra, and it’s inhabitants, are somehow blessed by some special spirit that runs through their blood, so that when it comes to fiesta time, or indeed anytime…magic happens. Pamplona and its’ fiesta would have been famous whatever the case.

But without Hemingway kickstarting the process, it’s doubtful I, or any of us, would know of San Fermin or of Pamplona in quite the same way that we do, or have the best friends on the planet that we do. Oh, and Pamploneses? I’ve always said that there is something beautiful about you, algo bonita, and yes, something impeccable. And there is.

Every year before fiesta a red scarf is placed around the neck of Hemingways’ statue, which I always think is a nice touch. It’s as it should be. Old Papa Hemingway is ready for San Fermin. I’ve never seen it done, and can’t honestly say if there is a special ceremony or not, or even who started it. My guess is it was done at the unveiling in ’68, and the tradition carried on every year after that. Maybe someone out there knows, or was even there…

So, finally, what of the statue of the Duke of Wellington?

Well, thanks to a book I bought about 10 years ago, I know a little bit about this. The book is by Carlos Santacara, a writer born in Bilbao but of Navarran parents, and is called “Navarra 1813”, and is a factual account of the British soldiers (and the foreigners who fought with them, such as the Germans or, if I remember correctly, even an American),and their experiences during the Peninsular War, and the letters they sent home.

Apparently, the people of Pamplona were so happy to see their liberators, that as the British marched into town they were greeted with cries of “Viva los Ingleses, viva los Ingleses!” (Can you imagine!)…I don’t know if there were any cries of “Gora ingelesak” though…

So happy were the townsfolk to be free again that the Town Hall wrote to Wellington asking him if they could erect a statue of him, to show their gratitude. The Duke of Wellington, who hadn’t actually entered the town, but had been many times on the outskirts, wrote back declining their offer, while at the same time expressing his gratitude for the sentiment.

So, there was to be no statue to that famous Englishman, the Duke of Wellington. Silly, really, to think that Pamplona would erect a monument to an Englishman. Why, that’s as silly an idea that they would erect one to an American…