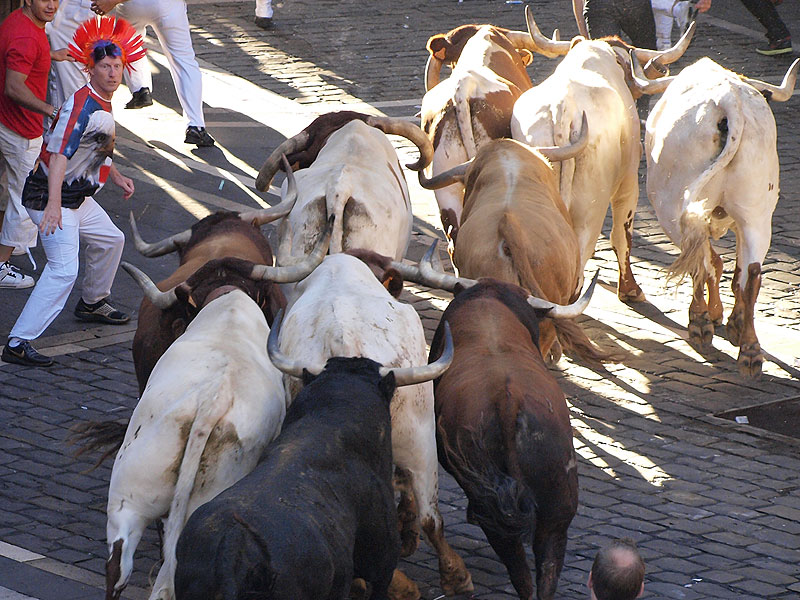 Most of the runners who take part in the running of the bulls in Pamplona dress in the traditional red and white gear and which this year has been particularly encouraged by Pamplona City hall as part of their campaign for uniform dress. But, there are still those who wish to have their moment of glory, not because of what they do in front of the bulls, but rather for standing out in the crowd by dressing up in weird and wacky clothes. And this tendency would seem to be on the increase. 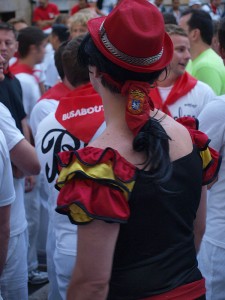 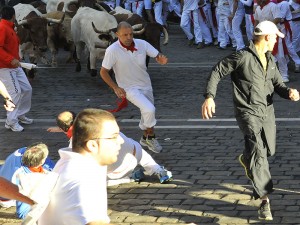 Colorful flamenco gear, runners dressed in kimonos, Superheroes, crests and wigs of all colors, all go to form part of the garments of some of the more bizarre “fauna” that can be seen at the Sanfermin bullrunnings. In spite of the campaign, and the issue of an edict which states that the proper dress should be the traditional white gear, and that sensible footwear should be worn, some runners continue to dress up for the running. But the municipal police are keeping a vigilant eye on the runners and in some cases, as happened this morning with the runner who was dressed as a flamenco dancer, these people are removed from the course and prevented from taking part in the running of the bulls. This is to prevent them from being a potential hazard to the other runners.

Particularly on the Estafeta stretch of the course over these past few years, one can find more and more runners who are dressed in bright colorful tee shirts and phosphorescent casual shirts so as to be seen all the easier on TV and in photographs. Nevertheless, there are still a majority who are dressed more simply in the traditional anonymous white and red, who simply wish to run against the bulls as well as they possibly can, without more ado.

Then there are those, who like another runner in this morning’s running of the bulls who, go for the most simple and comfortable of all; a track suit, but not a white one, but rather a black one.

Photos from the 13th of July