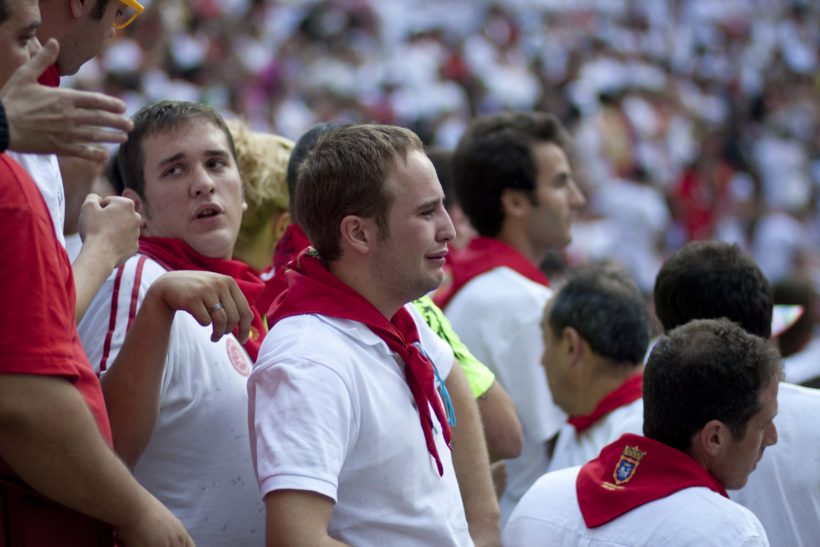 As the pack of bulls raced into Estafeta Street, there were already a tight pack of runners starting to rush into the narrow entrance to the bullring. Many runners began to realize that a pile-up was forming and turned back out, especially as the numbers of runners entering began to thicken and make the situation more dramatic. From the TV screens it was clear to the viewers that the bulls were approaching and the figures of some of the people in authority, such as the bull-minders, police, ringside workers and some runners all hurried to try to unblock the situation.  A side gate was opened to try to ease the conglomeration of bodies. However, soon the worst fears were realized. A pile-up of runners formed and the situation turned desperate for the anxious runners caught together at the entrance to the arena.  Some viewers could identify people that they knew; the close-up images of the TVE left the whole square in a shocked silence. Only when the bulls and bell-oxen were led through a side-gate did people begin to react and start to extricate the human pile-up of bodies. Many people were in tears from the intense anxiety they were undergoing. Friends and acquaintances were looking for one another. One person suffered a heart attack and had to be taken away to hospital. But not only the runners and public suffered the intense anxiety. The authorities and the bullring workers were also being forced into taking rapid decisions which created moments of tension and confrontations which gradually died away as they all rushed to help the injured runners pulled from the suffocating pile-up.