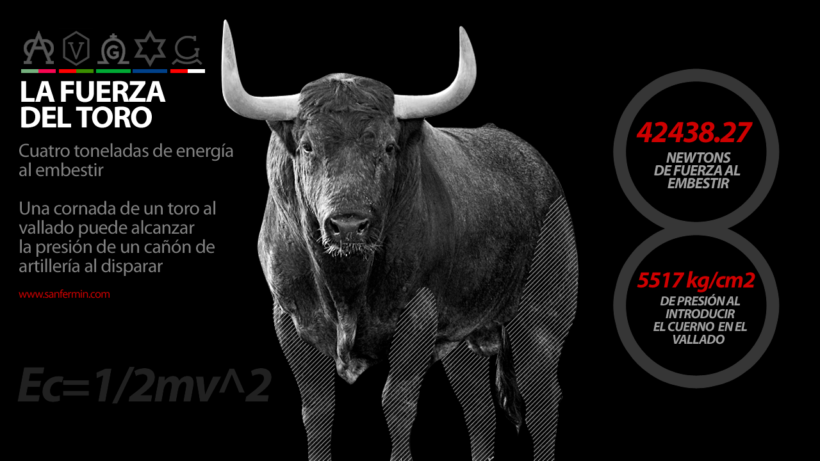 Today it is the turn for some mathematical facts which will help us learn some figures that will justify our fear of the fighting bull and which will reveal the dangers of a fighting bull on the streets of Pamplona in Sanfermin. To begin, let us take a bull with a weight of 550 kilos and which moves at a rate of 10 kilometers per hour.

How much energy is contained in a bull of 550 kilos and which moves at 10 km/per hour?
That is the energy that hits against the hoarding or fencing along the stretch of the course, or, in a worse scenario, hits against a runner. Energy of a body in motion is called kinetic energy and comes from the formulae:

We multiply the mass per squared velocity (expressed in squared meters per second) and we divide in 2. The result, substituting the terms, is 2121.91 Joules, which is the International System Unit for Energy. As an estimate, standard safety footwear only has a resistance of 200 joules. If a bull were to dissipate all its energy on the point of some safety footwear, it would blow it to smithereens.

Now this energy, (which is neither created nor destroyed but rather transformed) we will now invert by piercing a wooden post with the horn of a bull and bring the bull to a total stop in the not inconsiderable quantity of five centimeters. That is to say, the horn makes a five centimeter orifice in the wood and the bull remains totally static.

The effort (energy) to do that gives rise to the formula:

Thus, Pressure P=42438.27/7.85E-5=5.41E+8 Pascals=5517 kg/cm2, a pressure very similar to that found in artillery cannon. (A footnote for all you engineers, physicists and mathematicians: A spherical bull of R Radius has been assumed for this situation –spherical cow theory-.)

In conclusion, a goring with a bull’s horn has sufficient energy to destroy a runner. That point should be borne in mind by runners before they decide to enter the course. (This article was written with the help of Alfonso Aparicio, engineer.)