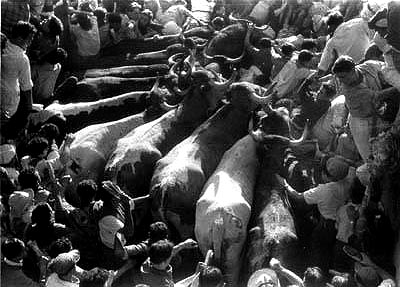 It is now 60 years since a double pile-up of runners took place at the entrance to the bullring and which “trapped” the bulls in between. The accident happened on the 7th of July, 1943 and this is one of the earliest references ever made to a pile-up in the history of the running of the bulls in Sanfermin, and also one of the most dangerous up to now.

This double pile-up happened when some of the runners fell together at the mouth of the entrance leading into the arena. This meant that they blocked the path of the bulls coming behind. On seeing this situation, many runners coming behind turned back round and racing out of the entrance they also fell and created a second pile-up. The bulls were trapped between the two tight pile-ups of human bodies for more than three minutes.

Luckily, the bulls managed to make their way into the arena by climbing over the sprawled pile up. The runners were then pulled apart. There were no serious injuries but many runners needed some treatment for painful bruising from the hooves of the passing bulls.