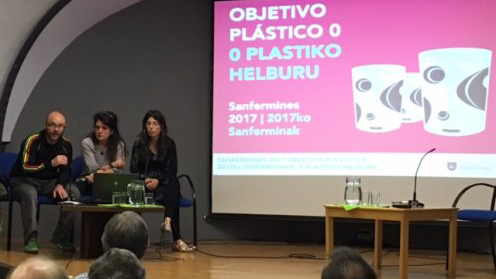 This afternoon, the Area of Urban Ecology and Sustainable Mobility from Pamplona City Hall, has invited representatives from the catering and bar sector as well as other interested citizens to a meeting – discussion session in order to present an outlined plan to promote the use of recycled drinking glasses during the Sanfermin fiestas of 2017 in the hope of achieving more sustainable fiestas this coming July. While some details remain to be agreed upon, the target of, “0 Plastic” is the aim behind these steps to try to replace the throwaway plastic glasses which have been in use over these past several years. It is hoped to reduce the garbage content of the plastic glasses by some 75% (56.000 kilograms less). Some earlier experiments carried out at other large -crowd events such as Nafarroa Oinez, Gora Iruñea, Bayonne, Terrassa as well as some other smaller trials made by the City Hall of Pamplona during Sanfermin Txikito in September, have led the authorities to believe that there exists a good base on which to try to implement the changes for the coming Sanfermin fiestas in 2017.

Armando Cuenca, the councilor responsible for the Area of Urban Ecology and Mobility, stressed that the theme of ecology goes beyond the realm of partisan politics and he is aiming to achieve sustainable fiestas during the coming Sanfermin fiestas.  Camino Jaso, managing director of the Area Ecology, explained that there is a strong concern at international level about contamination that is not so clearly observed and where plastic plays a leading role. Furthermore, she went on to explain that “at the moment there is a big problem in relation to the environment in Sanfermin, particularly with the throwaway plastic glasses which are not recyclable”. A reduction in the use of these plastic glasses would provide a big improvement for the citizens in the sense that there would be an immediate improvement in cleanliness in the street and a recuperation of hygiene standards in the bars and catering premises. ”. Jaso also went on to state that communication about this campaign would be important and she believed that those bars and pubs taking part should share a common motif and the publication of a map outline. Marina Jimenez, an environmental technician in Pamplona City Hall, was given the task of explaining the details of the plan which can be summarized in five points:

How the recycled drinking glass system will work step by step:

1-.The bars and pubs will buy the drinking glasses at a price of 0.30 euro per glass before the start of Sanfermin fiestas.
2-. The consumer on the premises will pay 1 euro above the price of the consumption for the glass, if he or she does not already possess a glass. If the customer enters with a glass, he or she can ask for their consumption to be served in the same glass and, should the glass be dirty and the customer wants a new one, the glass can be replaced by another clean one without any extra charge and the bar keeps the dirty glass in exchange and this glass will then be washed and renewed.
3-.The glasses will be taken in by the bars and pubs at the end of the day and new ones will be handed out in exchange. Some special vertical cylinder containers will be made available for this exchange and with a system for headcounting the transactions.
4-. All these renewable glasses may be returned at any of the bar or pubs that participate in the campaign and the original one-euro deposit will then be returned to the consumer.
5-.At the end of the campaign the glasses will be re-bought from the bars at a price of 0, 20. Since it is estimated that 35% of the glasses will not be returned to the bars, the operation should not be over burdensome for the bars and pubs.

Questions raised during the session

The session continued with a series of questions raised by some of the interested parties such as Casa de Misericordia, Peña La Jarana, Peña Muthiko Alaiak, members from the Navarra Government Area responsible for Garbage and Waste and for Sustainability, the Federation of Regional Associations and the Consumers Watch – Consumidores Irache, among others. The feasibility of actually carrying out the plan raised some reservations and was at the root of many of the questions. A summary of these questions are outlined below:

-(Muthiko) One member of this Peña club pointed out that there are some Peña clubs which consume 6.000 glasses each day and some people might have to put forward quite a lot of money in order to follow this new system.
A member of the Federation of Regional Clubs stated that the trials carried out so far have worked very well as, in the end, the system is totally free. It was also stated that it was hoped that there were no obscure sides to this ecological idea, in the sense that there could possibly be some underhand business behind the idea, that would benefit some particular people, as sometimes happened in these cases.
-One person representing the Government of Navarra from the Garbage Control sector pointed out that it might also be a good idea to follow some ideas in the study carried out by Crana in order to elaborate the “A Guide to organize sustainable fiestas by the entities involved“.
-One person representing the Government of Navarra Sustainable Plan pointed out that it is important to avoid having the drinking glass become a form of currency that might create some picaresque situations. (It was stated that in some of the trials a ticket was handed over along with the glass and which was necessary to show when the glass was eventually returned. Just collecting the drinking glasses and returning them without a ticket would mean that the one-euro deposit per glass would not be returned. (Nevertheless, it was also pointed out that, even if such picaresque cases arose, the fundamental aim of recovering the drinking glasses was still working well.)
-(La Jarana) A member of this Peña club raised the question of how the drinking glasses of Gora Iruñea and those of this present campaign would work side-by-side while those from Gora Iruñea were financing their continuity and those from City Hall were implementing a different system.. (Gorka Izko, from Gora Iruñea, stated that they were still working on a solution to that possible situation.)

Garbage in Pamplona during Sanfermin

Ángel Álvarez, chief of the entity in charge of collecting garbage in Pamplona, had the task of providing some statistical information of the garbage collected during the fiestas, especially in the old quarter of the city. On a normal day of the year, some 9, 67 tons of garbage is collected from the old quarter of the city. . In Sanfermin, the average figure for one day during fiestas comes to 113 tons, although it has been known to reach as high as 154 tons on a 7th of July (the saint’s day). Since 2016 the different kinds of garbage is collected separately to facilitate recycling and some 42% of the 1,1 million de kilos collected last year was recycled. With regard to the drinking glasses, Álvarez pointed out that a ton of drinking glasses not recycled, would come to a figure of 250.000 drinking glasses. These have to be collected over a wide and disperse area and only hinder the need for a fast and efficient method of cleaning which is so necessary to carry out during Sanfermin.

Since 2007 both Gora Iruñea as well as the Federation of Ikastolas schools have been using this method of recycling in their different events, where there are big crowds present and their experience has been a big help in the elaboration of this present plan. In addition, the experiences and trials in Terrassa and Bayonne  were also examined and studied with Martine Bisauta, the assistant mayor and the person responsible for Sustainable Development and Urban Environment in Bayonne town hall. Furthermore, Salvador Pérez, the person responsible for information and environmental education at the town hall of Terrassa also contributed some key advice and help. Gorka Izko, from Gora Iruñea, and Marta Igoa, from the coordination team of the Federation of Ikastolas, also stressed that the use of the recyclable glass was now something fundamental in their organization of events.

Izko insisted that the difference in the state of the sites after their events has been enormously improved since they started using these glasses and that many young people now see it as something natural to take a glass with them from home to use during the events. Some photos were shown of the state of the terrain both before and after an outdoor event and it was hard to believe that the background could be so clean after the crowded event. However, Igoa pointed out that the success of the Federation of Ikastolas schools was also thanks to the good collaboration of the local authorities and to the training given to the volunteers who worked at these festival sites. Marta Igoa also pointed out that the locations for the return of the drinking glasses should be different from those locations where consumption is taking place.

A bit of recycled art

In order to celebrate these workshop sessions on recycling drinking glasses which were held in  Calderería 11, two artists, Iosu Zapata and Daniel Resano have set up an artistic representation. The piece shows a sculpture hanging in the air, in the form of a recyclable glass made up of plastic containers ready to be recycled.